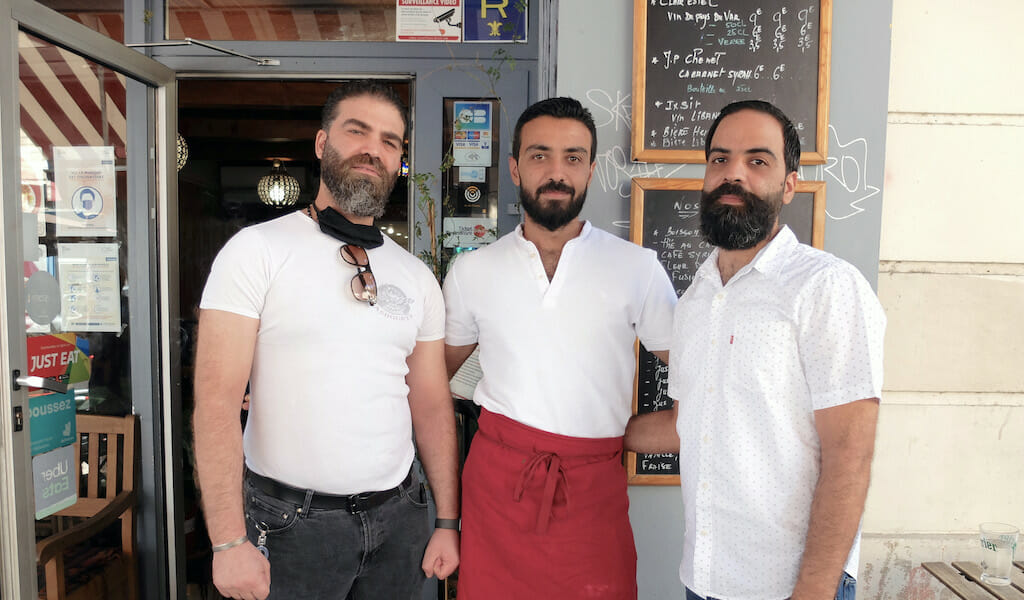 In Total Kheops, the first book in his iconic Mediterranean noir trilogy, Jean-Claude Izzo writes how Marseille is “a place where no matter who, and no matter what color, can descend from a boat, or a train, his suitcase in hand, without a cent in his pocket, and assimilate in the sea of other men…”

Crossroads city, transit city, refugee city, promised land. For over 2,600 years – Marseille has the longest-operating port of any coastal Mediterranean city according to AGAM (the city’s Department of Urban Planning) – immigrants have disembarked in the harbor here, creating a cosmopolitan culture that is unique in France.

Certain immigrés – Piedmontese builders, Corsican sailors and Neapolitan fishermen – came to work in their trade. Some were trained when they arrived, like the Kabyle (Berbers from Algeria) work force that powered the city’s sugar refineries and olive oil mills. For a family of more recently arrived political refugees from Syria, Marseille has been the springboard for an unexpected culinary success story.

Run by the Alibrahim family, Ashourya is a temple of Syrian cooking located steps from the tree-lined calm of Boulevard Longchamp. The restaurant has a laidback atmosphere, yet the Alibrahims are passionate about sharing the flavors (and other cultural riches) of their homeland, which they view as a counterweight to the stories of political unrest that dominate the news from Syria. 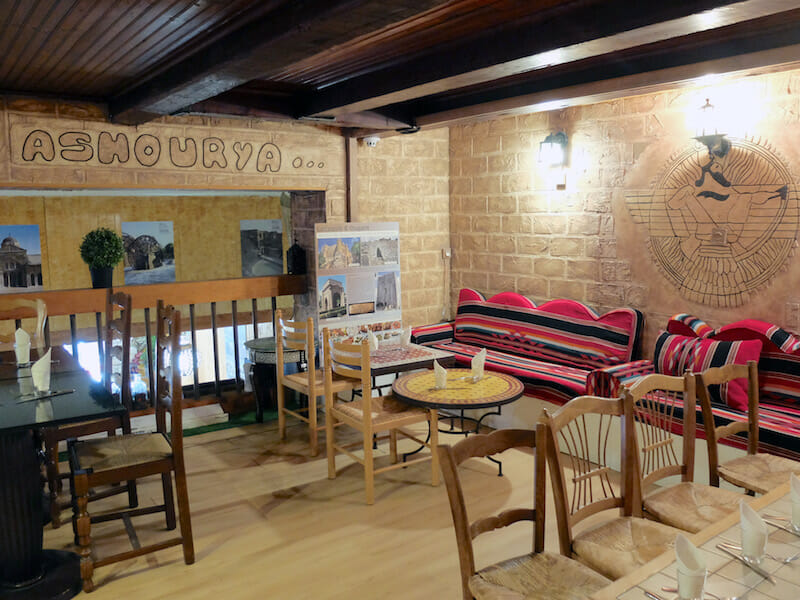 The family found asylum in Marseille in 2013. From Deir ez-Zor, an eastern region on the border of Iraq, they were drawn to the similarly warm climate of the port city. Like many immigrants uprooted from their home, they struggled to find work in their former fields – agronomics and petrochemicals. Part of the issue was a lack of French; though France once occupied Syria, English is now often the second language studied in schools.

The three brothers – Magd, Faras and Mohamed – got hired at restaurants around the city. Meanwhile, their mother, Majda, famous for her phenomenal home cooking, applied for a professional cooking diploma and was then chosen to be part of Des Étoilés et des Femmes (Stars and Women), an Alain Ducasse-sponsored initiative that invites immigrant women to train in the kitchens of star chefs.

Galvanized by the program’s success, the close-knit family pooled their collective experience and savings to open Ashourya in 2017. Their restaurant sits appropriately beside the former headquarters of another cross-Mediterranean success story, Picon, a bitter-orange aperitif created by a Genoese-born Marseillais in colonial Algeria before moving his factory to Marseille.

The brothers soaked up their mom’s cooking know-how, which she had previously learned from her own mother.

Though the first-time restaurateurs had limited means and were unable to import goods from Syria, they still managed to create a homey environment that evokes their heritage. There are low brass tables carved with Islamic geometric motifs, glowing metal globe lights and a tiled fountain that gurgles like the wooden norias (water mills) near the city of Hama.

Upstairs, the cushioned seating is made with colorful Syrian fabric that they happened to find in a shuttered restaurant in Aubagne, just outside of Marseille. Bookended by stonewalls painted with the Assyrian flag and Ashur, the supreme god of Assyria, this cozy mezzanine (and the restaurant’s name) honor the ancient land on which modern Syria sits. While the wood-paneled walls feature postures of famed sights from across Syria: the medieval Sahyun Castle in the mountainous northwest and the grand Roman theater in Bosra.

Majda has recently stepped back from her restaurant duties to let her sons take the reigns. “Since we’re a family without girls, we all helped out in the kitchen,” explains Magd, who is now acting as chef. The brothers soaked up their mom’s cooking know-how, which she had previously learned from her own mother. Magd then went on to hone his culinary skills while studying away from home – he often cooked for himself and his roommates.

Ashourya’s menu features dishes from across Syria. The brothers will kindly explain their preparations if you’re not familiar with them. We adore the maldoum, melt-in-your-mouth eggplant stuffed with ground beef and peppers. Another crowd favorite is sabanikh (the Arabic word for spinach). After boiling the greens with a bit of sugar to maintain the color, they are sautéed with onions, garlic, coriander, cumin and ginger. So tasty that even carnivores will swoon, this is one of the many vegetarian and vegan-friendly dishes on the menu. 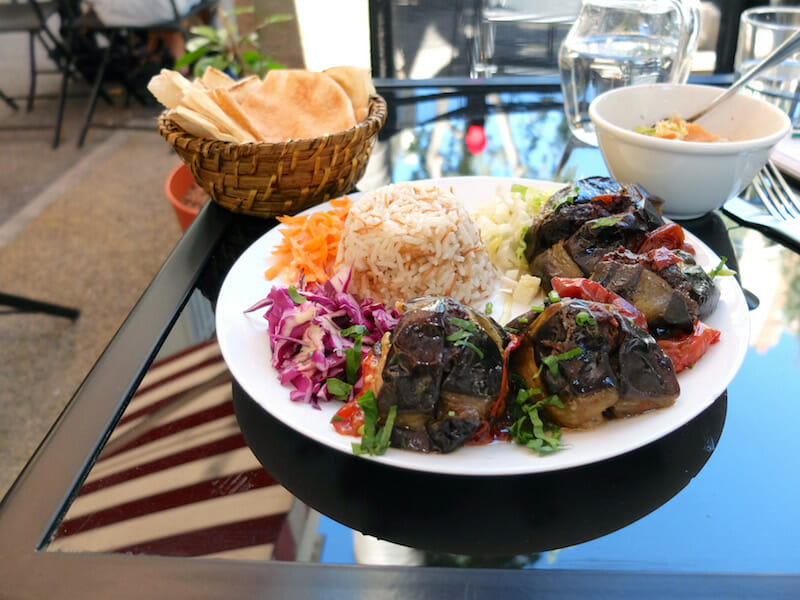 The sandwiches are ideal for an inexpensive meal. Order the falafel or the fromage syrien, AKA akawi in Syria, a salted cheese that Magd imports from Belgium. Wondering what mortadella – a pork sausage from Italy – is doing on the menu of this halal restaurant? In Syria, and across the Middle East, it’s actually a popular brand of tinned beef, Zwan, which resembles Spam.

Each main course comes with fattoush – a green salad tossed with pita chips and a delicious dressing of sumac, coriander, cumin and pomegranate molasses. Like kefteh (ground meat patties) and freekeh (green wheat pilaf), these Levantine dishes reflect the Eastern Mediterranean’s role as a culinary crossroads.

The drink menu features refreshing smoothies and juices alongside Almaza, a Lebanese beer. One special Syrian beverage is an herbal tea, fleur de damas, which “Syrian moms give their kids when they’re sick,” Magd explains. Order that or a thé á la menthe (mint tea) to pair with a medley of pastries that are less cloying than the pâtisseries orientales from the Maghreb and Turkey. Faras, the brother in charge of desserts, also makes typical sweets like halawat el-jbn (semolina and sweet cheese rolls) and mamounia – a creamy flan made with semolina, mascarpone, pistachios and fleur d’oranger (orange-flower water).

The third brother, Mohamed, shops for ingredients and helps in the kitchen. Like the rest of the Alibrahims, he “likes working as a family because we trust each other.” Together with their staff, which is made up of other refugees from Syria and Iraq, they offer friendly customer service that attracts repeat customers. Some come from Marseille’s small Syrian community, around fifty families or so, according to Magd. Half of the clients live nearby, while the others are a mix of locals and tourists.

Ashourya’s popularity has spawned an all-you-can-eat Sunday brunch (on hold due to Covid-19 restrictions) and a soon-to-open second location in Cours Julien. Their success is a testament to their talents – and the fertile ground that their adopted home has provided for some immigrants. “Marseille belongs to those who live here,” Jean-Claude Izzo continues in the passage quoted above. “Just a foot set on its soil, and a man can say, ‘I am home.’” 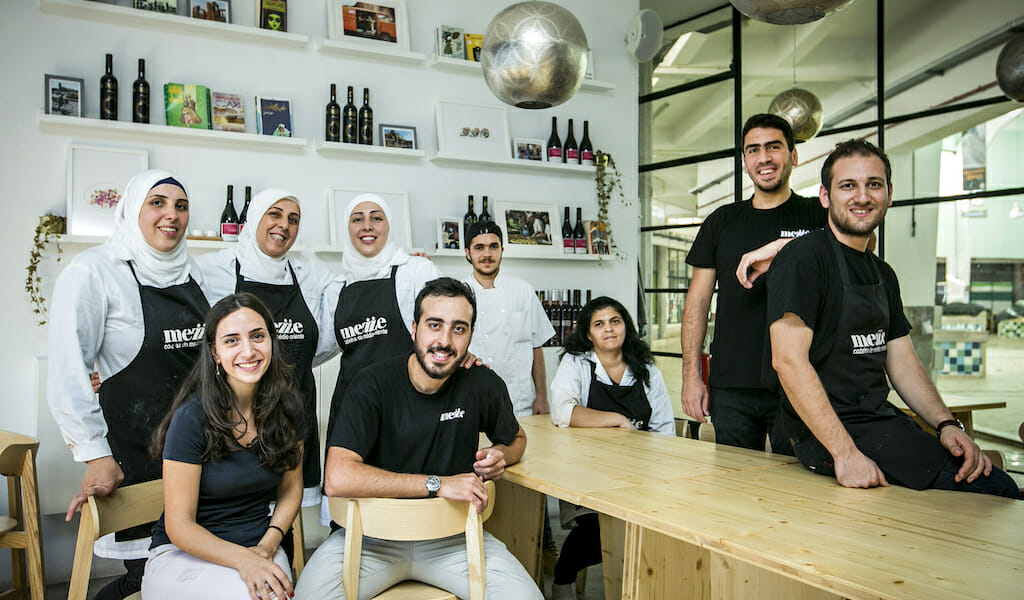 Lisbon | By Célia Pedroso
By Célia Pedroso
LisbonIn a market as diverse as Lisbon’s Mercado de Arroios, where people from all over the world shop, Mezze doesn’t seem out of the ordinary. But the small restaurant deserves a closer look: it’s not only one of Lisbon’s few Middle Eastern restaurants, but, more importantly, its staff is almost entirely made up of recently… 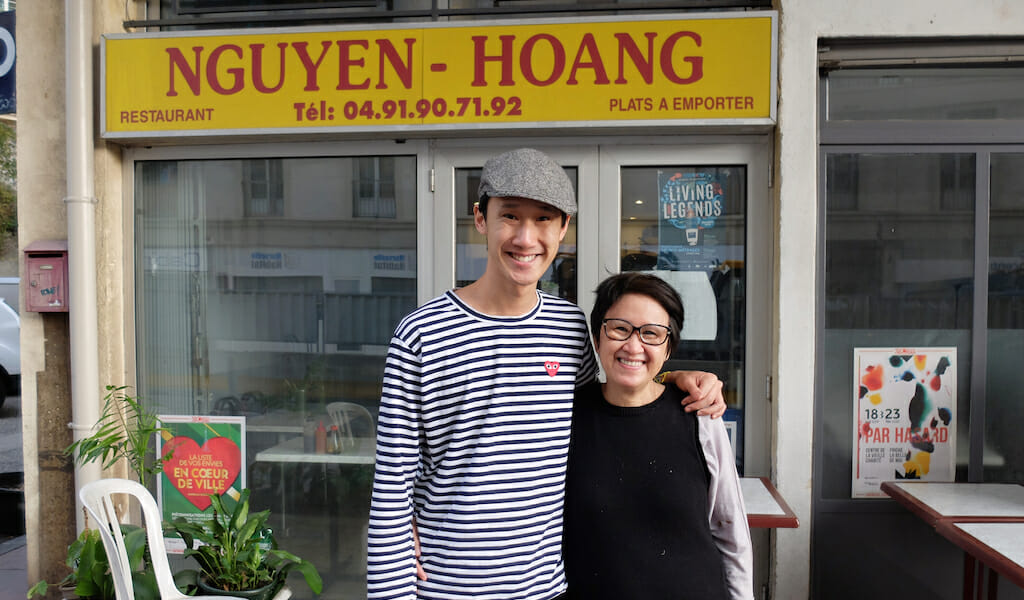 Marseille | By Alexis Steinman
By Alexis Steinman
MarseilleAfter the Vietnamese War, many of the refugees bound for France landed in Paris. A minority spread out to other French cities like Toulouse, Lyon and Marseille, the latter being a ville refuge (refuge city) due to its bustling port. The small community in Marseille used to be concentrated near Joliette, before its building boom.…
Ashourya
3 Blvd National
Tel. +33 6 52 95 88 82
Hours: Tues.-Sun. noon-3pm & 7-11pm