Even as traffic slithers to a crawl west of the 405 Freeway on Santa Monica Boulevard, drivers may be hard-pressed to notice the small storefront known as Naan Hut standing on their periphery.

Neither its name nor its red-and-yellow signage offer any indication that a 1,000-year-old Persian tradition of baking naan sangak is upheld within these walls in the heart of Tehrangeles, the unofficial name for the West L.A. stomping grounds of L.A.’s Iranian diaspora. 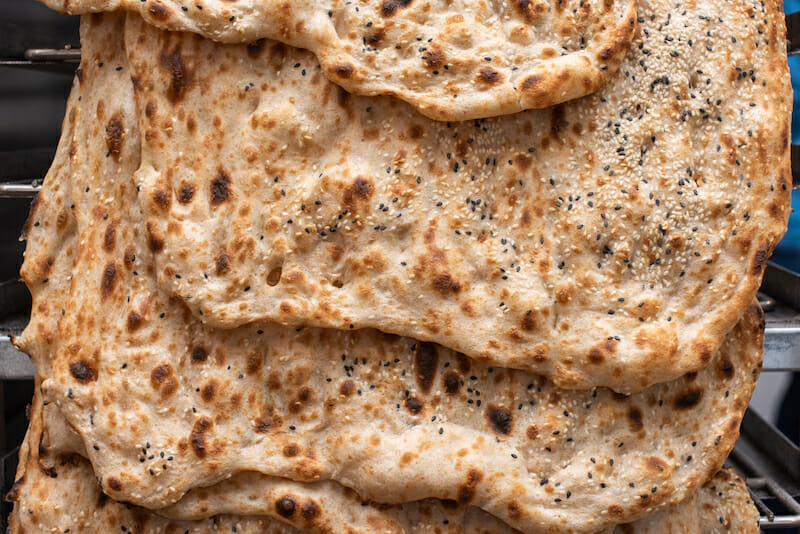 An ancient bread, legend ascribes the origins of sangak to the 10th-century Persian military. Soldiers would march together carrying small river stones known in Farsi as “sangak,” arranging them together at their day’s destination to aid in the special technique of baking this bread come chow time.

Inside the Naan Hut, baker Jesus Osorio instinctively dances the same choreography each day. First, he plunges his hands into a steel cauldron of wet dough; a simple alloy of half-wheat flour and half-white flour mixed with yeast, water, salt and a small pinch of sugar made 45 minutes prior.

Next, he plunks a solid splatter of this wholesome slurry onto a metal plate sprinkled with black and white sesame seeds, forcing the dough to run off the plate’s sides. Hoisting the rapidly stretching mass into a giant oven, he arranges it lengthwise onto an iron cooking surface inside, which is peppered with rounded, raised impressions, replicating the small stones of traditional sangak ovens. 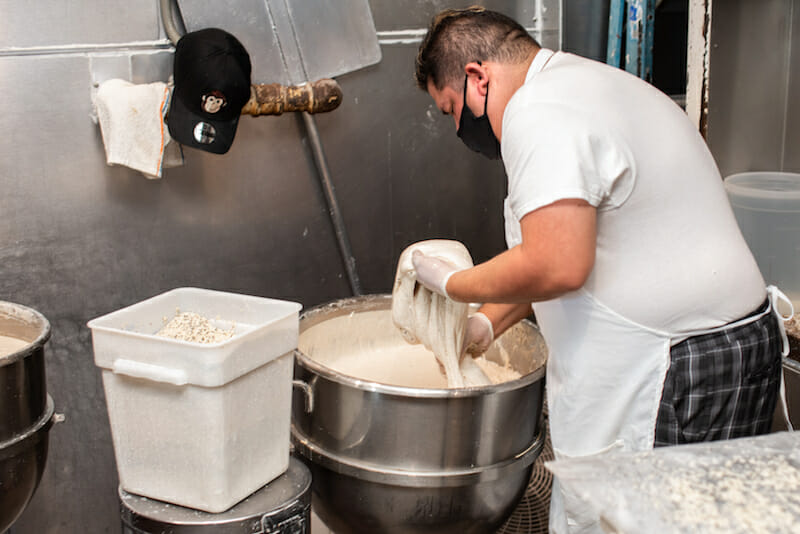 Naan Hut sells roughly 300 of these warm, fresh breads each day for customers to bring home, typically folded over the crook of their elbows. These are the customers the bakery and restaurant opened to serve in 2010, recognizing that L.A. didn’t have a destination for this elite, laborious staple of the kitchen that has many uses at the table. 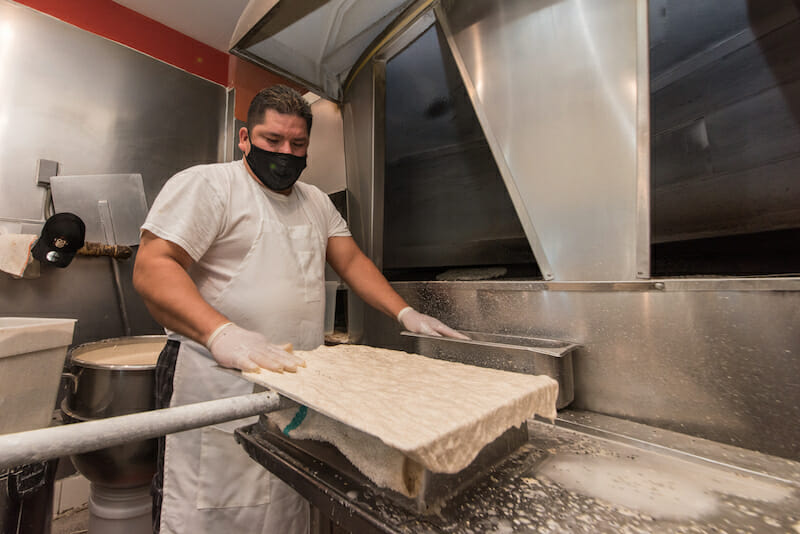 “In L.A., there are so many Persians and so many markets,” explains manager Ali Mohammedi, who oversees Naan Hut for its Iran-dwelling owner, Abolfazl Sadeghizadeh. “So many foods we eat need hot bread. We can find lavosh, barbari and taftoon, but everyone was looking for hot sangak.”

Born in Tehran, Ali was a chef of Persian cuisine who also tandoor-baked Indian naan in London when he moved there in 2007. He left that behind in 2012 after his “wife won the lottery” for a move to the United States. For the last seven years, he has proudly maintained Naan Hut’s standards while diversifying its menu. In that time, he’s seen a few sangak-making copycats spring up in the city.

Naan Hut sells roughly 300 of these warm, fresh breads each day for customers to bring home, typically folded over the crook of their elbows.

“Most Persians eat sangak with the [traditional] foods,” he says. “Like aush, kale pache for breakfast and kebabs. If you want to eat and enjoy this food, you have to buy sangak. It is number one with these foods.” Luckily, Naan Hut also has many of these dishes on offer.

The storefront’s bread is sold fresh out of its unique, Canadian-made rotary sangak oven (the same kind commonly found in Iran). But Naan Hut has expanded its offerings over the years to include the classic Iranian foods people eat with it ­– as well as the not-so-traditional. 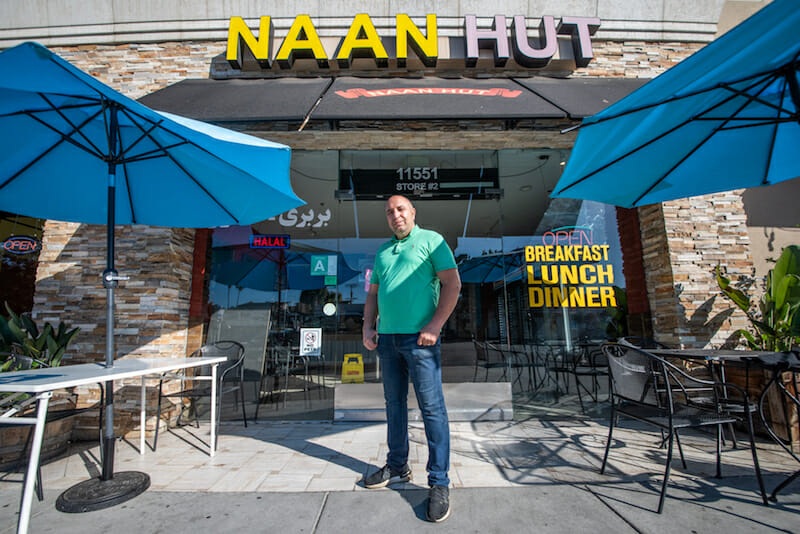 Flavorful meats, including charbroiled chicken, salmon and a killer koobideh (ground lamb or beef kebab), come rolled inside the tender sangak when you order a kebab. There’s even a sangak-crust pizza. The kale pache, a traditional breakfast stew made with sheep’s head and feet, comes with a side of sangak, just as Ali insists it must. Hit the deli case for a container of the time-consuming barley-and-meat porridge known as haleem, or the Persian take on Russia’s favorite Olivier salad.

Additional breads not made in-house include the sweet shirmal and thick barbari flatbreads, making Naan Hut a sort of one-shop-stop for Persian food fans to grab a bite for now or later. 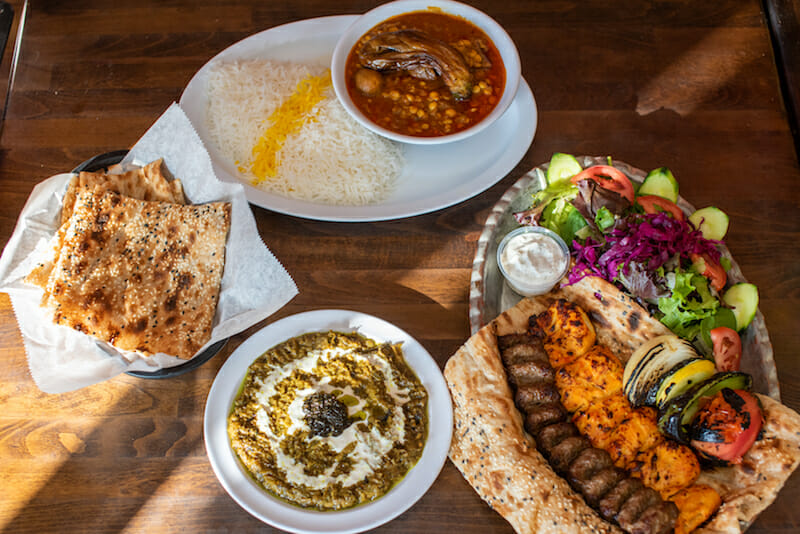 While Iranian restaurants number greatly in this part of town, including excellent options such as Darya, Attari Sandwich Shop and Taste of Tehran, there’s little to prepare one for the mind-blowing sight of watching massive breads emerge from the oven at tiny Naan Hut.

The restaurant not only offers an instructive visual spectacle in the art of baking, it is devoted to replicating this beloved, singular staple of Persian cooking and culture. It’s a service Ali is honored to be providing.

“I love this job,” he says. “Making food, making bread. I’m so happy when I see that the food I make makes people happy. I feel like I’m in Iran. My kids were born here, but they come in, eat traditional foods, traditional breads. I love it.”