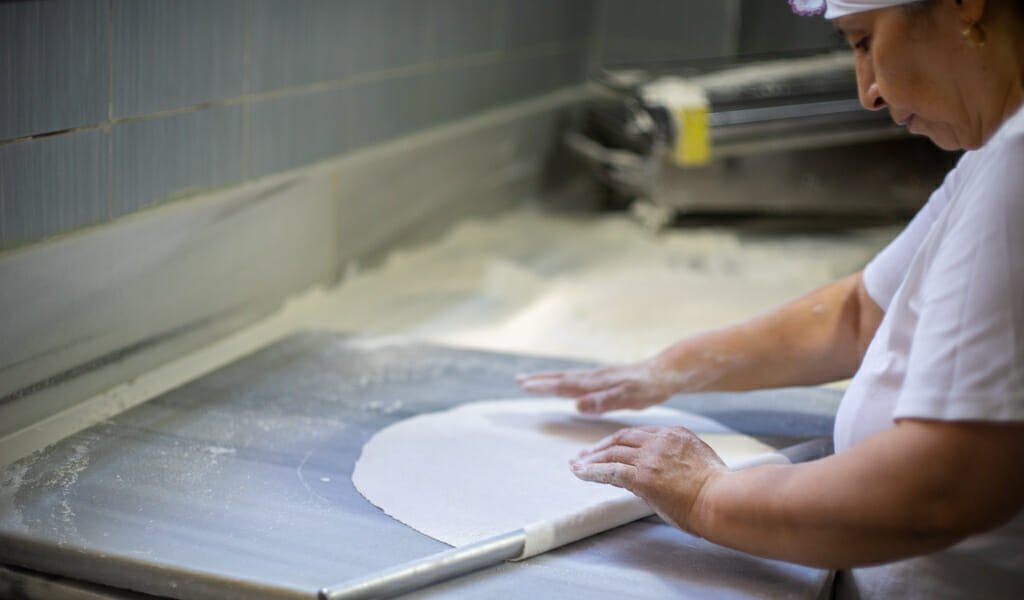 Even with a wealth of international brands and supermarkets, Istanbul neighborhoods are by and large dominated by small shops specializing in certain food products. Greengrocers sell fresh, seasonal produce; fishmongers offer a glimmering array of fish, particularly in the winter months; and bakeries boast a staggering variety of breads and pastries. There are even shops specializing in honey or organ meat. Most neighborhoods, no matter the quarter of Istanbul, also have a local yufkacı, a quintessentially Turkish store specializing in yufka and other unlu mamüller, flour-based products.

Yufka, paper-thin sheets of unleavened dough, have ancient roots within Turkish cuisine. The food is listed (albeit under the slightly different name “yurgha”) in the 11th-century Dīwān Lughāt al-Turk, the first comprehensive dictionary of Turkic languages. Slightly thicker than Greek phyllo dough, yufka is a hyper-portable flatbread, perfect for wrapping around any sort of stuffing for a quick meal.

While some Turkish home cooks roll out yufka themselves, the process can be challenging, which is why many turn to neighborhood yufkacıs like Yadigar Yufka. Located on the corner of Kurtuluş Caddesi and Seymen Sokak, this shop, run by Nihat Cırık and his wife, Yeter Cırık, supplies fresh yufka daily for their customers in the Kurtuluş neighborhood – and beyond. Hailing from Giresun in the Black Sea region of Turkey, the couple opened their shop 20 years ago, and it has since become a neighborhood staple. 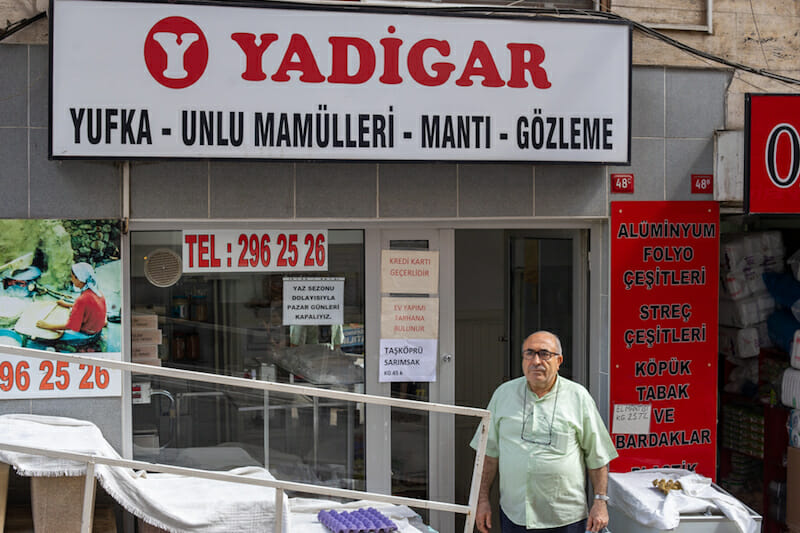 The shop, which lies underneath a bread bakery at a spot where Seymen Sokak slopes down toward the Dolapdere neighborhood, is illuminated by rays of sunlight for much of the day. Noon finds Nihat and Yeter in the small, dimly lit back room preparing the day’s yufka. From a simple dough of salt, water and finely ground wheat flour, Nihat shapes small patties and tosses them in a layer of flour on the marble counter to rest. The dough is briefly flattened by hand and run through a dough roller machine, often by Nihat or an assistant. Then Yeter, wielding a long metal rod known as an oklava, rolls out the dough out on a marble slab to achieve the final degree of thinness.

Once the fragile circles are approximately 60 centimeters in diameter, Yeter deftly flips them onto a large stack sitting on the sac, a traditional convex griddle that is used to partially bake the yufka; by stacking the sheets on top of one another, they lightly steam. Overall, the aim is to make the yufka slightly less doughy and delicate (and thus easier to handle), while still keeping the sheets soft and pliable. “She’s the real usta [master],” Nihat confides in us. For such an essential ingredient, it takes backbreaking work and immense skill to turn out the stack of yufka that the couple sells each day.

For such an essential ingredient, it takes backbreaking work and immense skill to turn out the stack of yufka that the couple sells each day.

When customers begin rolling in later in the afternoon, Nihat characteristically greets each as canım, a common Turkish term of endearment. He whips back the immaculate white cloth covering the stack of fresh yufka and folds the requested number of delicate, billowy rounds into a small package. How he manages to do so without tearing the yufka, which is as soft and thin as delicate fabric, is beyond us.

We visit the shop one evening, after the hard work of making the yufka has ended, to pick up a few sheets and chat with Nihat and Yeter. He attests to the ingredient’s uniqueness: “You can only find yufka in Turkey. I send our yufka all over the world – the UK, Holland, Russia, because you can’t find it there,” he adds. We have no way to confirm this, but that the couple makes world-class yufka is beyond debate. 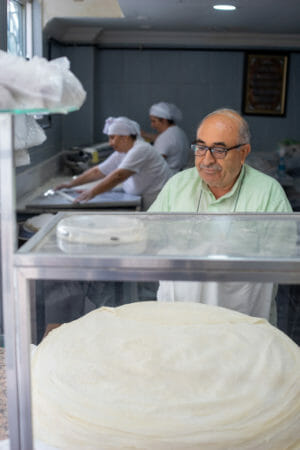 When we broach the subject of the coronavirus and the recently ended lockdown measures, Nihat doubles down on the popularity of their products. “Our business actually went up during the lockdowns. People were staying at home, and what did they want to cook? Sigara böreği, gözleme, ev böreği. And so they came to us,” he says. Apart from fresh yufka, the couple sells brand-name dried yufka, farm fresh eggs, erişte (a type of noodle), fresh lor peyniri for börek, and frozen mantı alongside dry goods like chickpeas and bulgur. This evening we pick up a few hundred grams of the tangy lor cheese to cook with our precious sheets of yufka, safely bundled for us by Nihat.

The modern story of yufka is inextricably linked to börek, the savory pastry found in a multitude of shapes all around Turkey. Layered and baked, it makes a homey pie of cheese and herb filling. Rolled and fried, it becomes shatteringly crisp sigara böreği. But this handy pastry is not limited to börek – it can be used in a pinch to fashion mantı, gözleme or perde pilav, and it is a central ingredient in lesser known regional dishes like siron (a distant relative of mantı) and islama (rolled up sheets of yufka that are sliced, moistened with broth and butter, and then topped with shredded chicken or turkey, and crushed walnuts), two traditional specialties from the Black Sea region.

Once back home, we decide to take Nihat’s advice and attempt sigara böreği. First, we crumble the lor with a handful of freshly chopped parsley for the stuffing. We spread out the tightly packaged yufka on the kitchen countertop, invariably tearing them in a couple places as we do so. Next, with a sharp knife, we cut the yufka from the center of the circle into a series of thin triangles. Onto the bottom end of each triangle goes a spoonful of the cheese and, folding in the edges, we roll the triangles up into tight packages more akin to cigars than cigarettes. A dab of water at the point of the triangle helps to seal the package. Each mini börek goes into a bath of hot sunflower oil until golden brown all over. We leave them to cool on a layer of paper towels, but find ourselves unable to resist. The small pile we fried are gone in minutes, nothing but a satiated stomach and a smile on our face as we give thanks to the handiwork of Nihat and Yeter and the miraculous invention that is yufka. 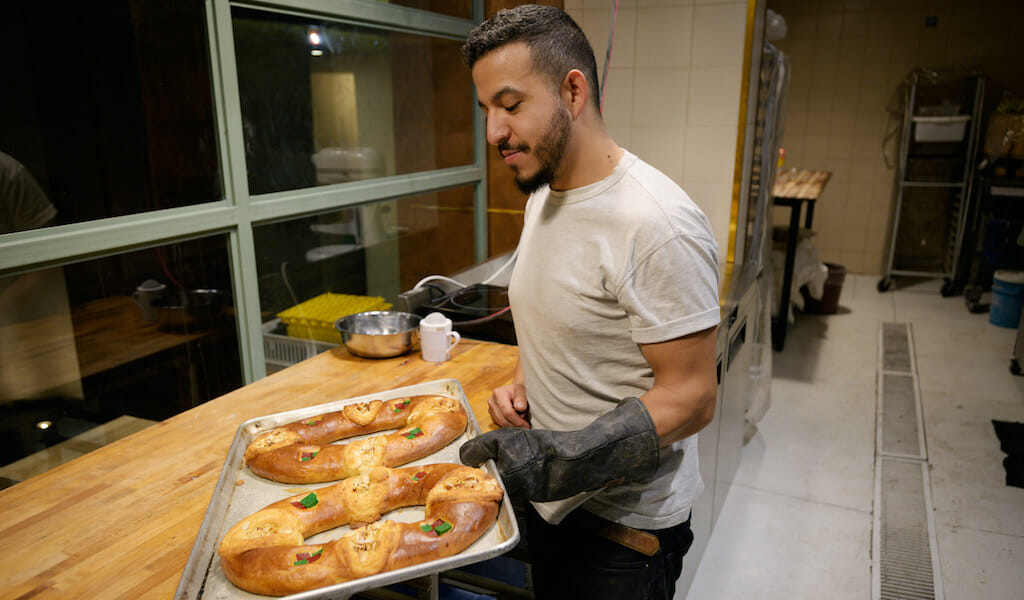 Mexico City | By Lydia Carey
By Lydia Carey
Mexico City“You can’t call yourself Mexican if you don’t eat rosca de reyes,” jokes Rafa Rivera, head baker and owner of Forte Bread and Coffee in Mexico City. Distracted, he stops grating orange peel long enough to muse about the king’s cake he is making. Only 29, he already has several businesses under his belt, and… 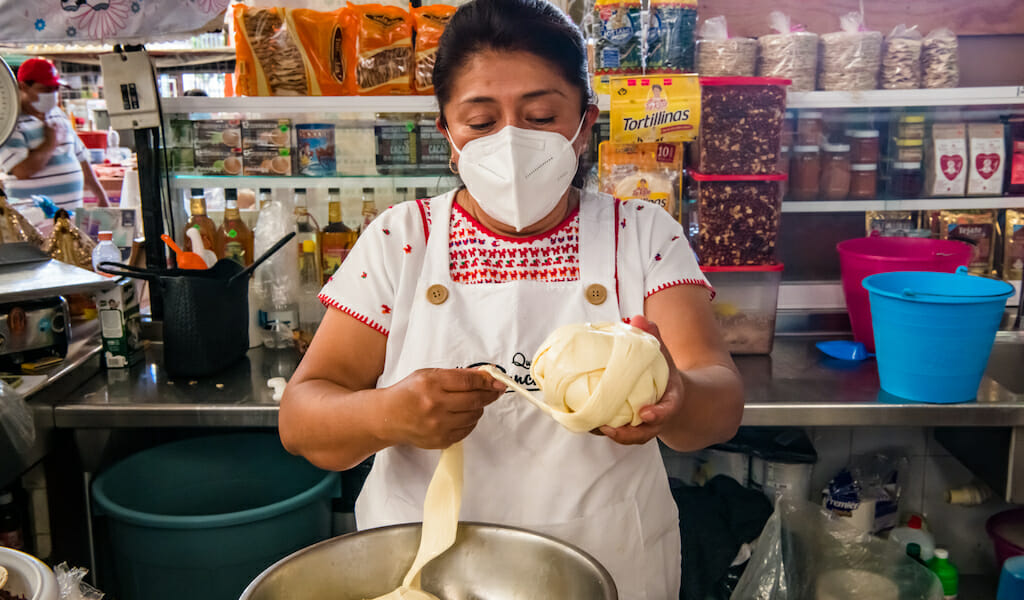 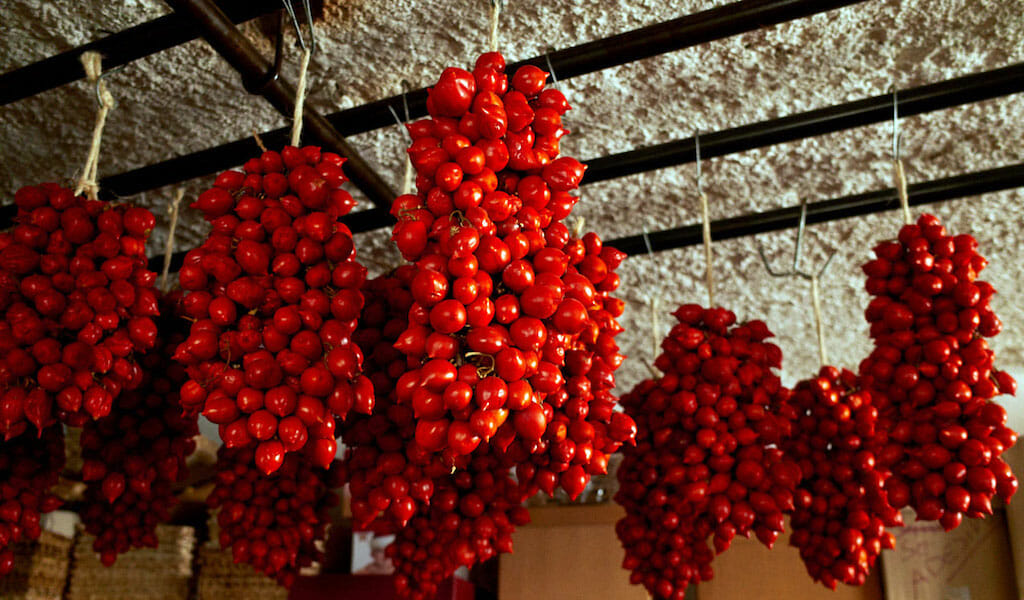