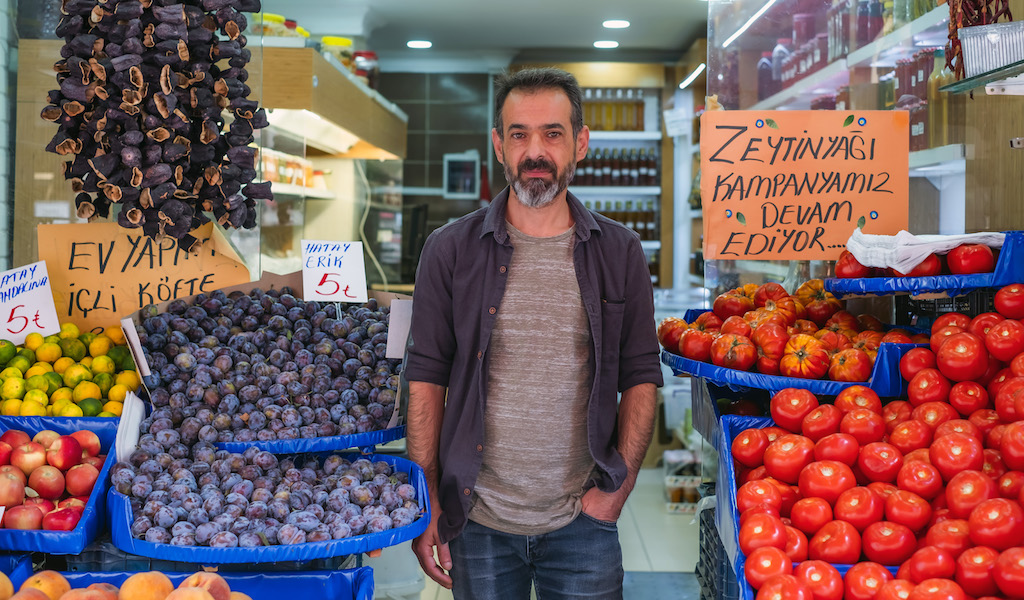 Walking through the Uzun Carşı (Long Market) in Antakya, the capital of southern Turkey’s Hatay region, is a veritable feast for the senses. Among shoe shops, cobblers and barbers, künefe makers drizzle batter on a hot spinning surface to make the threadlike dough for the cheese-filled dessert, grocers watch over mountains of fragrant spices, and bakers slide tepsi kebabı, the region’s most famous meat dish, into roaring wood-fired ovens alongside a myriad of savory flat breads.

The city, its most famous market, and the ingredients found there sit at the center of Hatay’s culinary culture, which has been shaped by a variety of influences over the years (the province borders Syria and the Mediterranean), making it distinct among Turkish regional cuisines. In Istanbul, however, these ingredients can be difficult to come by – unless, that is, you know Abdullah Kuşak.

We stumbled across Hatay Yöresel Ürünler, Abdullah’s corner store in the Kurtuluş neighborhood, after our visit to Hatay – since returning to Istanbul, the region’s distinct flavors had been haunting us. In lieu of trekking back to the Uzun Carşı, we decided to look a little closer to home, scouring the shops and outdoor bazaars of Istanbul in hopes of finding some fiery green Samandağ peppers, which accompany nearly every meal in Hatay, or a cone of sürk peyniri, a traditional cheese whose bright orange color comes from the addition of red pepper paste. Imagine our surprise when we found Abdullah’s shop, packed to the brim with organic, high-quality, homegrown and handmade Hatay food products, tucked into a little storefront on one of Kurtuluş’s busiest streets. 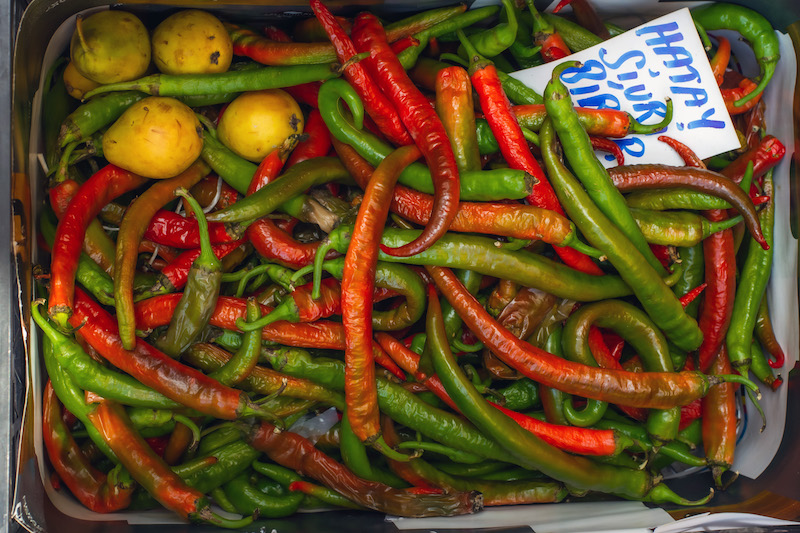 As we wandered in from the blistering heat of a summer afternoon in Istanbul, Abdullah greeted us with a smile and a handshake. He has been running this tiny shop with his wife and son for the past year, along with another store in Bakırköy that he opened when he first moved to the city five years ago. Before coming to Istanbul he ran a similar operation in Samandağ, his hometown in the Hatay region, for 20 years. When business lagged in Hatay, he moved his family to Istanbul, where a larger clientele and better business awaited. “To tell the truth, there’s not much need for stores like ours in Hatay,” he admits with a rueful smile. “There, everyone makes these things themselves.”

His surname, he tells us, refers to the traditional cummerbund into which Ottoman farmers used to tuck their knives and other implements so as to keep their hands free while working. It’s a fitting name, given his family’s history – his father ran a farm store before him, and his grandfather before him, and Abdullah still remains very much connected to the land. “We don’t eat factory-made foods,” he tells us. “It’s not in our culture. If we need tomatoes, someone goes out and picks them from the field, and if we need biber salçası [a sweet pepper paste that lends a sunny richness – and sometimes considerable heat – to many southern Turkish dishes], we gather the family together, and we cut and clean and process the peppers, and then set them out to dry.” It’s still common to see racks of unbelievably red tomatoes and peppers drying in the yards and on the balconies of houses in the Hatay countryside.

“Almost every religion has passed through Hatay, which means we are a very tolerant people,” Abdullah asserts. On top of that, some thirteen-odd civilizations have ruled the region at some point. “This means that we take a bit of different tastes from everywhere and mix them all together with amazing regional products,” he adds. As far back as Phoenician times, Antakya, the biblical Antioch and Hatay’s largest urban area, was an embarkation point for the region’s celebrated wines, olives and olive oil. 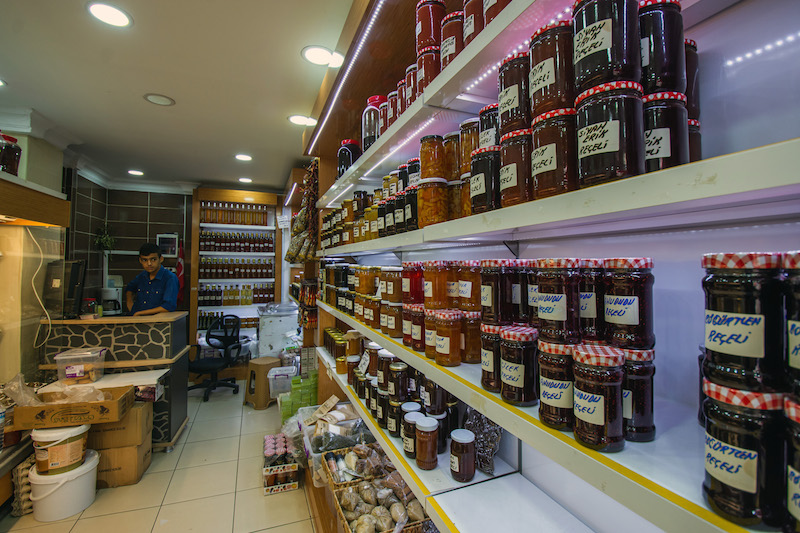 This reputation for excellent food has persisted. Designated a UNESCO Creative City in 2017, Antakya has begun to receive attention alongside its better-known neighbor, Gaziantep, for its distinct ingredients and traditional dishes. The region’s biodiversity accounts for a huge range of wild herbs and spices, the culinary and medicinal use of which generates around 60 percent of the region’s GDP.

The bottom-most shelves at Hatay Yöresel Ürünler are a testament to this tradition: they are filled with fragrant spices, many of which cannot be found in most of the city’s better-supplied spice shops. The region’s abundance is also displayed in the packed refrigerator. On the day of our most recent visit, there are jars of pickled zahter, a kind of wild thyme that is used in a popular salad when freshly picked or made into a spice mix of the same name when dried; at least six different kinds of handmade cheeses, including the piquant sürk peyniri; a specific type of butter for künefe; and the ubiquitous kabak tatlısı, a dessert made in Hatay from enormous white pumpkins.

Abdullah’s shop [is] packed to the brim with organic, high-quality, homegrown and handmade Hatay food products.

Each week the store’s contents change slightly, sometimes including fresh herbs in the summer and pickles in the winter, and even the occasional içli köfte, packaged and ready to be boiled or fried. On other shelves the wandering eye always finds something new to gaze at, from the funky small green jewels that are Hatay olives to village roasted coffee, smoky düt pekmezi (mulberry molasses) and jams ranging in ingredients from the familiar (sour cherry) to the downright bizarre (olives and mastic gum). Abdullah assures us they are all delicious.

Abdullah sources products from all over the Hatay region, having built a vast network of trusted producers in places like Iskenderun, Samandağ, Reyhanlı and more. In this corner of Istanbul, he has built a loyal following, and while many of his customers are from Hatay, many more are not originally from the region but have fallen in love with one of the ingredients he sells, and keep coming back for it. “If there is something missing from my shop, I reach out to my family and friends to see where I can get it, and have it brought to Istanbul as fresh as possible,” Abdullah tells us. Every couple of days he picks up shipments brought by bus to the Esenler station to refresh the stock in his store. 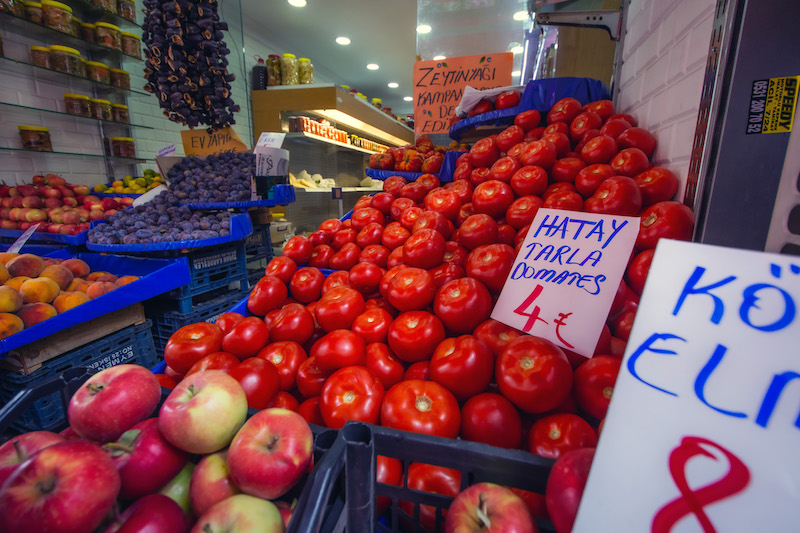 On a recent morning, the refrigerator at Hatay Yöresel Ürünler is packed full of a newly arrived shipment of bright green cucumbers, cold and crisp in the summer sun. While neighboring greengrocers stock shriveled eggplants in the dead of winter, all of the produce at Abdullah’s shop arrives strictly by season. Produce crates spilling onto the sidewalk overflow with farm fresh delicacies, from photogenic ruby red tomatoes in the summer to tiny apricots in the spring, pale yellow with blushes of pink, and, in winter, plump lemons, the sweetest we’ve ever tasted. The tiny “village” apples we picked up a few weeks ago, juicy, refreshing and balancing sour and sweet with a hint of bitterness, are nowhere to be found, their peak freshness already come and gone.

“Nowadays people harvest fruit, treat it with chemicals and store it in warehouses until they can sell it, out of season. But the flavor is sacrificed. We sell everything fresh as it comes, so that we don’t lose that flavor,” Abdullah explains. And this shows – everything we bought at his shop, from the gloriously fresh produce to the handmade cheeses, virtually exploded with the tastes of Hatay. 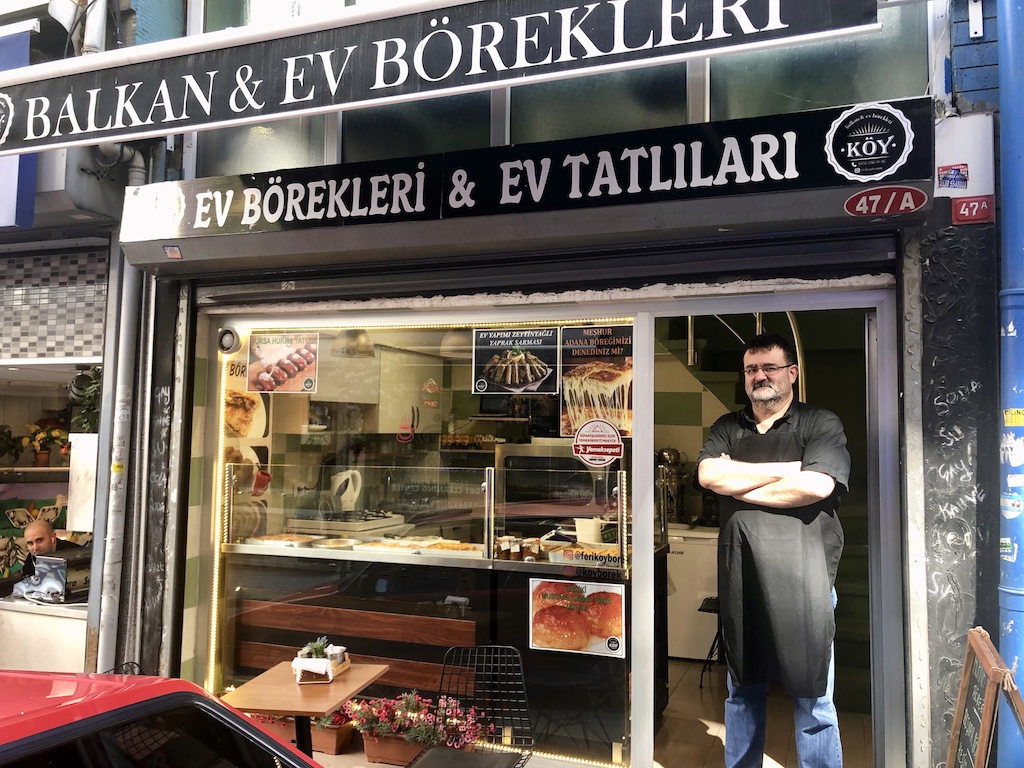 Istanbul | By Paul Benjamin Osterlund
By Paul Benjamin Osterlund
IstanbulBaruthane Avenue perpendicularly ascends from the beginning of Dolapdere Avenue, a mysterious valley of shady night clubs, hotels and auto repair shops. It passes through our dear neighborhood of Kurtuluş, at one point intersecting with its main street and continuing on in a more commercial character. The first few blocks of Baruthane are lined… 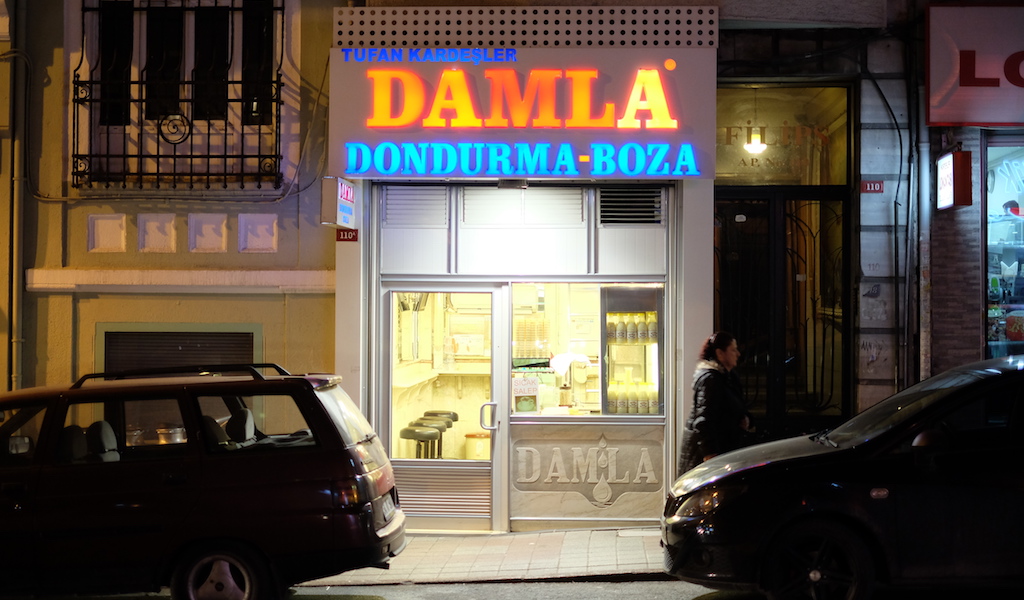 Istanbul | By Paul Benjamin Osterlund
By Paul Benjamin Osterlund
Istanbul We’re not quite sure what we like about boza, a drink made from slightly fermented millet that is popular in Istanbul during the wintertime. The thick beverage tastes like a combination of applesauce and beer-flavored baby food, though we warmly recall the strength it gave us one blustery December day. On that relentlessly… 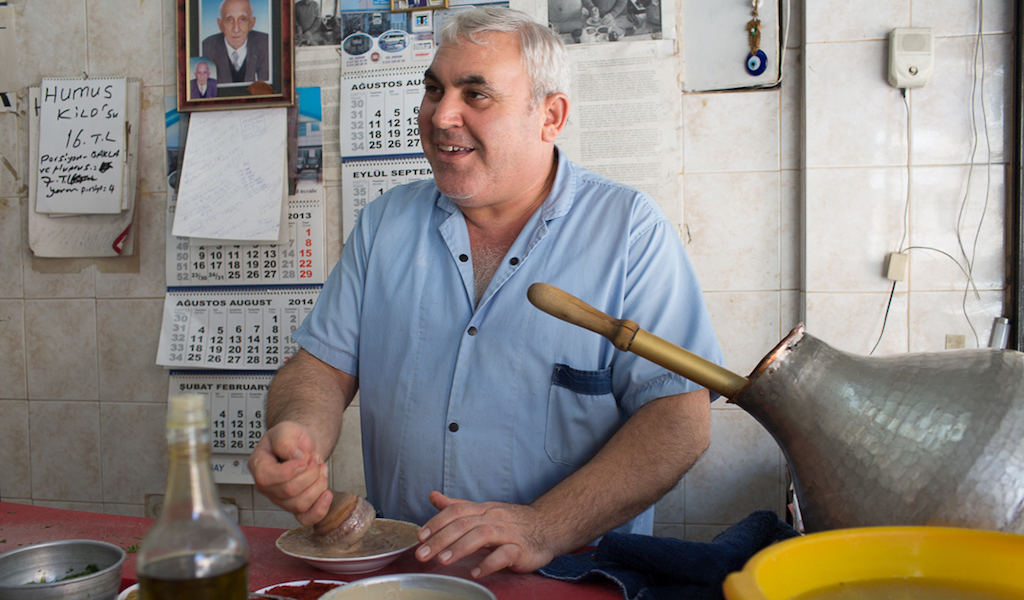 Istanbul | By Culinary Backstreets
By Culinary Backstreets
Istanbul In the years of research for their new cookbook, Istanbul & Beyond, author Robyn Eckhardt and photographer David Hagerman became well acquainted with Anatolia and the distinct cultural identities, landscapes and, of course, cuisines that can be found on this vast plateau. So we are pleased to be working with Robyn and Dave…