Istanbul’s Aksaray district is a difficult place to get to know. It’s probably the most diverse district in all of Turkey and with a very high turnover rate. Those Georgian ladies you saw dragging an overstuffed plaid duffel down Buyuk Langa Caddesi yesterday? They might be halfway to Batumi by now. The Syrian family by the bus stop? They may be on their way to meet a man in Izmir about a boat. Who knows?

Aksaray’s unknowableness makes some locals uneasy; there’s got to be mischief in all that motion, with all of those foreigners. Such is the stigma of Aksaray, den of thieves. But after spending some time in the area, we’ve found that if Aksaray is a den of anything, it is one of fresh starts – a landing pad for those arriving from some tough circumstances around the world and the launching point to better ones.

The Syrian community, staking its claim over on Millet Caddesi, is the most visible these days, but Aksaray has been circled in red on maps written in Amharic, Uzbek, Yoruba, Urdu and Arabic for more than a decade. And while many may be on their way elsewhere, there are some like Tahsin bey, the proprietor of Can Ocakbaşı, a basement grillhouse, who has set down roots here and found a safe spot to reflect on his hometown of Midyat, an ancient city in southeast Turkey’s Mesopotamian plain that has long been home to a sizable population of Syriacs, an ancient Christian sect. 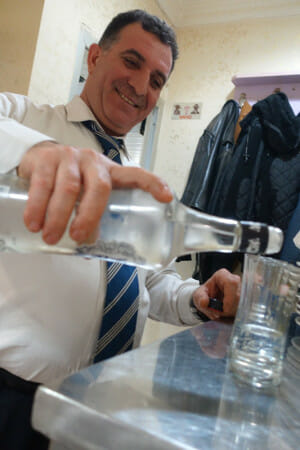 On one recent visit, Tahsin bey stood beside the wine rack at the front door of his modest grill joint across the street from the Emniyet bus station in Aksaray. He wore a pinstriped suit of shiny black material and shoes freshly shined, as many Istanbul businessmen do. But his face – permanently sun-kissed cheeks, shy smile, prominent moustache and black eyes – betrayed origins elsewhere. He hoisted a large plastic jar from the wine rack. It was filled with skinny, pale gherkins and in a Kurdish brogue, he said, “Everything here is from Midyat!”

Indeed, alongside the pickles were several bottles of wine labeled in the Arabic-looking script used by the Christian minority who still live in the Midyat area and speak a language that is probably the closest living link to the language of Jesus Christ.

“Midyat is Mesopotamia, an ancient civilization, like Istanbul. Arabs, Kurds, Suryani, Yezidi – everyone lived there together.” Tahsin bey said.

While Syriac communities have sprung up from Detroit to Stockholm, in Istanbul it is Midyat’s Kurdish diaspora – of which Tahsin bey is a member – which has the strongest presence. Can Ocakbaşı, though, serves as a sort of gathering point for all those who left Midyat and are in need of a reminder of their hometown.

Tahsin bey’s story is like many in Aksaray. He first fled conflict in 1977, when a deadly feud between two clans engulfed his village in battle. Tahsin and many relatives headed for safety in the nearest town, Midyat, the region’s capital. There, he entered the workforce at the age of 11, washing dishes and learning the kebab trade, top to bottom. Then in the early 1990s conflict between Kurdish separatists and the Turkish government starting getting bad in Midyat. One day, then three days in a row, the shop where he worked remained shuttered as street battles happened around him. “We escaped from war,” he said.

He packed up and moved to the city of Batman, which was no more secure than Midyat. “That was 1993. Seven or eight killings everyday? I don’t know. Military checkpoints, all of the time. You could not play a Kurdish [language] music cassette in the car. It’s true,” Tahsin bey said.

Married at this point and the father of small children, he followed the advice of his brothers, rented a van, packed everything into it and drove to Istanbul, 950 miles away. Batman and Midyat might seem worlds away from the Istanbul, sharing more in common with dusty places over the border in Iraq or Syria, but Istanbul – and Aksaray specifically – had been a magnet of migration from Eastern Anatolia for a while. Networks were already in place. Tahsin had three brothers living and working in Istanbul, which was more than he had anywhere else and was enough for him to set up. 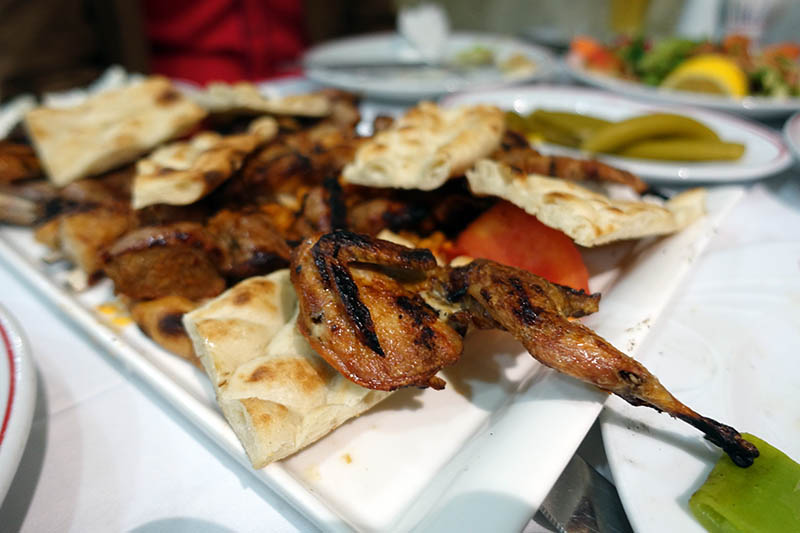 After a brief stint in the leather business with his brothers, Tahsin found his way back into the kebab trade he knew so well, as a partner at Can Ocakbaşı. The partnership soured and he got full control of the business in 1998. According to Tahsin bey, once he gained control of this place things in his life started to shape up. He finally had a place that was his.

On a busy night, we descended a short flight of stairs into the dining room. A hulking grill the size of a grand piano occupied the left side of the room. The virtuoso, Şerif usta – also a Midyat native – deftly rotated dozens of skewers while also managing a stack of thin flatbread. He poked a skewer in the ash when flames leaped up at the meat, a move that earned our appreciation.

Across from the grill were a dozen or so tables mostly filled with groups of men and women enjoying a night out. We heard snatches of Kurdish and some Turkish spoken with a foreign accent, but mostly the crowd looked and felt like a good neighborhood ocakbaşı, which is exactly what Can Ocakbaşı is.

“At night, it’s regulars mainly. Shopkeepers in the area, friends from Midyat,” Tahsin bey told us. But to the standard ocakbaşı template Tahsin bey has added a bit of eccentricity that makes the experience much more fun. What some ocakbaşı try to accomplish with hundreds of framed photos of half-drunk smiling customers, Tahsin bey manages with one sweep of the room. He works the room every night, filling empty rakı glasses, chatting with diners, draping an arm around a chair – escaping his embrace is not possible. He also designed the menu. Along with the standard ground lamb kebabs are several cuts of lamb, bone in.

We sat near the back with a good view of the grill, and plates began to crowd our table. Plates filled with a crunchy cabbage salad drizzled with sweet pomegranate molasses, radishes and the famous pickles we’d seen out front. We ordered a bottle of the Suryani red and enjoyed a beer with the refreshing snacks laid out on before us while the wine breathed. Those pickles, tart and snappy, could even make Efes – Turkey’s ubiquitous mass-market beer – taste good. 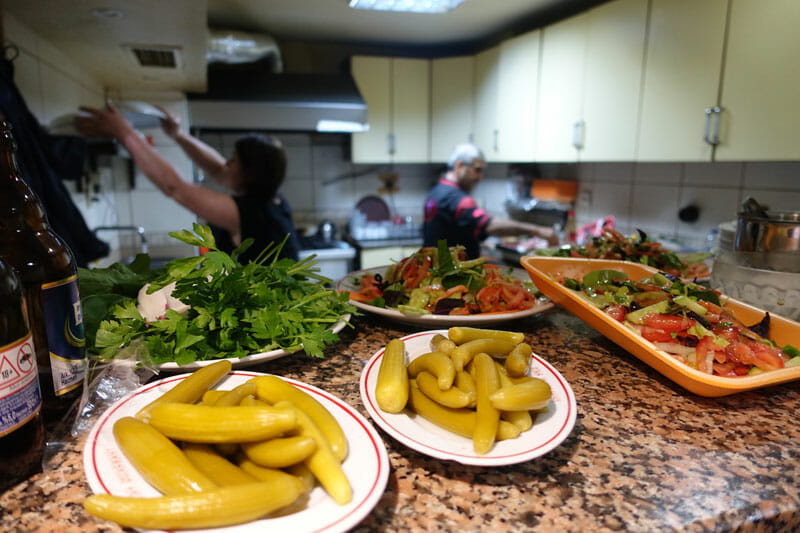 Soon grilled vegetables and mashed eggplant salad showed up, which was our cue to order the meat. Back at the cooler by the kitchen the day’s offerings were lined up, ready to send to the grill. There were those lamb kebab mainstays – Adana, Urfa, liver, lambchops – and an unusual amount of fowl. Along with chicken wings and marinated cubes of chicken were chunks of turkey and even small whole quail. We placed our order and returned to the table to share the good news.

The lamb chops were fine if a bit fatty for our preferences, but the lamb kidneys were char-sealed orbs of tender organ meat, smoky and delicious. The lamb ribs were moist and tender with the clean taste that good lamb gives. The quail were more than a novelty. Split down the spine and “racked” on the skewer, the skin was expectedly a crackling jacket over tiny lobes of meat hugging bones. Those matchstick bones, in certain instances, were charred enough to act as a crunchy condiment along with the meat. Can Ocakbaşı is the kind of place that ends with a fruit plate, on the house, whether you like it or not.

A proud outpost of the Midyat diaspora, a place to disappear for drinks and grilled meat in Aksaray, Can Ocakbaşı represents so much of what we love the most about Istanbul: a polyglot institution of inclusivity, Anatolian warmth, great pickles and grilled meat, where even the altar wine is drinkable. These are key ideals to society, we think. Tragic stories that begin like Tahsin bey’s deserve a happy ending, and where else to find one but in Aksaray?