Until recently, Istanbul had been hosting increasingly more foreigners, who found themselves easily enchanted by the city and its spectacular location between three waterways. It had also gained well-deserved and long-due recognition for its vibrant food scene, which represents every corner of Turkey. Entire streets are devoted to the culinary specialties of one province, and these pockets are among what we find the most appealing about eating here. Tourists made the same discoveries, and places that were once patronized only by local tradesmen found an international audience.

But this past year sent everything reeling in reverse. While we were admittedly overwhelmed by how inundated with tourists certain parts of the city had become, we would prefer that to what followed: 2016’s bomb attacks and attempted military coup sent the crowds packing and devastated entire districts that had just opened scores of hotels and restaurants in the expectation that the number of visitors would continue soaring. The hotels sat empty, and popular, acclaimed restaurants threw in the towel.

Despite the heartache and wound after wound their city sustained, Istanbullites kept at it, refusing to let their spirits break, as difficult as it was to do so. Our picks for top eating experiences of the year showcase local favorites that cater to those who have remained resilient in spite of it all.

One of our most exciting discoveries this year was Yılmaz Tandır Evi in Istanbul’s Feriköy neighborhood, where many people from the eastern Anatolian province of Erzincan have settled over the years. Yılmaz İngeç, a native of Erzincan’s İliç district, serves only the finest ingredients from his hometown, including fresh honey, kavurma and tulum peynir, a salty, crumbly cheese aged in goatskin. A simple serving of fried eggs topped with tulum was a match made in heaven, perhaps our favorite breakfast this year. 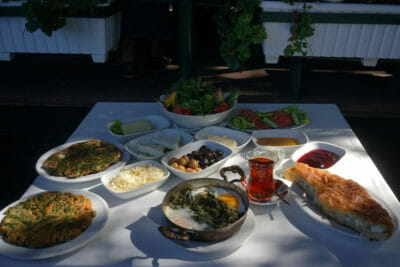 We were thrilled to stumble upon a secluded slice of the Black Sea province of Trabzon right here on the Asian side of Istanbul earlier this fall. The Trabzon Cultural Association attempts to emulate the setting of the lush province and is eloquently draped in a thick cloack of trees and greenery. It is both a hangout spot for Trabzon transplants as well as a full-service restaurant serving spot-on versions of the Black Sea’s unique cuisine. The fondue-esque kuymak topped our list of favorites, but you’ll want to come as a group and order from their deep, decadent menu. 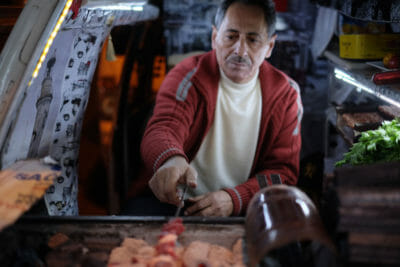 A tiny white van grilling kebab in the dead center of the often chaotic Kurtuluş Son Durak intersection caught our eye initially due to its puny nature. The dürüm prepared by Yıldırım usta and Süleyman usta, however, is anything but unassuming. Adana (spicy lamb and tail fat) and çöp şiş (grilled skewers of beef and fat morsels) are the only items on the menu, and both are top specimens. Ask for bol acılı (very spicy) and Yıldırım usta will toss a fiery whole red pepper on top of your Adana, while the excellent çöp şiş is sliced and skewered to order. Both are wrapped in the freshest tırnaklı ekmek purchased daily from a nearby bakery. 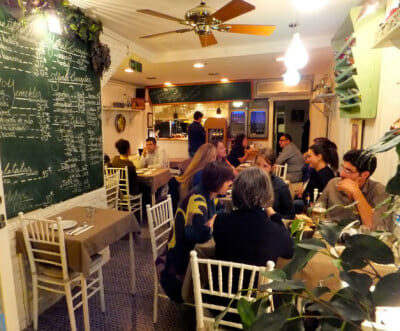 Şiraz is a small, charming meyhane in Kadıköy that initially featured Persian-influened cooking whipped up by chef Elahe, who came to Turkey with her family as a child. The menu seems to have morphed into that of a full-on Ege-style meyhane, which is now curated by chef Tuğçe Kıltaç.  In any case, the cold meze and hot appetizers alike were all fantastic, but what really knocked our socks off was dessert. Encased in a small jar was a magical creamy substance, with a consistency somewhere between cheesecake and frozen yogurt, encrusted with granola. We couldn’t stop raving about it, and chef Tuğçe gave us one to take home, which we proceeded to savor slowly but surely over the course of the next week.

In a time of heightened uncertainty, Tuğçe’s gesture reminded us that at the heart of Istanbul’s culinary scene lies a deep sense of generosity that’s here to stay. Here’s to a 2017 of new discoveries that we are already excited to share.