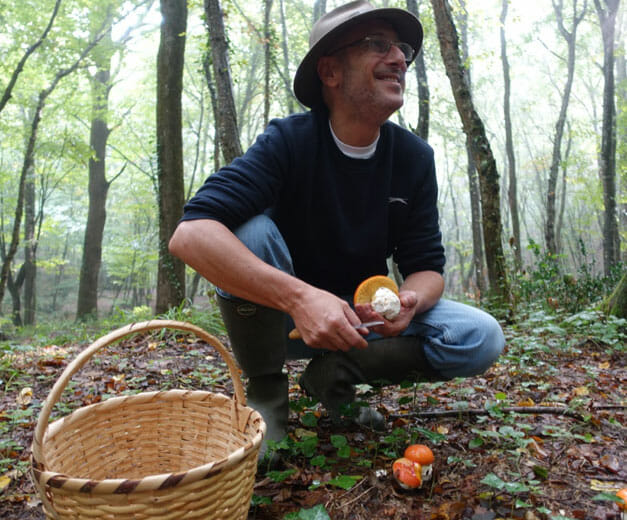 “This would be front-page news in France!” Jilber raved, darting off between tall chestnut trees and oaks, obscured by a hazy steam that seemed to hang in the forest like a gauzy Halloween decoration. He looked over each shoulder and all around him where it seemed he was surrounded by golf balls, shanked off and forgotten in the rough. Called ovoli to admirers in Italy, Amanita caesarea to the bookish, and yumurta, or egg, in Turkish, these were Caesar’s mushrooms, named for their popularity with the Roman emperors. Gathered together in the damp, brown leaves were a couple of long-stemmed, large-capped mushrooms as big as dinner plates, their tops beginning to flatten. Beside were smaller bulbous ones of the same family that evoked clown noses, while among the brush were caps just beginning to emerge from their white “shell.” Our expedition of four, led by Jilber Barutçiyan, Turkey’s leading wild mushroom expert, froze and took in the marvel of this forager’s treasure trove.

“Last year, if I found just one Caesar, I’d do a belly dance!” said Jilber.

“Muhteşem,” said Mehmet, the photographer of this expedition, in a slow drawl. Marvelous. “I’ll take a video.”

“Magnifique,” said Jean Renee, one of our companions, pointing out more “eggs” with his umbrella.

And then, Jilber (pronounced “Jeel-bear”), unable to contain himself, raised his arms and did a little Anatolian shimmy, hopping in green rubber boots among the mushrooms. After Mehmet had filmed each mushroom, the giddy group of men flipped open their knives and began plucking them from the ground, snuggling them into their baskets. 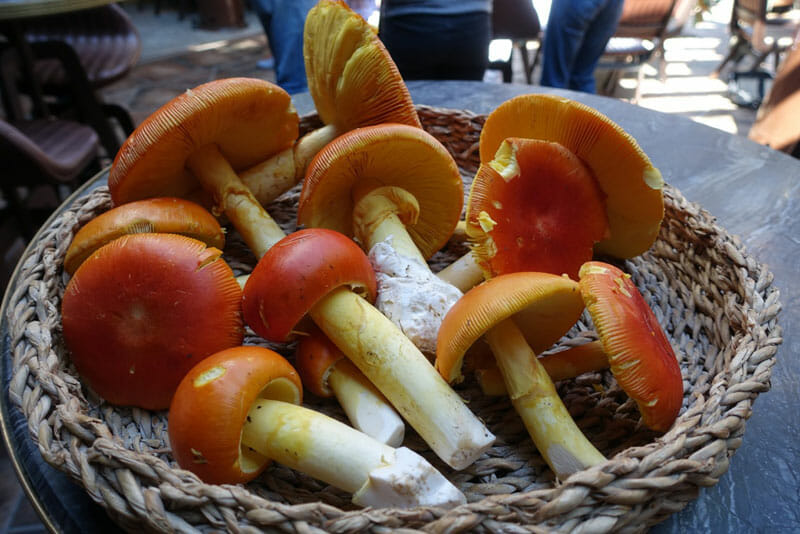 It was cause for celebration. Even for those unappreciative of most fungal nuances, these Caesars – found in Istanbul’s Belgrade Forest, an oasis of green on the city’s northern edge crisscrossed by Ottoman-era dams and aqueducts – were something to behold. A bold orange cap concealing delicate gills and a trunk that looked to be bathed in saffron: Unlike the fragile chanterelles we’d found down the path or the clunky spongy porcini in our baskets, the Caesar struck a, well, imperial pose. Eating them raw, fresh from the ground, we thought we identified the nutty taste that Jilber detailed in his entry on this specimen in his book Türkiye’nin Mantarları (The Mushrooms of Turkey), published, sadly, only in Turkish. But perhaps more than the properties of the mushroom itself, the sensation of finding such a forager’s trophy in such abundance was euphoric.

Whereas in Switzerland, the sight of such a stash might set off a bidding war, or in Russia a fistfight, onlookers in one nearby village were roundly skeptical about our mushrooms. One hairnetted kitchen worker on a smoke break related that his grandfather fell gravely ill from eating mushrooms. He wouldn’t come near our baskets. An inquisitive woman craned her neck from a distance and waved off the offer of one fine mushroom as a gift. A taxi driver plucked one from our basket and asked us what were those things. Painted Easter eggs? Mushrooms, we explained. Allah Allah, he said, and walked off. All of these people, presumably, live within shouting distance of one of Europe’s finest and least-known mushroom hunting grounds and they kept a wide berth, as if we were handling radioactive material. 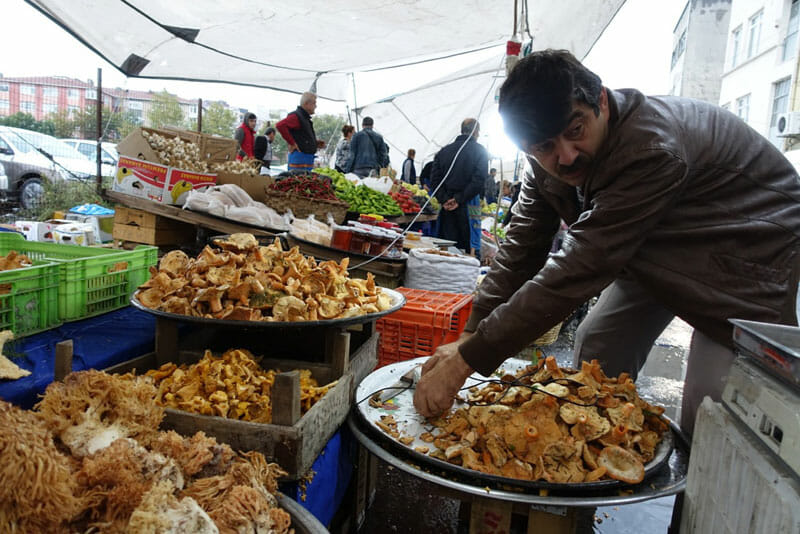 That’s not to say that wild mushrooms aren’t eaten or sold in Istanbul. At the İnebolu Pazarı in the Dolapdere neighborhood, which specializes in goods from the Black Sea region, known as fertile ground for mushrooms, they are the star attraction. But on a recent visit, we found a basket of Caesars that looked like they’d been dragged all the way from Kastamonu in a wet paper bag. They were nearly all limp and broken, totally filthy. “Fifteen lira per kilo if you want to choose, five if you don’t!” barked the vendor. Had these mushrooms been picked and transported carefully to the market in, say, Barcelona, they’d fetch upwards of €80 per kilo.

The general lack of interest in mushrooms means that a supply chain has never developed between the abundant forests just to the north of the city and the throngs of restaurants downtown. Indeed, the only mushrooms that turn up in Istanbul’s traditional restaurants are rather pedestrian button mushrooms, which are not cooked or eaten with much enthusiasm. Kaan Sakarya, chef of Nicole, said he’ll serve a wild mushroom dish only “on Jilber’s word,” meaning he gets a phone call that his friend has stumbled on something interesting in the forest. 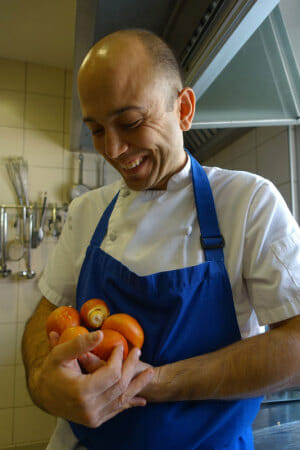 In the kitchen, Kaan showed us a stash of Caesar’s mushrooms Jilber had just dropped off. He melted down plenty of butter and gently sautéed the chopped mushrooms, pointing out the saffron-colored juice released. “It’s almost like egg yolk,” he said, stirring until it set, “or like a menemen!” The dish would be part of the night’s tasting menu, a precious treat on a Wednesday night, not to be swooned over again until Jilber’s next call came in.

With Istanbul’s endless appetite for gourmet pizza and a fine-dining culture refocusing on the fruits of Anatolian soil, the lack of interest in wild mushrooms seems likely to change. Oddly, the man best positioned to profit, Jilber, the king of Istanbul’s Caesars, has no interest in the business. He forages every day and shares his findings with his friends for free.

“Education is my number one goal,” he said.

So Jilber, a former bar owner who learned about mushrooms during a 20-year stay in Switzerland, is basically starting from scratch, trying to put in place a culture of mushroom hunting where it has never really existed. He’s started a club called the Mushroom Friends. He takes groups of schoolchildren out in the forest whenever he is asked. He’ll lecture anyone on the subject who cares to learn something. But he is not so concerned with the fortunes that could be made from his coveted knowledge. He knows more than a little about truffles in these parts but shies away from the subject. “They’d be in here with bulldozers tomorrow,” he said. The edible findings occupy only a small part of Jilber’s interests. 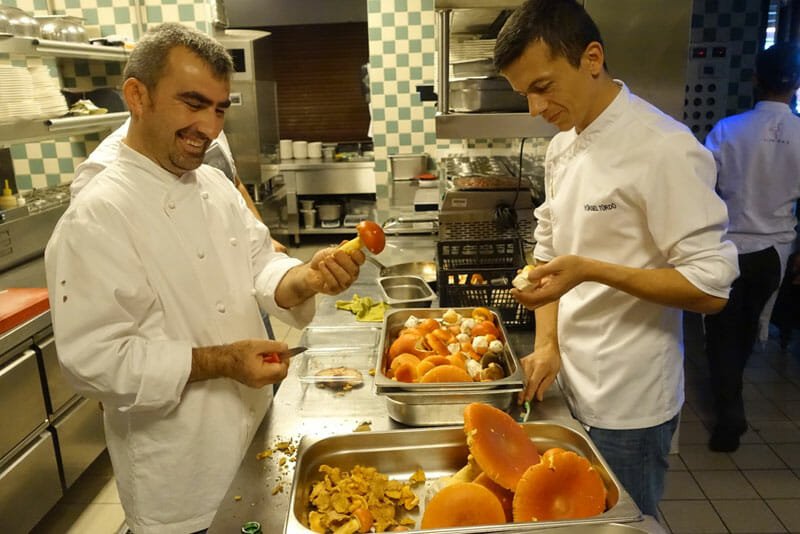 We trailed off the path, passing up dozens of Caesars, finally arriving at the true reason for the day’s hunt. There it was, Hericium coralloides (coral tooth fungus), the biggest and finest example Jilber had ever seen. Covering the end of a rotting log, the white fungus looked like the inside of a freezer with a serious frost problem. Nothing you’d eat, but a big score for Jilber’s research. Mehmet set up his tripod.

“I could spend all day here,” Mehmet said.

Jilber excitedly made a couple of phone calls about the finding and then stomped off into the woods. He knew a spot where we might see a fungus clinging to the side of a tree that looked a lot like a human ear. And off we went. 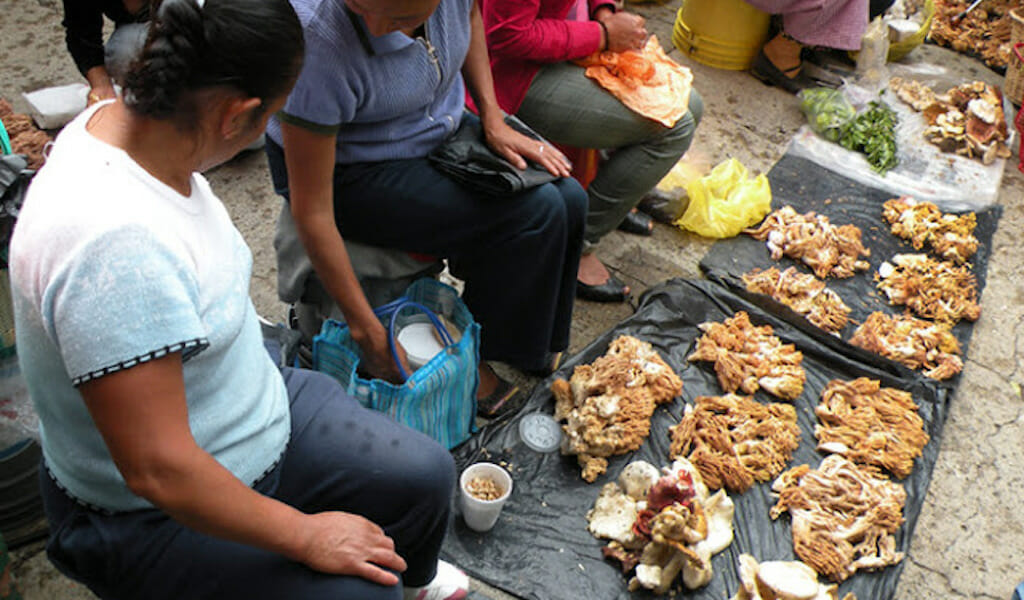 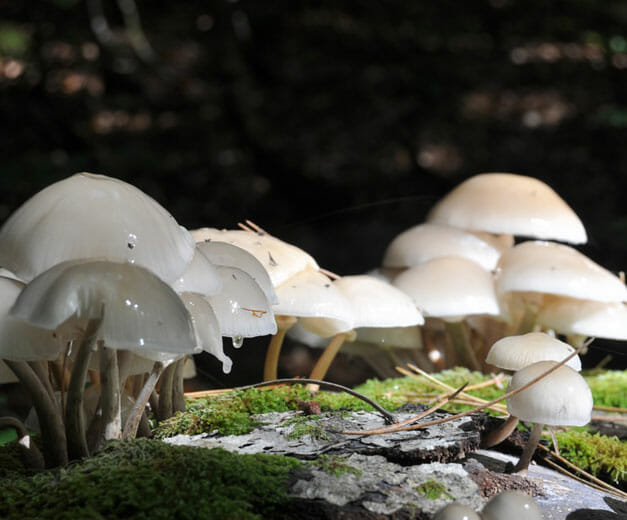