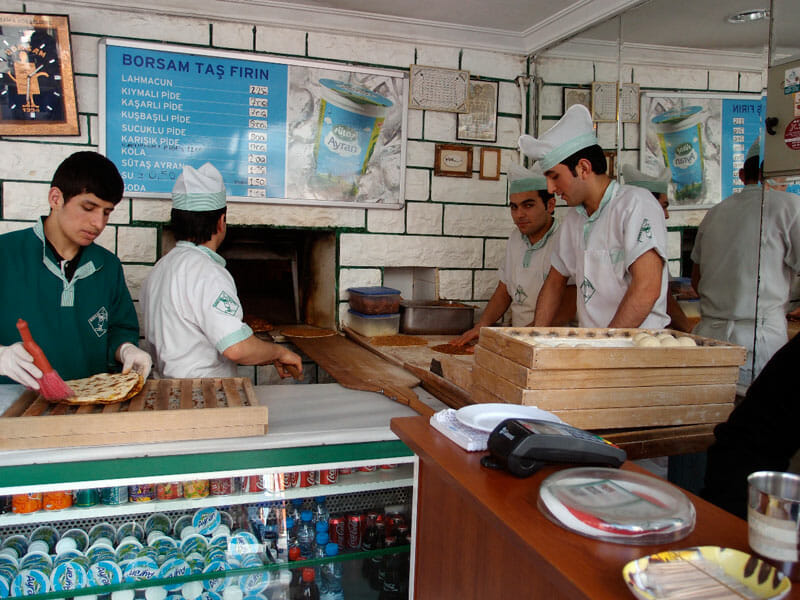 Lahmacun is one of those mysterious foods where a lot is created with so little. It checks all of the boxes of a perfect savory snack: crispy, oven-fired crust, light and spicy meat spread, a fresh green garnish and a tangy spray from a lemon. It’s like an artisanal pizza with a Middle Eastern topping wrapped around a side salad – for the cost of a shoeshine.

How anyone could not love lahmacun is beyond us. Still, we hear they are out there. The only explanation is that they have never had a really good one. For in the hands of a real master, or usta, a paper-thin round of dough topped with a simple mix of ground peppers, meat and spices becomes something magical – almost a living thing. Here we present our top three lahmacun makers in Istanbul.

Borsam Taşfırın
We are usually suspicious of chains, particularly when it comes to something as hand-crafted as lahmacun. But we had enjoyed many a lahmacun at the Kadıköy fish market location of Borsam Taşfırın, an Istanbul mini-chain of lahmacun ovens. When we set out to find the best lahmacun in Istanbul, we were intrigued by a few tips that urged us to head toward another branch of Borsam, just a few streets north of the market. A preference for one branch of the same chain over another must indicate the presence of an outstanding usta, we thought to ourselves.

We arrived to find Borsam Taşfırın in full swing. This is not a place that skimps on production. Along with an oven-tending usta and his two assistants, there was a young man whose sole occupation was to brush off excess flour from the back of the freshly baked lahmacun with a tiny broom before passing it on to be served. The team worked in a quick rhythm and we had our lahmacun in hand within a minute or two of ordering.

Borsam’s lahmacun, with its lovely contrasts of oven-darkened crust and deep red flecked topping, looked ready for a cover shoot for Bon Appétit. But we recognized the difference before even tasting this one, thanks to Borsam’s brush boy, who rolled up our lahmacun into a baton with some parsley inside, forcing us to tear it apart to share. Borsam’s lahmacun first snapped a bit and then gave way to a soft, stretchy second layer of crust hidden between the bubbly topping and the matzo-like crispy bottom crust. Imagine a crust just a couple of millimeters thick with three completely different personalities, all formed in just a few minutes in a raging oven. This is the lahmacun usta’s magic touch. With a crust this complex, the topping, a peppery, musty spread that reminded us that this is not a vegetarian treat, was almost beside the point. Due to the work of the nameless doughboy who, by luck or instinct, created a lasting memory, Borsam won our vote for the top lahmacun maker in Istanbul.

Halil Lahmacun
There are scores of freshly fired, crispy/chewy, spicy/piquant versions of lahmacun all over town. But, perhaps by sheer coincidence, the second of our top lahmacun joints is, like Borsam, located in the Asian side’s Kadıköy district. Halil Lahmacun is an old favorite and a celebrated destination for Istanbul 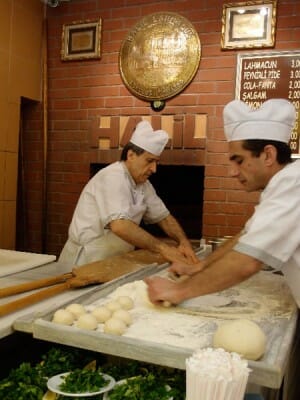 lahmacun lovers. In 1980, Urfa native Halil Dörtok turned his back on a promising career as a tailor to open a small shop with an oven, where he started making lahmacun. Perhaps it was a tailor’s attention to detail, but Halil’s oven-baked creations quickly won him fame in the lahmacun world. Today, Halil’s son Fuat is in charge of the oven and, judging by the traffic in the shop one Wednesday well before lunchtime, nobody is complaining.

Fuat pulled two lahmacuns from the oven for us – the perfectly round edges just slightly charred from sitting on the floor of the brick oven – and garnished them with a bit of parsley and a lemon wedge on the side. Mamma mia! This looked like a perfect lahmacun. The topping was light and had a clean taste of fresh vegetables, even without the parsley and spritz of lemon juice. “Crispy” was the word double-underlined in our field notes, followed by “awesome.”

Fıstık Kebap
Before we discovered our top two venues in Kadıköy, Fıstık Kebap was the be-all and end-all of lahmacun for us. Located on the Bosphorus in the upmarket district of Arnavutköy, Fıstık has no use for the pretensions that its 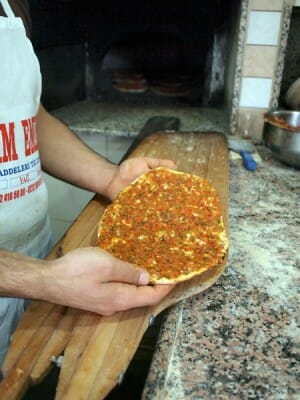 address may indicate. This is a down-and-dirty neighborhood kebab joint with a small seating area and a bustling delivery business. According to the overworked man at the oven, İbrahim Usta, more than 500 orders of lahmacun pass over his paddle every day. Fıstık also serves the usual selection of kebabs – Adana, Urfa, chicken – but the main attraction is the lahmacun.

We challenge those not so hot on lahmacun to resist oohing and ahhing as İbrahim Usta slides his paddle into the oven and fetches out a fresh one. The brick oven’s rage renders the crust a bubbled, crispy fantasy – charred here, still soft and pulsing like a soufflé there. If you like, İbrahim will roll your lahmacun into a wrap, or quarter it before plating it with a small salad for dressing. With a cold glass of şalgam, or fermented turnip juice, this quick bite is the perfect segue from lunch to dinner, or dinner to breakfast. İbrahim mans the oven until late. 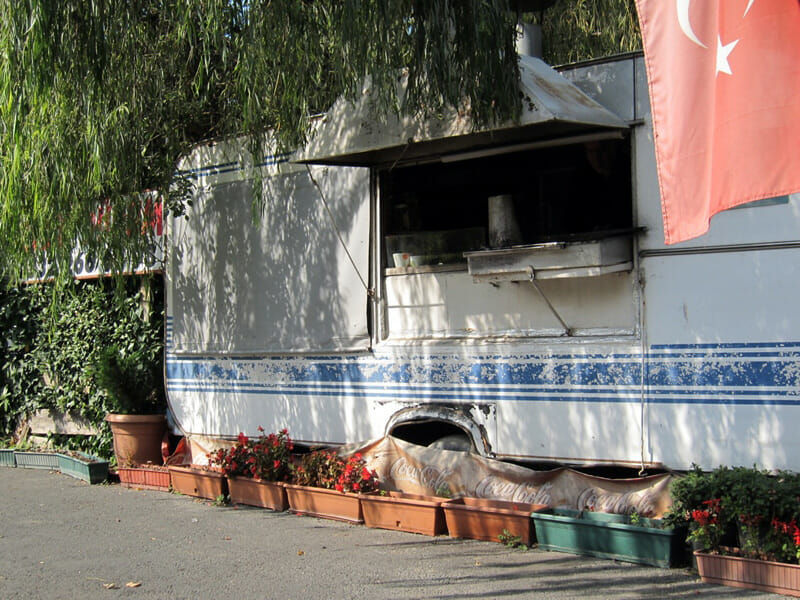 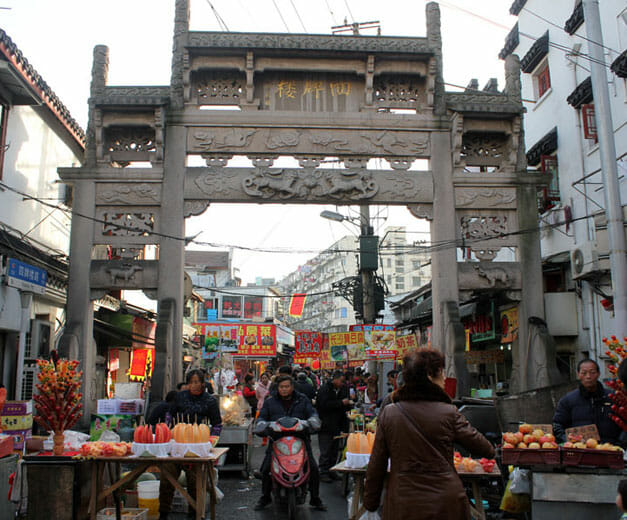