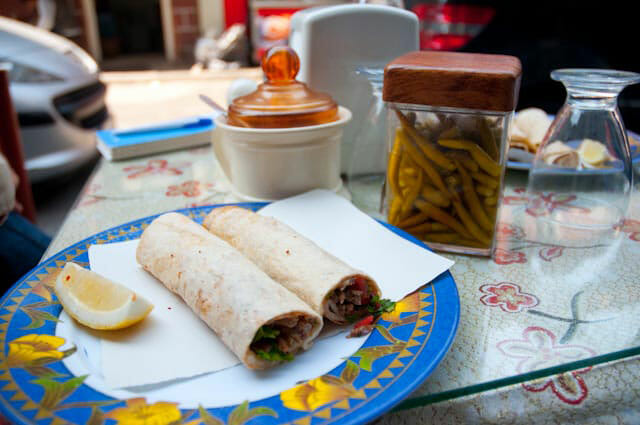 One of the big downsides to Istanbul’s otherwise great food scene is the lack of a credible Mexican option. We’re not asking for anything special, just a place that serves simple, tasty tacos or burritos. But when the craving for Mexican gets strong, we don’t despair; we just head down to the waterside neighborhood of Karaköy, home to Beşaltı Kirvem Tantuni, a hole-in-the-wall (literally) spot whose food and atmosphere remind us of the tiny taquerías in Mexico and the United States that we miss so much.

Beşaltı Kirvem is located in a ruined former Orthodox church in the heart of the old port district, an area still packed with import/export offices and frequented by stevedores waiting for work, whose streets have lately become the place for architecture and design offices. But the chic cafés and art galleries that have followed the buzz don’t seem to have threatened this old-school joint’s business. In fact, the recent gentrification of Karaköy has only made it harder to find a stool out front during lunchtime. 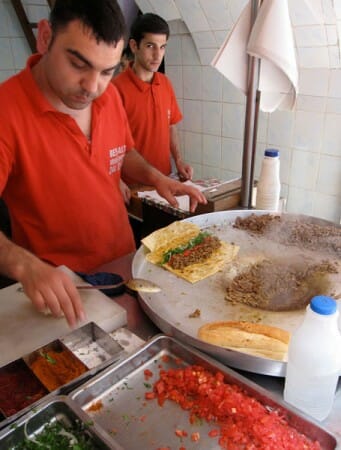 As its name implies, Beşaltı Kirvem serves up tantuni, one of Turkey’s classic – though shamefully lesser-known – street foods. To make this dish, thin strips of beef are fried and kept warm on the side of a massive circular pan with a concave depression in the middle. When an order is made, the cook scoops up some of the beef and reheats it in the middle of the pan in a steamy combination of oil and water, which creates a thin gravy. In the meantime, he starts warming up a long piece of lavaş, a flatbread that is the Turkish equivalent of the tortilla, on the side of the pan, letting the lavaş soak up some of the meat’s juices. Once the beef has been warmed up, the cook piles it on top of the lavaş – along with tomatoes, sumac-dusted onions, parsley and a combination of spices, including cumin and red pepper – and rolls it up into a long, thin torpedo that’s easy to gobble down in a few quick bites. Served along with nothing else but a side of hot peppers, it’s simple, yet delicious.

Tantuni originated in Mersin, a city on Turkey’s Mediterranean coast best known for, well, being the birthplace of Tantuni. From there, the dish has gone on to become a street food staple in other parts of the country. In Istanbul, the backstreets of Beyoğlu have loads of tantuni shacks that do a bustling business, particularly late at night. But we’ve found Beşaltı Kirvem, which caters to a lunchtime crowd in the more commercial Karaköy neighborhood, to be in a league of its own. It’s a two-for-one deal: the best tantuni and – we like to pretend – Mexican in town.