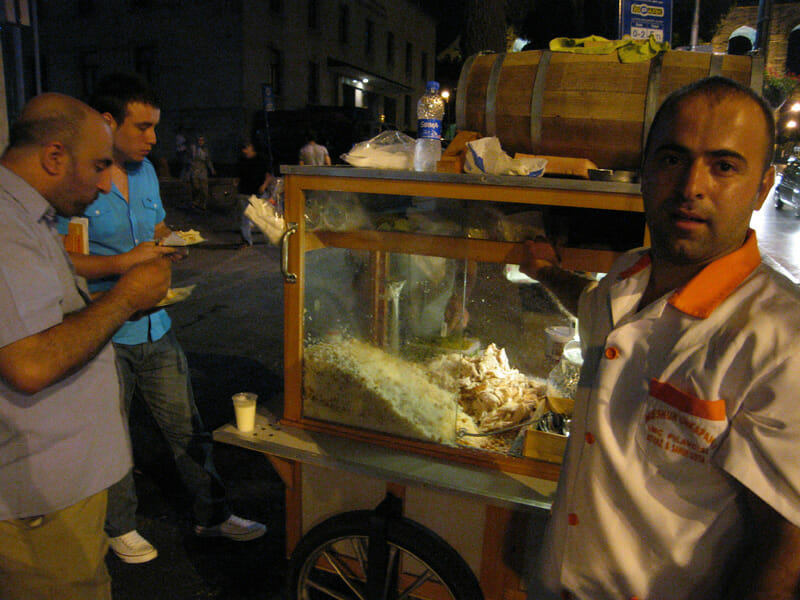 Late one night, zipping down a busy Istanbul thoroughfare in a taxi on our way home from the airport, we passed an intriguing scene. Huddled around a brightly lit food cart was a large group of men stuffing their faces in a kind of zombie-like frenzy. It almost looked like a scene out of Night of the Living Dead. What were they eating?

Curious to find out what was going on, we returned several nights later, armed with nothing more than a notepad, pen and an empty stomach. As we made our way up Atatürk Bulvarı, a busy road in Fatih that runs through the Byzantine-era Valens Aqueduct and down to the Golden Horn, the cart – and the crowd – were again there in the same spot. The cart, it turned out, serves up a pilav of rice, chickpeas and chicken along with ayran (a salty yogurt drink) – comfort food that comes at a very cheap price.

There are probably hundreds of pilav carts crisscrossing Istanbul every day, but this one is different. While the owners of other carts usually roll along trolling for business, this one stays put every night, letting the crowds come to him. “We’ve been in the same spot for 15 years,” said the cart’s operator, a hardworking man in a starched white chef’s smock, who would only give his first name, Ayvaz, for fear of getting in trouble with the authorities. “We’re famous – that’s why there’s always a crowd here.”

Indeed, at one point during the night, some 15 hungry customers were gathered around Ayvaz, who was furiously dishing out servings of pilav on small metal plates. “This is the best pilav. It just tastes different,” said one of the rice freaks, a big smile on his face. Ayvaz certainly knows what he’s doing: the buttery rice in his pilav was deeply flavorful, tasting like it was cooked in chicken stock. The perfectly cooked chickpeas, meanwhile, added texture to the pilav, which was topped with thin chunks of moist chicken breast. For a final touch, most of the people around us added a squirt of ketchup to their pilav, something that we also tried, and approve of. The ayran, poured from a small wooden cask resting on top of the rice cart, seemed like the perfect drink to wash down the pilav.

The crowds that gather every night around Ayvaz’s cart may be the best testament to the power of his pilav. But there’s another: imitators. Following in Ayvaz’s footsteps, other cart operators have also set up shop along Atatürk Bulvarı, offering the same basic pilav and ayran combo. But Ayvaz doesn’t seem to be worried. “Those guys,” he said, pointing to his competitors, “they’re not pilav makers. They’re pirates.” 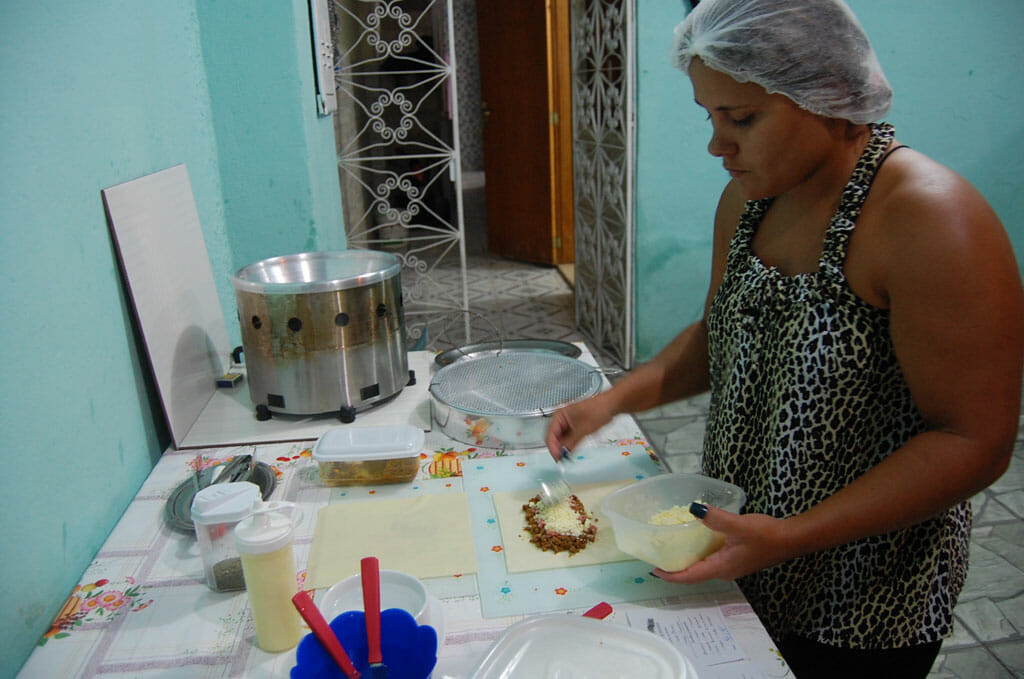 See a real side of a favela on our Culinary Soul of Old Rio walk!

Pastel da Carmen: Midnight Munchies in the City of God

Rio | By Taylor Barnes
By Taylor Barnes
RioCarmen and Eduardo’s story could be an allegory for the rise and uh-oh moment of Brazil’s new middle class – except their tale is a real one, one that ends with a really nice savory fried pastel that’s become a midnight munchie hit with their neighbors in Rio’s iconic City of God (Cidade de Deus)…

Add to favorites
Meşhur Unkapanı İMÇ Pilavcısı
Atatürk Bulvarı, Unkapanı (Near the “İMÇ Çarşışı 1. Blok” sign on the eastern side of the street, on the way to the aqueduct. Look for the crowd.)
Tel. No phone
Hours: 7pm-2am