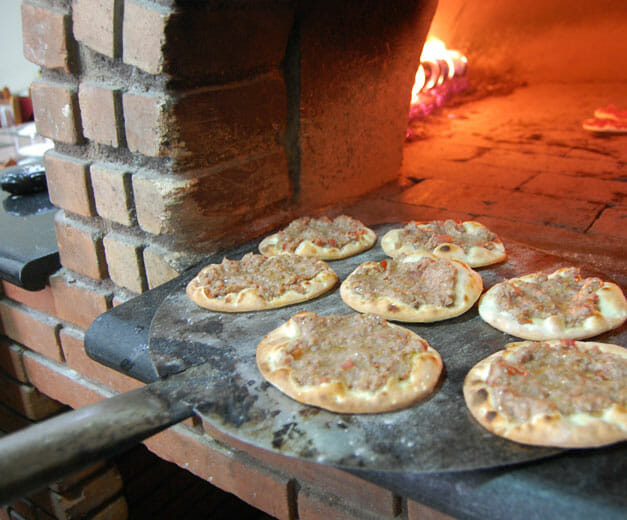 Levantine São Paulo: A New Start in the New World

If stepping foot in Brazil doesn’t make your taste buds start tingling in anticipation of kibes (bulgur wheat croquettes), esfihas (thin meat and cheese pastries), tangy molho arabe and hummus, it’s because you haven’t studied up properly on the rich history of Arab migration to Brazil – and the supremely tasty gastronomical mark it’s left on this country’s snack food culture.

Arabs have been migrating to Brazil for more than a century, with motivations ranging from economic opportunity – the “American Dream,” continentally speaking – to fleeing civil conflict in their homelands.

The early Arabs who arrived in Brazil around the turn of the 20th century were called turcos because they arrived with a passport from the Ottoman Empire. They were largely Lebanese, with smaller numbers of Syrians, says Patrícia El-moor, a sociologist from the University of Brasília who studies Arab migration to Brazil and maintains a blog on their heritage in the South American nation. Early Syrian and Lebanese migrants were largely Christian and dreamed of a better life across the Atlantic, blending into Brazil as they often swapped Maronite or Orthodox Catholicism for the Roman Catholic Church here. They developed a reputation as shrewd businessmen, with the term mascate referring to a traveling salesman prosperously exploring the vast interior of the South American nation.

“They had an idea that America was the great opportunity of their lives,” says El-moor.

By the 1970s, Lebanese migrants to Brazil were increasingly Muslim, as many people looked to flee the civil war in their country. They concentrated both in São Paulo and in the commercially strategic tri-border area of Iguazu Falls, where Paraguay, Argentina and Brazil meet. To appreciate how many migrants came here, consider this: The size of the Lebanese diaspora in Brazil is larger than the population of Lebanon itself nowadays.

Now the Arab population in Brazil is getting a contemporary boost, as the Brazilian government takes a proactive stance in encouraging Syrian refugees to come here – no fewer than 100 percent of Syrians who have applied for asylum status in Brazil have received it, making them already the largest group of refugees in the country.

Many are finding their way to the colorful and “hey-I’ll-sell-you-anything” commercial São Paulo neighborhood of Brás, where Arab stores and restaurants thrive. The slightly quieter adjacent Pari neighborhood also hosts a mosque that has served as a start-anew meetup point for refugees. Street vendors blanket the sidewalks of two neighborhoods with brand-name shirts, cell phone accessories and stylish lace diaper covers as shoppers come even from other Brazilian states, trash bags slung over their shoulders, to get what are supposed to be some of the best bargains in the area. Apparel stores with curvy mannequins are interspersed with snack joints and import stores, where fig jam, cans of tahini and juicy shwarma sandwiches abound.

Below is a list of some worthy stops in this new heart of the Brazilian-Arab crossroads: 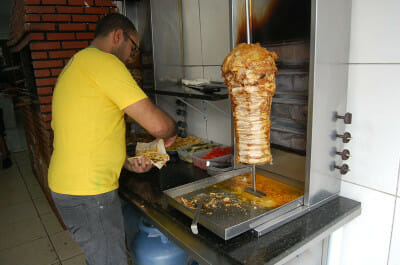 Casa Líbano
A popular halal restaurant that’s regularly popping around lunchtime. You’ll find some items that are rarities in Brazil, like pomegranate juice (suco de romã) and an intriguing vegetarian menu (like the Brazilian-beloved kibe with pumpkin, onion, chickpeas and spinach). But the main attraction is the meat-lover’s options, like stuffed grape leaves and espetos (skewers) of grilled lamb and seasoned beef.

Abu Ali
At this compact, no-frills neighbor of Casa Líbano, we stock up on boxes of figs, apricots and walnuts or sit down for a plate of baba ghanoush or coalhada (curdled cheese) to accompany a za’atar (an open-filling esfiha, as opposed to the typical pocket kinds here) or a chicken or beef shwarma, which comes with tomatoes, onions and potatoes.

Sucos Naturais
Step into the generic-looking galeria and scan the white stands for a poster with Arabic writing. That’s where you’ll find Jehad Alhafi. A father of four, Mr. Alhafi had a prosperous water treatment business in Syria. That was before the war and the several years he spent listening to gunfights in the street and watching the business he built smolder. He had heard the stories about the millions of refugees in camps in Lebanon, Jordan and Turkey, who have some humanitarian assistance but no prospects for building a dignified new life. “No chance to work. I don’t want to go to another country [where I can only] eat and sleep in a camp,” he says.

That’s why he took Brazil up on its offer to take in Syrian asylum-seekers. His life is hardly what it used to be – his family of six lives in a two-bedroom apartment, and he works long days to sustain his fresh juice and esfihas stand, counting on the steady stream of shoppers who come to the famous Brás market. He found the local fruits guava and maracujá (passion fruit) to be splendidly delicious. As his peers try to get on their feet, he jokes that he’s proud to be the first Syrian refugee to have a car in Brazil. That’s the profile of many Syrian refugees in Brazil now – qualified professionals with advanced degrees, like judges and engineers – who now hustle to get manual labor jobs like stocking shelves. If food is a language we use to meet people to whom we otherwise might not know what to say, have a snack at Mr. Alhafi’s stand and appreciate a man who is still smiling after his world was turned upside down.

Altanur
A tasty and fragrant surprise as you wander further into Pari, this new grill house was set up by a former hotel restaurant chef who’s worked in Dubai, Jakarta, Qatar, Malaysia and Hong Kong. Specialties are the piping-hot esfihas from his clay oven and sizzling chicken, beef and onion espetos. 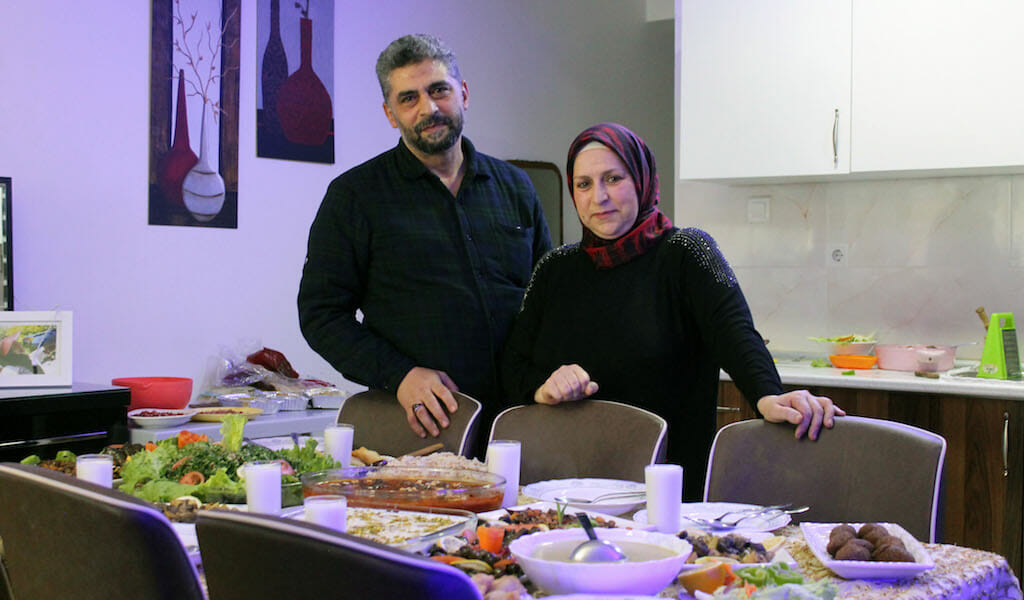 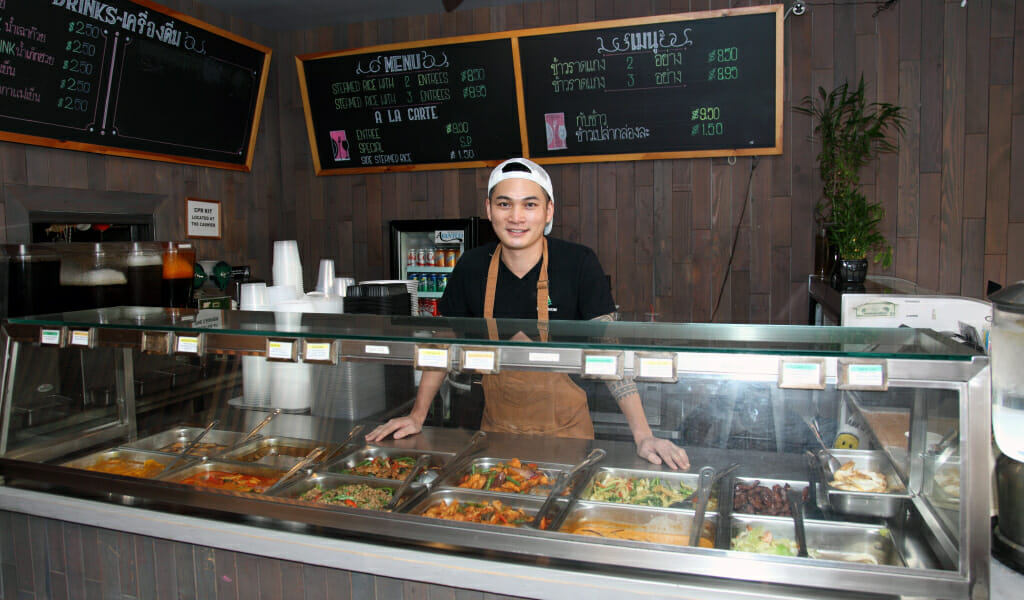 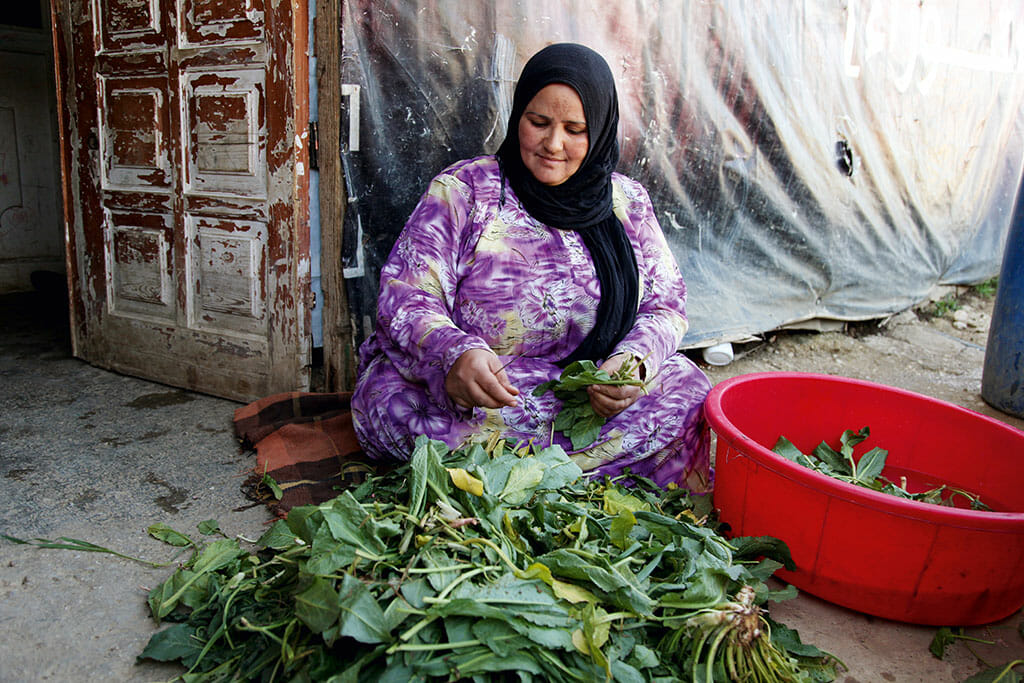 Lisbon | By Célia Pedroso
By Célia Pedroso
LisbonBarbara Abdeni Massaad may be an award-winning food writer and photographer, but she is also a humanitarian. After spending quite some time with the Syrian refugees who were living in horrible conditions not far from her home in Beirut, Barbara took her camera and began photographing people in the camps in Lebanon, especially children. This…