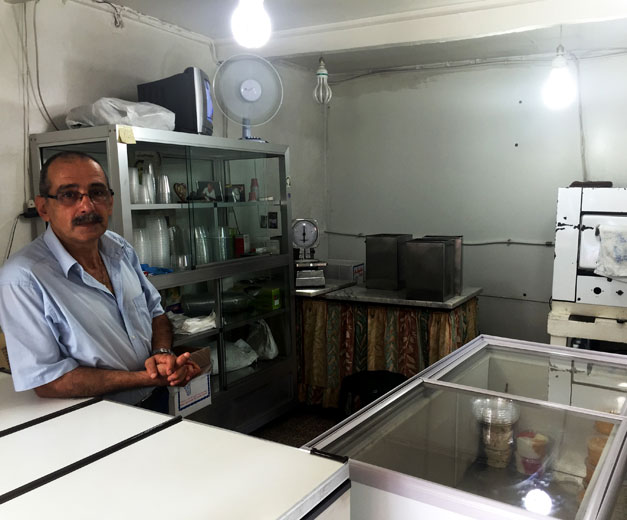 By Paul Gadalla and Rita Makhoul

The end of summer in Lebanon can be tricky. Sometimes it begins to rain in September, causing our favorite summer places to close early; other times it stays hot and humid almost until December. While it’s still hot out, locals seek out one of the treasured regional deserts, booza. At first glance, it seems like ordinary ice cream, but the minute you scoop it up you soon realize this frozen ice cream has a gum-like stretch. Booza is typically known as Arabic ice cream and is made with mastic gum, which prevents it from melting quickly in the hot summers we usually face. Unfortunately, many of the more traditional booza shops have given way to overpriced gelato parlors that serve extremely sugary ice cream to mask their artificial flavors. Few remain that serve traditional Levantine ice cream made with fresh fruit and cream. Ask anyone where you can find this delight, however, and they’ll point you to Hanna Metri. 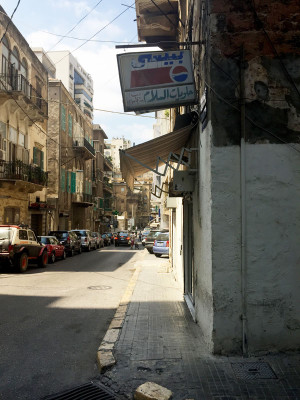 Finding Metri’s shop is an adventure in itself, as it is tucked away on a quiet side street in Beirut’s historic Achrafieh neighborhood, known for its Ottoman villas and neoclassical houses, which are increasingly being torn down for high-rises. Achrafieh has always had a high-end reputation and was once home to many of the city’s aristocratic families. Jokes and stereotypes abound about its more francophone population, and the area still retains an Old World charm. While searching for what we thought would be a fancy shop, we stumbled upon some of the area’s famous tauntate Achrafieh (literally, “aunts of Achrafieh,” a pun on the neighborhood’s aristocratic francophone ladies) lining up to buy fresh booza on a hot September day and of course still making sure to look picture-perfect.

In contrast to the area, the shop has changed little, with an old-fashioned Pepsi sign hanging outside, “Halaweyat Al Salam” (“Al Salam Sweets”) written beneath and “Hanna Metri” written next to it in faded ink. We walked into the shop to find plain white walls, a couple of chest freezers, a marble counter in the back with an old-timey scale, an oven from the 1950s, floor tiles from the 1960s and a photograph of the late Hanna Metri himself. Hanna’s son, Metri, who currently runs the shop, was serving the customers as his mother crushed pistachios in the back.

Hanna Metri opened Halaweyat Al Salam in 1949 when he was just 20 years old, naming the place after the neighborhood football team, which used to train nearby. While the shop now goes by the founder’s name, it continues to be known not only for ice cream but also for seasonal Lebanese sweets – such as ma’amoul, a cookie stuffed with nuts, Turkish delight or fig and dusted with powdered sugar, and namoura, a syrup-drenched semolina cake – which it stops making during the hot summer months. Of the ice cream, only a few choice flavors are available: almond, chocolate, pistachio and the famous milk flavor that’s made out of meske gum (acacia) and sahlab. Metri also makes sorbet out of fresh seasonal fruits such as lemon, strawberries, berries and apricot. 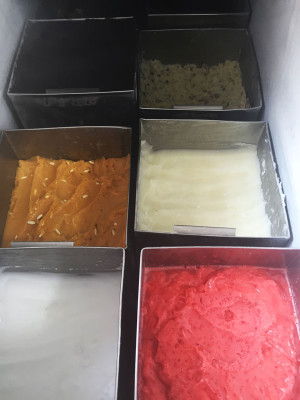 For Metri, quality comes first. When asked whether he has a certain supplier, he said, “I shop around. I go to different stores. If no one has what I need at the proper quality, I simply won’t make the flavor.” No additives are added to the booza, and the recipes have remained unchanged since the shop first opened its doors. Asked if his father had a supplier, he reflected on better times: “In those days, there were trams in Beirut. You would take the tram to Downtown Beirut and go to the souks [which were later destroyed in the Civil War and replaced with a shopping mall], and we would visit various vendors and buy what we thought was good.”

Metri told us that he started going into the shop to watch his dad work at the age of eight because he was curious and wanted to learn how the sweets were made. “Only I know the ice cream recipes, which were never written down. I learned how to make everything by watching my father work and asking him questions.” He continued going into the shop and helping his father until he graduated from high school. Though Metri wasn’t interested in going to university to continue his education and instead wanted to work in the shop with his dad, Hanna insisted his son should continue his education. He had always missed spending holidays with the family since they were the busiest times at the shop, and he did not wish Metri to experience the same.

While continuing his education in Paris, Metri would have his father send him recipes of some of the Lebanese sweets, and he made them over and over again until they were as good as the ones his father produced. He later returned to Beirut and became a banker but still came by the shop to help his father after work, on weekends and during the holidays. When his father was ready to retire, Metri resigned from the bank and took the reins from him.

Banking is an honorable profession, but making the best booza in town was clearly a higher calling. 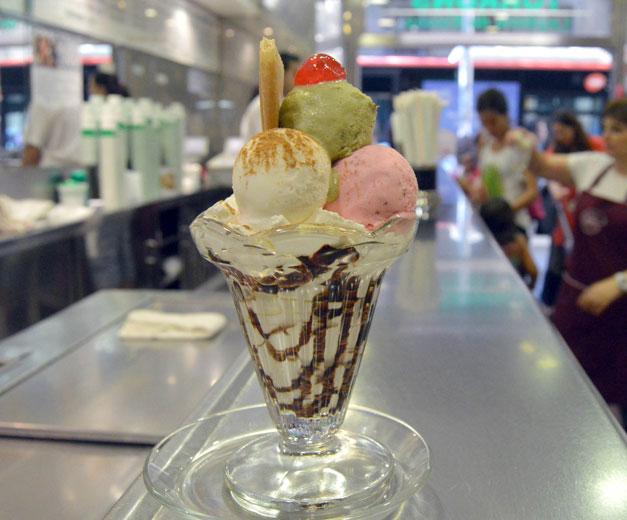 Barcelona | By Paula Mourenza
By Paula Mourenza
BarcelonaAs you might expect from a city whose weather forecast tends to be sunny, Barcelona has plenty of excellent ice cream options, even as summer fades into fall. And, sure, like most of the world’s food-loving metropolises, this town has its share of internationally loved, Italian-style gelaterias – many even run by real, live Italians.…

Barcelona | By Paula Mourenza
By Paula Mourenza
BarcelonaEditor's note: It's Cool Treats Week at Culinary Backstreets, and for our second installment, we head to Barcelona, where turronerías and ice cream parlors serve up traditional flavors made from locally sourced ingredients. As you might expect from a city whose weather forecast tends to be sunny, Barcelona has plenty of excellent ice cream options, even as summer fades…