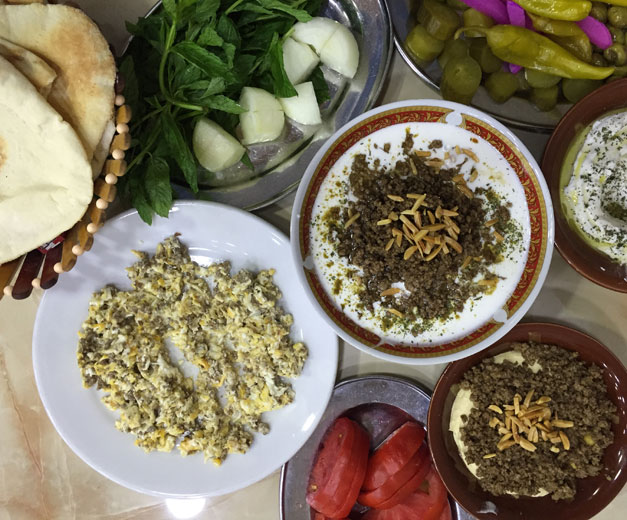 By Paul Gadalla and Rita Makhoul

Breakfast in Beirut can be a lavish affair and would make even the Ottoman sultans of old jealous. Although Beirut is known as a 24-hour city, with a lively nightlife scene fused with an endless amount of social gatherings, people still find time to enjoy a long morning meal with loved ones on weekend mornings. The ingredients of Lebanese breakfast foods are quite simple – chickpeas, yogurt, eggs, tahini, lemon juice, ground meat, bread and olive oil – and are assembled in a number of ways that make breakfast something not to be missed while in Beirut.

The typical dishes at the breakfast table are scrambled eggs with ground meat, masabah (chickpeas boiled and doused in olive oil and tahini), hummus and labneh. And then there’s the grand star of the Lebanese breakfast table: fatteh. Coming from the colloquial Arabic word fettfet, which literally means “making crumbs,” fatteh comes in a variety of ways, but it mainly consists of chickpeas, baked bread, olive oil and yogurt. Villagers once turned last night’s leftovers into the next day’s breakfast. And now a breakfast restaurant’s reputation is usually based on how good its fatteh is.

One of the best places to enjoy a full-fledged Lebanes 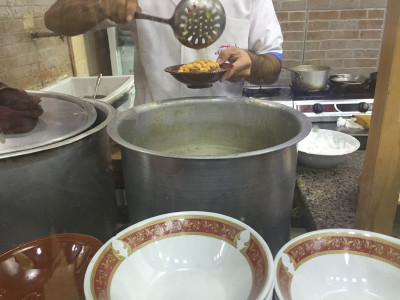 e breakfast is Abu Hassan, located in Beirut’s predominantly Armenian suburb of Bourj Hammoud. Refugees of the 1915 Armenian Genocide were granted citizenship by Lebanon’s then French government, and their descendants settled in the area, eventually turning it into a bustling neighborhood known for its handicrafts, cheap clothing stores, knockoff goods and excellent food.

On a sunny Saturday morning, we found Abu Hassan’s grandson manning the cash register. It felt like a Beirut from a bygone era. The décor is simple, with white tiles. Unlike most restaurants in the city, all the specialties and dishes are still written in Arabic. Fairouz, the great songstress of Lebanon, crooned in the background as the kitchen workers opened big pots of boiled chickpeas to distribute into bowls for all to see behind a glass divider. Because Bourj Hammoud is a working-class neighborhood, the restaurant is frequented by local families or single men looking for a good meal before heading to their jobs, with the occasional reveler coming to eat after a night out on the town. Tables come equipped with fresh veggies and a glass briki (pitcher) full of water.

Abu Hassan’s origins stretch back to 1942, when Abu Hassan himself opened his first breakfast place in Beirut’s Gemmayze neighborhood, just east of downtown. “At first we were located in Gemmayze, but once the Civil War broke out it wasn’t safe, so we moved to Maarash Street in Bourj Hammoud, and in the 1990s we moved to our current location,” said Abu Hassan’s grandson, Hassan. Asked about the family patriarch, Hassan sadly replied, “He actually ran the store himself until he passed away in 2006, and now the family runs it.” The restaurant is open 24/7 and has become a popular late-night hangout for people after they make the rounds at Beirut’s pubs and clubs. But Abu Hassan is still best enjoyed in the morning, whether it’s to nurse a hangover or simply to enjoy a breakfast with friends and family. 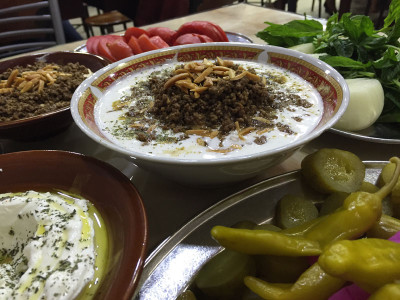 We ordered their smooth and silky labneh, their hummus with a savory heaping of ground lamb, and their scrambled eggs and ground meat, all cooked to perfection. The true show stealer was a bowl of fatteh with meat with the right balance of citrus and yogurt. The portion was so big that even two people couldn’t finish it.

In keeping with its working-class surroundings, a breakfast at Abu Hassan’s costs about $10 – a steal compared to some of Beirut’s better-known haunts. 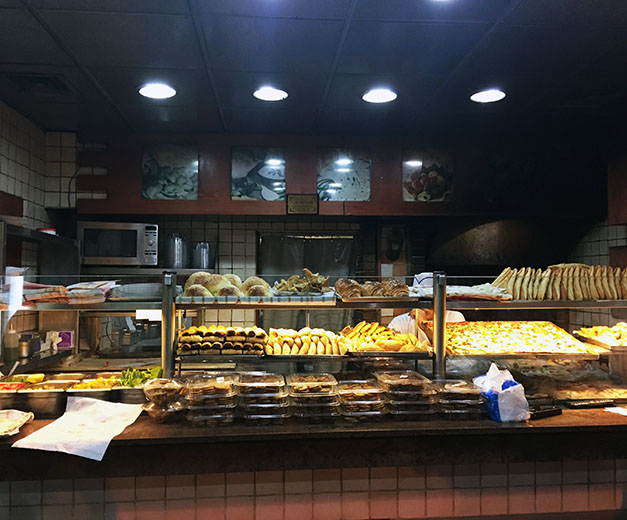 Beirut | By Paul Gadalla
By Paul Gadalla
Beirut The manousheh (plural manaeesh) is one of the defining staples of Lebanese food. In a country known for its divisions, the universally loved manousheh might be the breakfast food that unites all Lebanese. A manousheh is a round flatbread cooked in a big oven or on top of a saj (a domed oven… 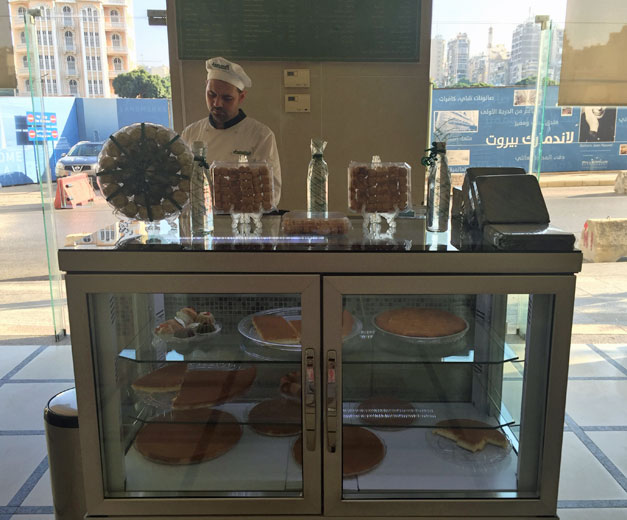 Beirut | By Paul Gadalla and Rita Makhoul
By Paul Gadalla and Rita Makhoul
Beirut An iconic Middle Eastern dessert, knefeh is to Lebanon what waffles are to Belgium. There are no records of its origins, but according to local legend the cheese-filled pastry comes from the Palestinian town of Nablus, and now it exists in different variations around the region, including in Lebanon. (In Turkey, it is…

Oaxaca | By Margret Hefner
By Margret Hefner
OaxacaEditor's Note: Unfortunately, since first reporting this piece, we have learned that Eduardo has unexpectedly lost his lease. He is in the process of relocating the restaurant. To keep up with him and the new location, please check his Facebook page. Oaxaca, consistently ranked as one of the three poorest of Mexico’s 31 states, can…