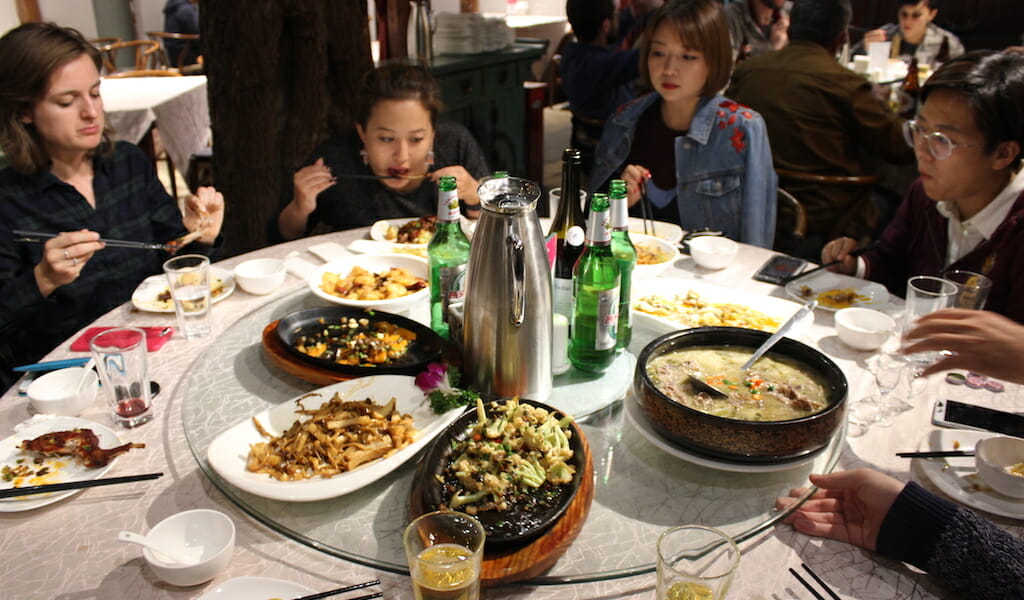 Spring Trees: Sichuan for Everyone

In Beijing, it’s not uncommon for a waiter to ask “有忌口吗?” before you start ordering. It translates as “Anything you don’t eat?” With a large Hui Muslim minority population, Beijing is more accustomed to diners with dietary restrictions than southern cities like Shanghai. In the Paris of the Orient, it’s not uncommon to explain that a diner is vegetarian and still have their tofu or vegetable dishes come out of the kitchen sprinkled with minced pork. The common retort when pointing out the meat is “It’s just a little bit – for flavor!”

But Spring Trees takes that northern dietary accommodation a step further, offering meat-free renditions of classic Sichuan dishes alongside the pork-laden options. It’s perhaps the best option in Beijing for diners looking for a pork-free (or fully veg) restaurant – and it’s a spot even meat eaters will enjoy. Most of the vegetarian dishes are denoted by the characters “健康” which translates to “healthy.” 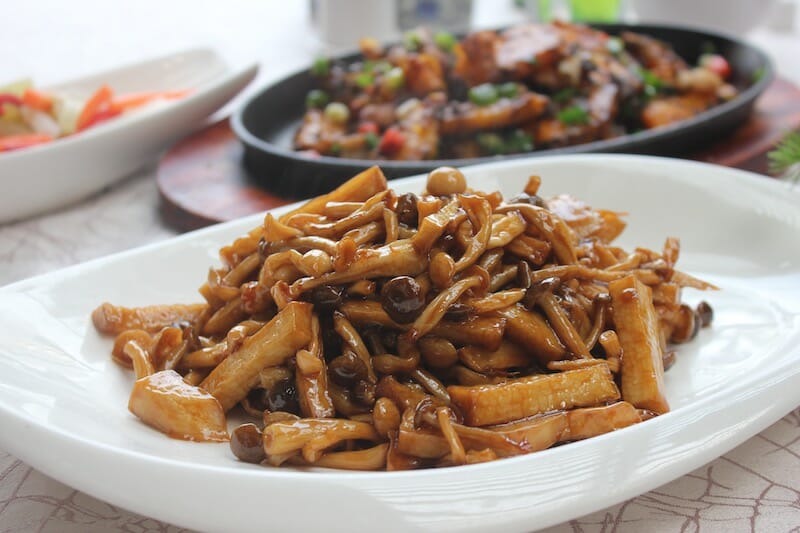 There are several branches of this popular restaurant around the capital – you can’t swing a stick without hitting a Sichuan restaurant in Beijing – but the original hutong location in Beijing’s Dongcheng district is our favorite. Located in a converted courtyard building that so far (knock on all of the wood) has avoided Beijing’s “Great Brickening,” Spring Trees is named for the two real trees growing right in the middle of the dining room. (It also shares its Chinese name – which translates as “Threshold of Spring” – with a movie from 1963.) Located almost halfway between the Drum & Bell Towers on the west and the Lama and Confucius Temples on the east, it’s the perfect lunchtime spot for anyone looking for a bite between sightseeing stops in the neighborhood.

Twice-cooked pork (回锅肉 Huíguōròu) is a classic Sichuan dish of thin slices of fatty pork belly that is first quick boiled, then flash-fried with fermented black beans and chile oil in a wok. At Spring Trees, it’s delicious – but if you’re looking for a healthier twist on this favorite, try the Jiànkāng lǎo nánguā (健康老南瓜). Mature pumpkin is subbed in for the pork belly, and the addition of the hearty, sweet gourds melds perfectly with the umami flavors of the fermented beans. The Sichuan pickles (跳水时蔬 Tiàoshuǐ shíshū) are a pungent mixture of carrots, Chinese celery and daikon radish marinated in vinegar and Sichuan peppercorn.

For the meat eaters, the roasted rabbit leg (麻辣烤兔腿) is a must-order, with a generous portion of succulent meat served on the bone – you’ll be surprised how much meat a rabbit leg can offer! They offer excellent renditions of the classics – mapo tofu, or 麻婆豆腐; kungpao chicken, or 宫保鸡丁; and dan dan noodles, or 担担面 – as well. There’s really no way you can go wrong here.

Mexico City | By Lydia Carey
By Lydia Carey
Mexico CityAlex Montes and his business partner, Askari Mateos, have spent years fussing over their recipes for tlayudas: large, thin corn tortillas topped with various ingredients. So what is the secret to a great tlayuda? Montes thinks for a moment. “The asiento [the unrefined pork lard that covers the tortilla],” he finally says, “and the beans,…
Spring Trees
12 Cheniandian Hutong, off Andingmen Inner Street, Dongcheng District
Tel. +86 10 6046 9521
Hours: 10:30am-9pm