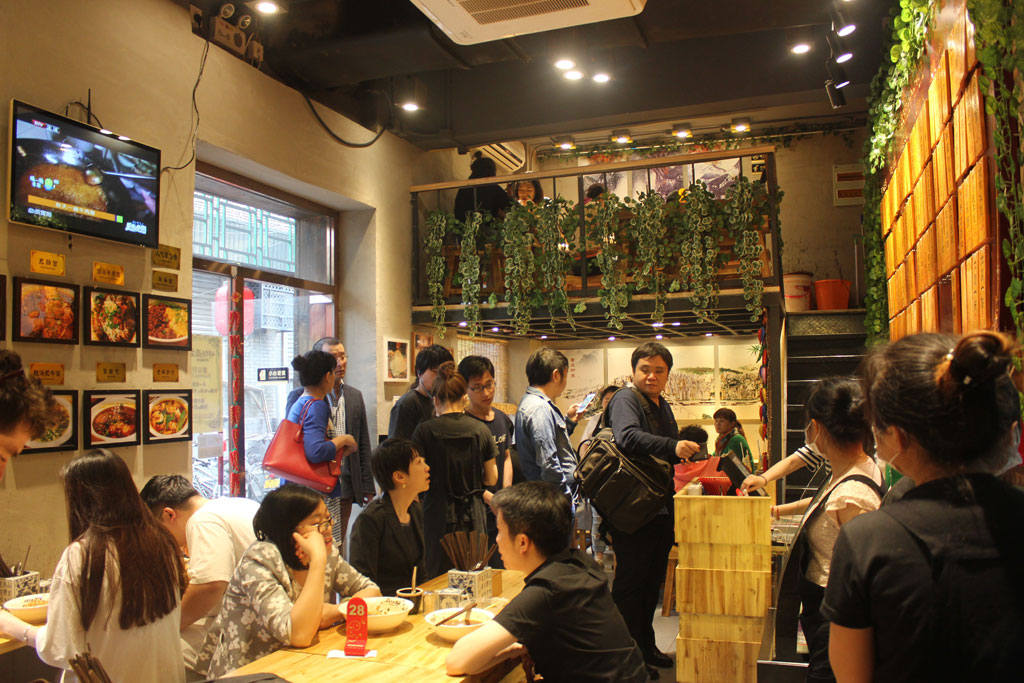 “Can you eat spice?” the waitress asked after taking our order. Her hand hovered hesitantly over the cash register.

“But… Can you?” she asked again, looking to the other waitresses for help.

“Yes!” we responded emphatically, trying to vocally convey our love of the tongue-tingling, lip-burning action we had come for.

“Umm… These are Chongqing noodles. They are really spicy,” she said with her hand still in a no-man’s-land somewhere between our money and the cash register, unsure whether our foreign palate had what it took to slurp down a bowl of noodles from China’s spiciest city.

“We know, we like them,” we replied. “If they are too spicy for us, we will not be mad. It will be our fault, we promise.”

She finally gave in, promising not to let us down by giving us the laowai level of spice, and sent the order back to the kitchen. 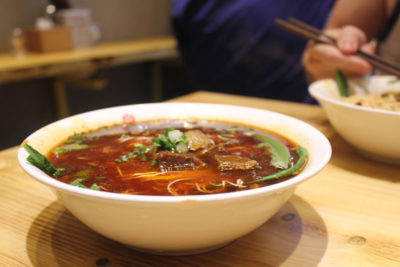 In Chongqing, the noodle-crazy municipality in central China, Pang Mei is famous, ranking among the sprawling city’s top 20 noodle shops. The noodles have been fêted by celebrities and foodies alike, including Li Yundi, one of the country’s most famous pianists and a Chongqing native. Translated literally, the name of this place is “Fat Sister’s Noodle Shop” (although in Beijing, someone has given it the more palatable English name of “Decent Sister”).

Pang Mei has been serving up bowls of spicy noodles in Chongqing for more than 20 years and opened in Beijing last April down a tiny hutong in the city center. On days when they pound chilies flown in from Chongqing into homemade spicy pastes and sauces, the fumes in the tiny hutong are enough to make your eyes water.

Pang Mei’s most famous dish is the spicy beef noodles (牛肉面, niúròu miàn), a standard dish in many regional Chinese cuisines, but one that the chefs take extra care with here. The beef is a tendon-layered cut from the front shank of the cow, simmered for more than four hours in chili oil, until the tender chunks absorb all the fiery goodness of the homemade spicy broth. The noodles are alkaline, giving them the same bouncy texture of Japanese ramen. You can order it with fatty intestine too if you’re feeling adventurous (肥肠面, féicháng miàn). 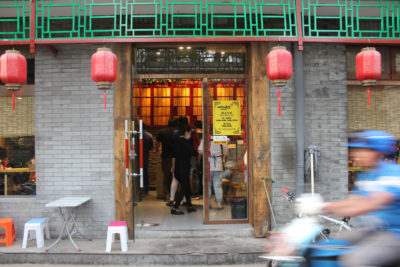 But how’s the spice level? Well, it didn’t help that we had a cold and were sniffling. We plowed our way through a bowl of pork wontons (红油抄手, hóng yóu chāoshǒu) the size of a soup tureen in the same spicy soup as the beef noodles. Chili oil, chilies plus Sichuan peppercorn opened our sinuses in a way Vick’s VapoRub never has. After we went through half a box of tissues, a waitress came up and asked if we’d like a bowl of clear broth. We opted instead for the “cold cake” (凉糕, liáng gāo), a homemade compressed patty of rice milk flavored with brown sugar. Nothing cools the infernal burn of Sichuan peppercorn like this famous Chengdu snack. As soon as our lips stopped tingling, we were already thinking about our next bowl of Fat Sister’s noodles. 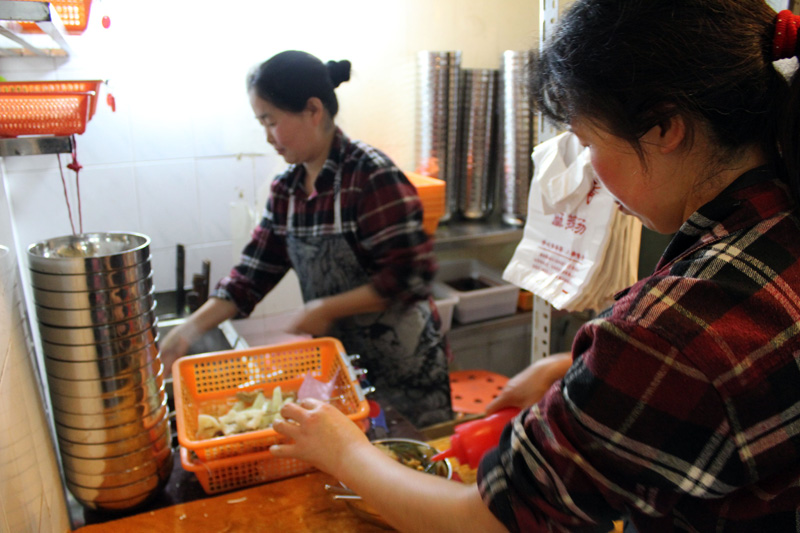 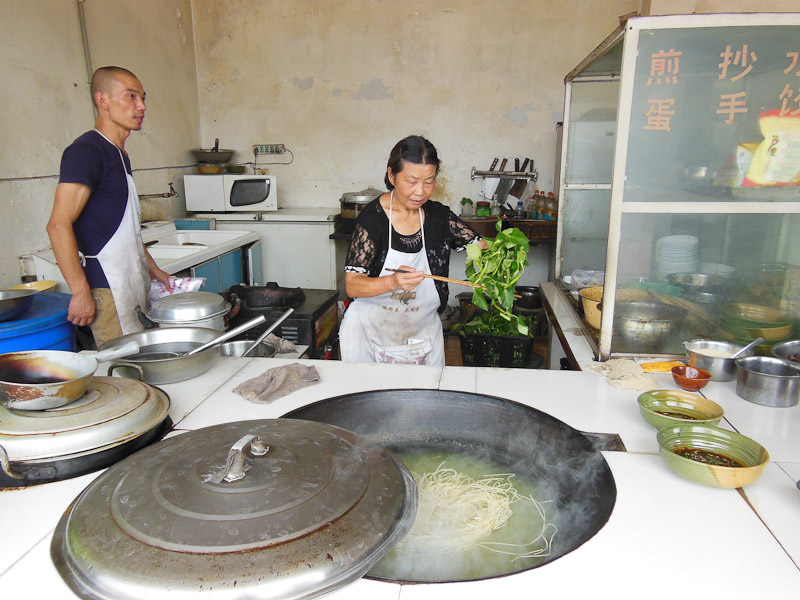 Shanghai | By Kyle Long
By Kyle Long
Shanghai It’s been two weeks of cycling through China’s Qinghai province, and the food selection is slim. The majority of the province sits on the vast Tibetan Plateau, well above the tree line in conditions too harsh for significant cultivation. Yaks graze on well-trampled grass as far as the eye can see, with white… 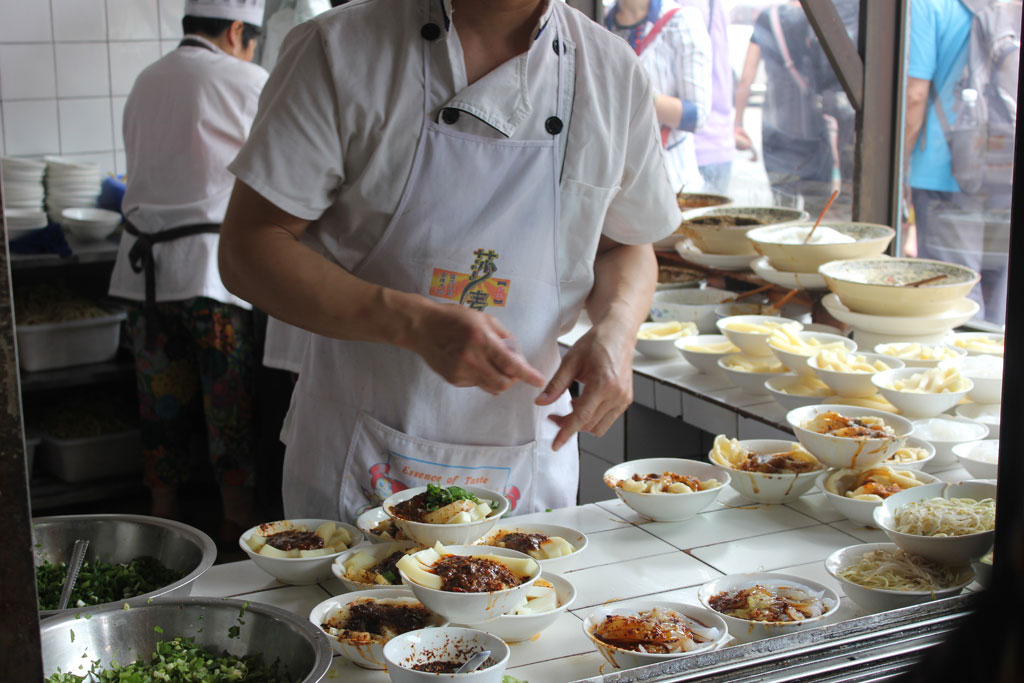 Shanghai | By Jamie Barys
By Jamie Barys
Shanghai When you’re in the capital of Sichuan province, snacking is a way of life. Noodles made of bracken, wheat, eeickpeas, mung beans and more, as well as tofu puddings and dumplings, make up the city’s “small eats” (小吃, xiǎochī) scene, served from what’s colloquially known as “fly restaurants.” A step above street food,…