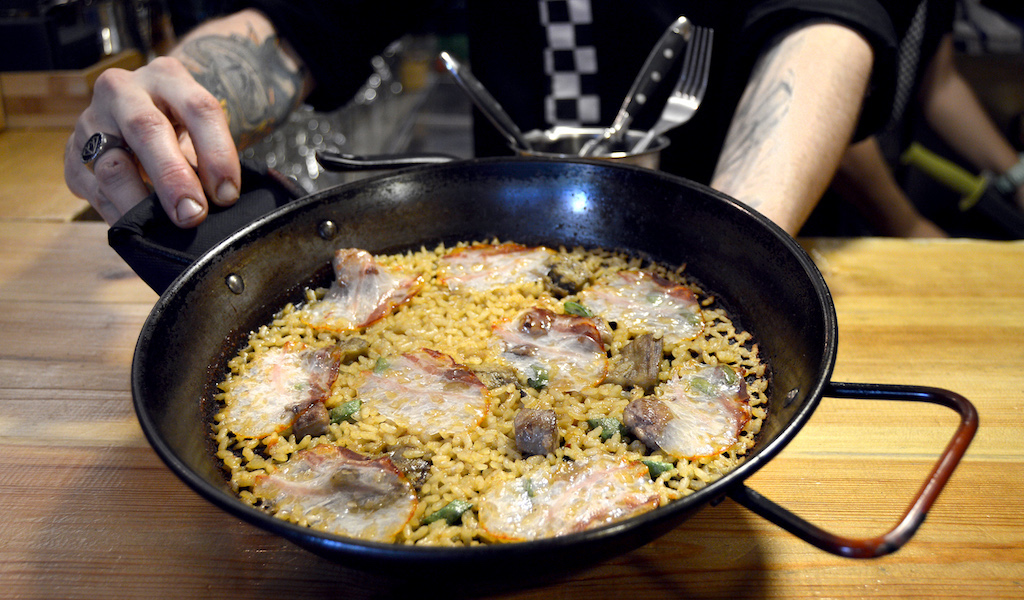 When you hear something go crunch on the left side of L’Eixample, whether crispy bread or churros, croquettes or socarrat, the toasted bottom of paella, there’s a good chance it came from the kitchen of Miquel Pardo.

The 30-year-old chef runs his own restaurant called, appropriately, Cruix (Crunch), a place to have fun with food and discover amazing rice dishes from Castellón, a province in the Valencian Community. A native of this region, Pardo mixes his granny’s sofritos with a creativity inspired by the Adriá brothers, cooking dishes that will fill the stomachs of his relatives and friends, among whom he counts the clients of his restaurant.

After cooking school, Miquel sharped his skills in culinary temples like La Sucursal in Valencia and ABAC in Barcelona. He also contributed to other brilliant projects, like chef Rafa Peña’s eco-Mediterranean menu at Bistró de Mar, one of the restaurants at Hostal Empuries, a hotel in Girona.

But his rice-cooking skills were honed much earlier. “My cuisine started in a restaurant in Benicassim, my boss Ricardo made paellas all the time and he always had amazing sea products like espardenyes [sea cucumbers], caixetes [Arca noae], dátiles de mar [Lithophaga lithophaga],” Miquel explains. “He was my first culinary father! Though maybe my strongest culinary influences come from Rafa Peña and Ricard Camarena. Rafa taught me to be natural, relaxed and casual, and make an awesome dish in [only] two moves. From Ricard, I learned his impressive flavors.”

We notice all these qualities in Cruix, a relaxed spot putting out surprising dishes that are full of flavor and show a respect for products and traditional techniques. But very often a good meal is incomplete if it cannot be shared with others. That’s especially true for Miquel, who considers feeding loved ones an essential element and one of the joys of cooking. 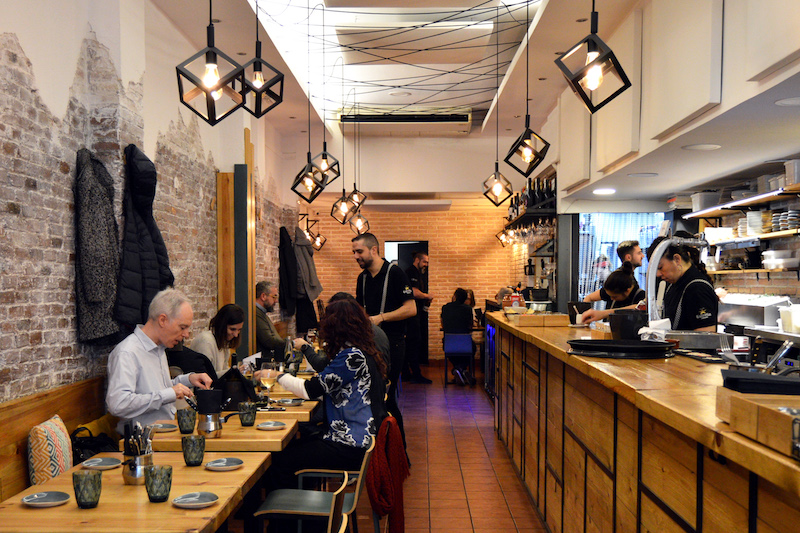 As he explains, “I was dedicating myself so much to a profession that I loved, but not executing it in [the way that I wanted]. One of the main reasons I loved cooking was the ability to make food for my family and friends – sharing a Sunday paella and beer with my people! I always loved those moments.”

So Miquel decided to forge his own path, opening a restaurant that brought him closer to his tribe, which extends beyond his relatives and friends to include his clients and neighbors. “I love to bring this feeling of friendship and closeness in my restaurant. Like when a granddaughter brings her granny to taste the rice here. This just fills my soul,” he says.

His family has also made an important contribution to his cooking, particular the rice dishes he’s known for. “The sofrito that we use in many of our bases is the one I learned from my granny Carmen,” says Miquel, “made with a lot of olive oil, garlic, natural tomato, a bit of nyora (a local dried red chile) and paprika.”

As for why he has chosen to specialize in rice, the answer is easy. “In all of eastern Spain you can eat wonderful rice dishes,” he says, whereas in Barcelona that’s often not the case anymore. “Here we have too many pizza places and very few quality rice places. Our rice dishes cost €14 per person, the price is extremely adjusted because of my stubbornness – I want to offer great rice at a pizza price.” In short, he adds, “we are rice people, we are seafood and caldereta [fish soup]. I love pizza, but we are rice.”

“Our rice dishes cost €14 per person, the price is extremely adjusted because of my stubbornness – I want to offer great rice at a pizza price.”

Yes, we are rice, but we travel. And Miquel does too. So while he’s dedicated to this traditional Spanish dish, he also incorporates powerful flavors from Asia, North Africa and even Mexico into the menu, connecting the many branches of our world with his deep roots.

While the individual rice dishes alone are worth a visit, we can never resist the tasting menu – they offer two versions, the Grand Cruix for €34 and the more generic Cruix for only €28, both very affordable for what you get. We started our progressive crispy path with a semi-salted anchovy with pane carasau, very thin and crispy Sardinian bread, and some hollandaise sauce, all together a contrast of freshness, umami and rich fats.

In Spain we call it a marriage when salted (anchoa) and marinated/pickled (boquerón) anchovies come together; at Cruix, the happy couple showed up one after the other. The pickled boquerón we got next was dressed in a romescu sauce under a spread of minced pork chops, again all deposited on a delicate piece of Sardinian bread, resulting in an exuberant combination of flavors perfectly proportionate in size and intensity.

The roasted beet humus with mushrooms and tartufo was a tasty creamy vice in which we dipped the Sardinian bread, this time smoked, while the cod churro that followed was a fun twist on the ubiquitous sweet fried dough (which is a cousin of the buñuelo, an old and popular local fritter). In a clever twist, Miquel makes the traditional Iberian cod fritters into a churro shape using buñuelo dough, to be dipped not in chocolate but in a soft, light garlic foam. 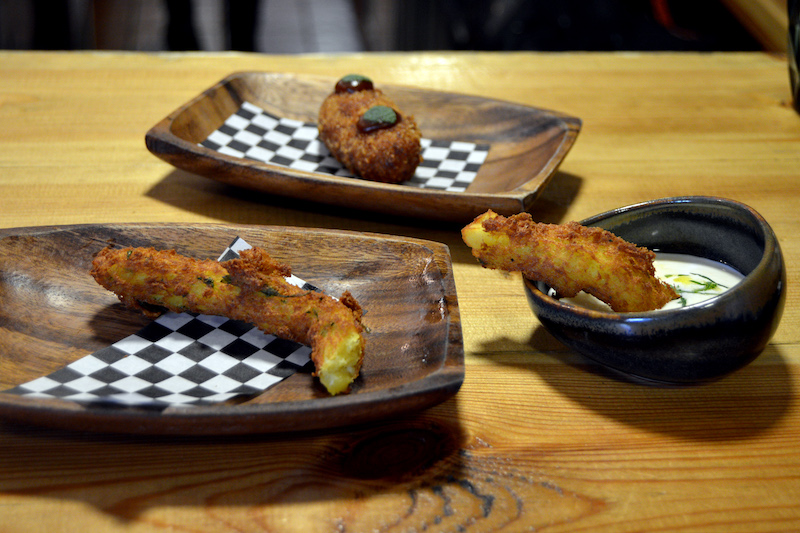 Next up was another Cruix classic, the Peking duck croquettes with kimchi sauce – a tiny bite with explosive flavor. From Asia we moved on to Mexico with a ray fish and trout eggs taco accompanied by a shot of very green tequila and completed with coriander, cucumber and lime.

After all that traveling, we come back home with a bang. The last dish arrived in a paella (the rounded pan) and with a spoon. The exquisite bomba rice was served slightly socarrat (with a very crispy bottom, but not burned) and flavored with delicious lágrima Ibérica, a small cut of Iberian pork taken from in between the ribs; fresh and crispy chopped green beans; roasted and smoked eggplant; and very thin layers of pancetta. Each ingredient was well calculated to add personality (the lágrima Ibérica), freshness (green beans), earthiness (smoked eggplant, first torched, then dehydrated in the oven) and depth (the succulent pancetta filled our palate without being overpowering).

It felt like we arrived at our destination, but there was still dessert to go: A perfumed and refreshing stew of strawberries and bananas, topped with tom kha gai ice cream (a riff on the Thai soup made with coconut, lime, ginger, lemongrass and galangal but sans chicken). Finished with walnuts and fresh herbs like basil and coriander, this sweet end to the meal elevated the entire experience, making us feel as if we’ve stepped into a hot air balloon, the crispy brightness carrying us higher into the atmosphere. 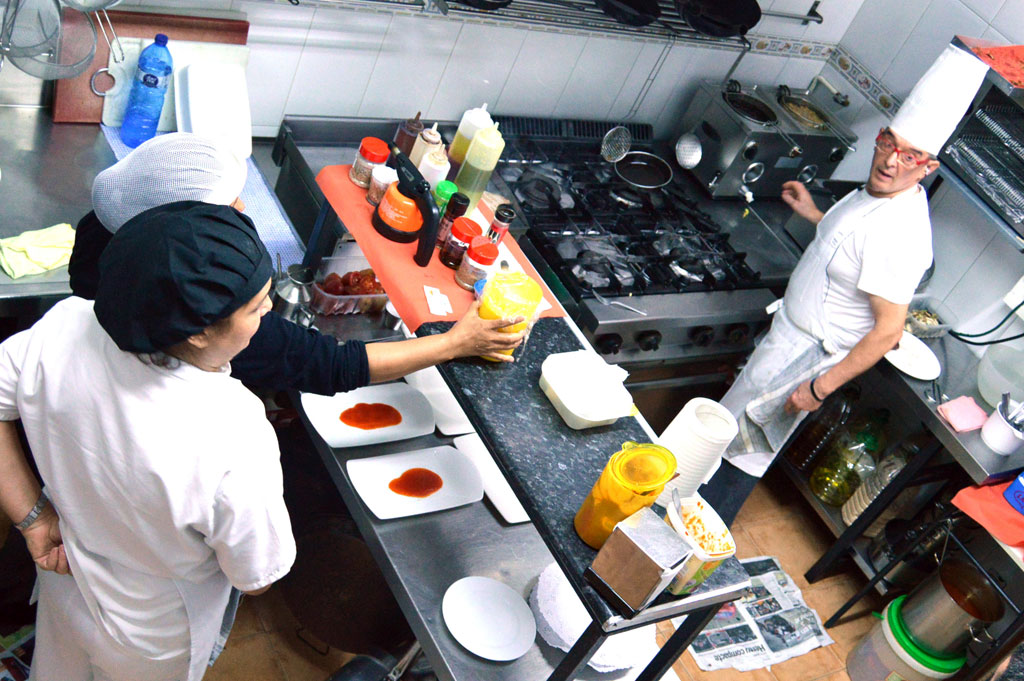 Barcelona | By Paula Mourenza
By Paula Mourenza
Barcelona[Editor's note: We're sorry to report that Vell Poblenou has closed.] When people think of rice and Spain, they think of paella. In Barcelona there are hundreds of places to eat paella. And every Thursday you can find it on the menú del día at most restaurants across the city. There’s more to Spanish rice… 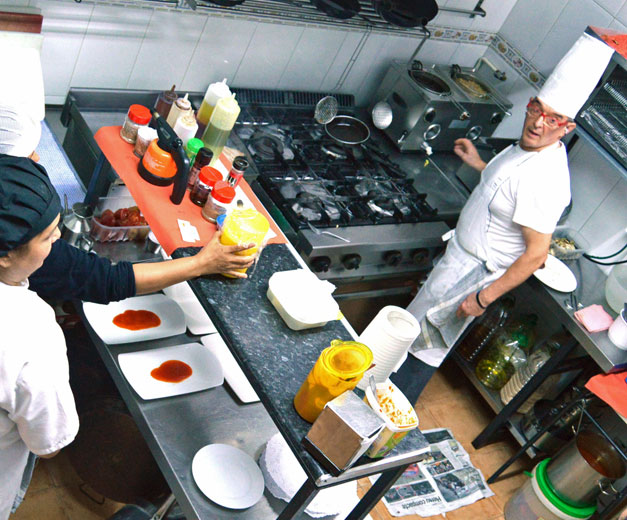 Barcelona | By Paula Mourenza
By Paula Mourenza
BarcelonaEditor's note: We're sorry to report that Vell Poblenou has closed. When people think of rice and Spain, they think of paella. In Barcelona there are hundreds of places to eat paella. And every Thursday you can find it on the menú del día at most restaurants across the city. There’s more to Spanish rice… 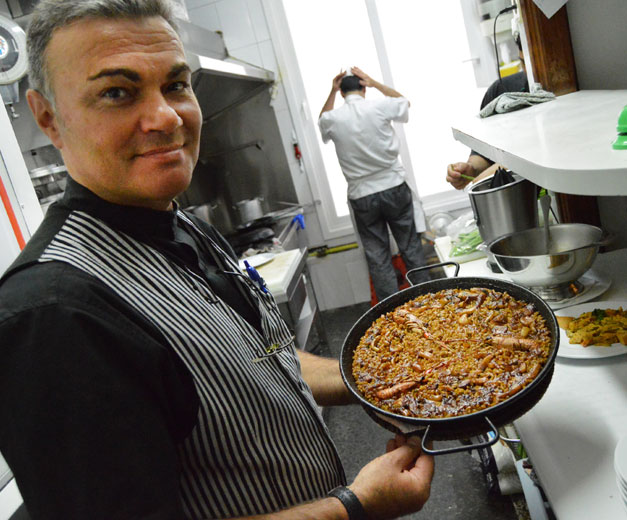 Barcelona | By Paula Mourenza
By Paula Mourenza
BarcelonaSome restaurants are enjoyable because they continually offer surprising, innovative creations, while others we like for the opposite reason: because they are reliable in their simplicity and homey traditional preparations. Envalira belongs to the latter. Fried items are cooked in pans, using fresh olive oil each day, not in an electric fryer; everything is made…
Cruix
Carrer d’Entença, 57, La Nova Esquerra de L’Example
Tel. +34 935 25 23 18
Web: www.cruixrestaurant.com
Hours: Tues.-Sat. 1-3:30pm & 8-10:30pm