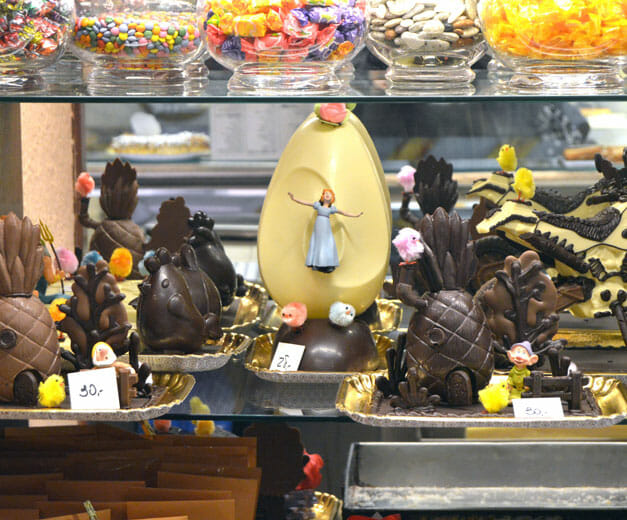 In the weeks leading up to Easter, Barcelona looks like an extension of Willy Wonka’s factory-fun house: chocolate castles, houses, animals, cars, motorbikes and even cartoon characters and fútbol celebrities fashioned out of cacao populate the city’s traditional patisseries. Catalonian confectioners expect to sell some 600,000 chocolate sculptures decorated with yellow chicks, chocolate eggs and cakes studded with hard-boiled eggs and colored feathers this year. The last are known as monas, and godparents traditionally give these to their godchildren throughout Catalonia and other parts of Spain to mark the holiday.

This time of year, the best confectioners in town erect astonishing and fantastical chocolate constructions and display them in shop windows. (The practice has even extended beyond this time of year to become a professional expression of the local chocolate-making industry.) The Escribà family, who own one of the most iconic patisseries in Barcelona, have created numerous splendid chocolate sculptures and monas for companies, TV shows, celebrities like Ferran Adrià and occasions like the 1992 Olympics. Other famous examples include Joan Bacell’s enormous dark-chocolate Statue of Liberty, made in 1984 for The New York Times, and the impressive scale reproduction of the Sagrada Familia, which was made by a team led by Jordi Sempere of the Gremi de Pastisseria de Barcelona, the city’s pastry chef association, and which required 50 kilos of chocolate, rested on a 70-cm-by-70-cm platform and reached 120 cm in height. 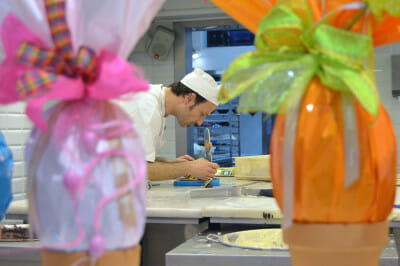 Some of these wonderful visual confections – reproductions of monuments, scenes taken from classical history and abstract original creations – are on display at the Museu de la Xocolata in El Born. Perhaps the best part of visiting this temple to the chocolate arts is being able to satisfy your craving for sweets in the museum shop. Besides traditional and modern monas, there are chocolate vinaigrettes, cacao paste jams and chocolates flavored with olive oil, spices, fruits and liqueurs.

The museum, created by the Gremi de Pastisseria in 2000 and now one of the most visited attractions in town, shows the role of cacao through human history and its connection to Barcelona, from the sacred drink consumed by the Aztecs in Mexico to the arrival of cacao from America to the Spanish Cistercian monasteries in the 16th century and its introduction throughout Europe by the Jesuits and the Spanish monarchs.

In the 16th and 17th centuries, ships carried cacao from the Americas to port in Barcelona, and ships distributing cacao to the rest of Europe departed from there. The city was awash in the stuff, so it was only natural for local artisans and specialty businesses to set up shop.

The original way to prepare and serve this new product in Europe was as a thick, hot, bitter drink. To this, Spanish monks began adding sugar, vanilla, agua de azahar (orange flower water) and other ingredients to make the end result more palatable. After the Industrial Revolution in the 18th century, chocolate went from being a very expensive drink for aristocrats to a popular product available to many. Further advancements in processing cacao brought chocolate in solid form to consumers. 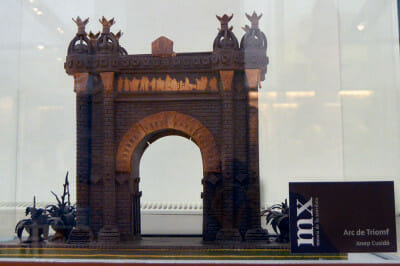 By the 19th century, Barcelona was at the forefront of chocolate making and innovation in Spain. Iconic avenues like Paseo de Gràcia were home to many chocolate factories, such as La Juncosa, now Casa Fuster, and Casa Ametller, which is no longer. Today the city maintains this legacy through traditional granjas such as Dulcinea or La Palleresa, which serve hot chocolate and sell Easter monas, as well as through the many patisseries that continue to produce singular, sweet specialties out of their own workrooms. 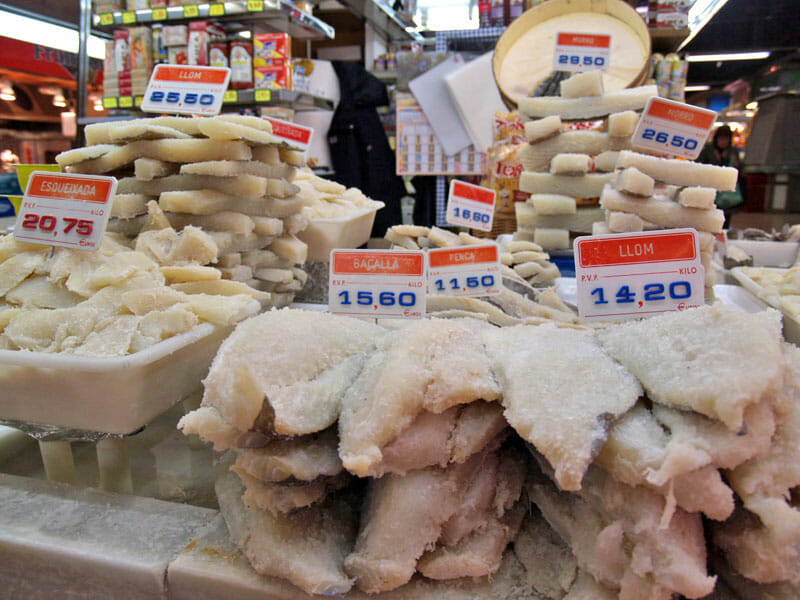 Barcelona | By Paula Mourenza
By Paula Mourenza
BarcelonaEditor’s note: This post wraps up “Spring (Food) Break 2013,” our weeklong look at the favorite foods of the spring season in each city Culinary Backstreets covers. In Spain, preserving the rituals of Lent – historically a period of 40 days of prayer, penance and pious abstinence from eating meat that leads up to Easter – was…