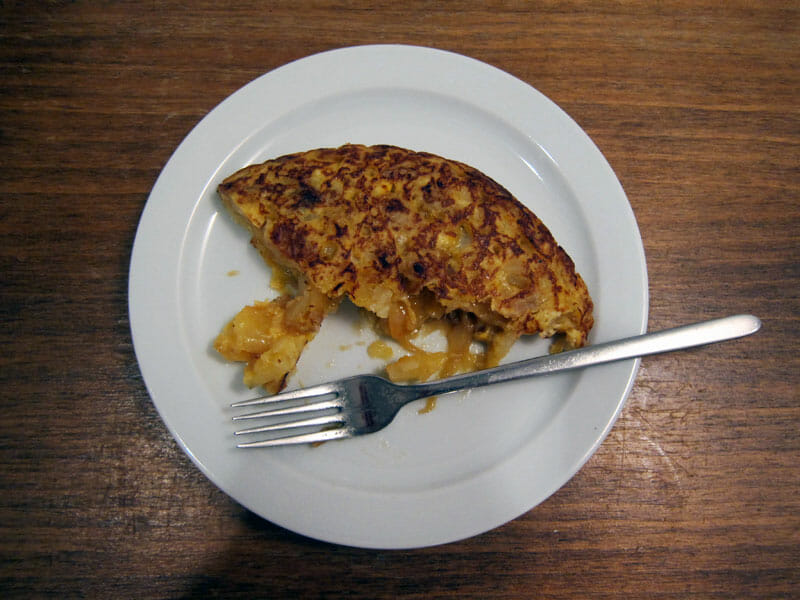 Dear Culinary Backstreets,
In just about every restaurant or bar I’ve been to in Barcelona, I’ve seen a dish called “tortilla.” What exactly is a tortilla and can you recommend any places where they are done especially well?

Although it would seem that much of the world imagines the inhabitants of Spain subsisting largely on paella, the truth of the matter is that it is the tortilla española, also known as tortilla de patatas (truita de patata in Catalan), that  really holds the place of honor in the hearts and stomachs of Spaniards. Often translated into English on menus as “potato omelet,” this hearty round cake of potatoes, eggs, olive oil and salt has nothing to do with the traditional French omelet, nor does it have anything in common with a Mexican tortilla. At its most basic, the Spanish tortilla is made by frying up a thick mass of sliced potatoes and eggs in olive oil and then slicing it into savory wedges.

The tortilla is also incredibly versatile and can incorporate a dizzying array of supplementary ingredients, including (but certainly not limited to) spinach, garlic, leeks, parsley, asparagus and onions. It can be eaten for breakfast, lunch, dinner or a snack, and not only will you see it in every tapas bar you pass, but it also makes appearances on school lunch menus (at the rate of at least once per week), at birthday parties and at picnics. You will even see this already carb-heavy dish stuffed between two slices of bread and served as a sandwich! In short, it is the ultimate go-to comfort food and the dish that Spaniards throughout the country most associate with home.

What makes a good tortilla? The answer depends on personal taste and everyone will tell you something slightly different. There are debates on everything from whether or not a tortilla should include onions, to how the potatoes should be sliced (in thin rounds or in chunky squares), to just how runny the eggs in the middle should be, with some liking their tortillas un poco crudito (a little undercooked) on the inside and others preferring a more well-done version. 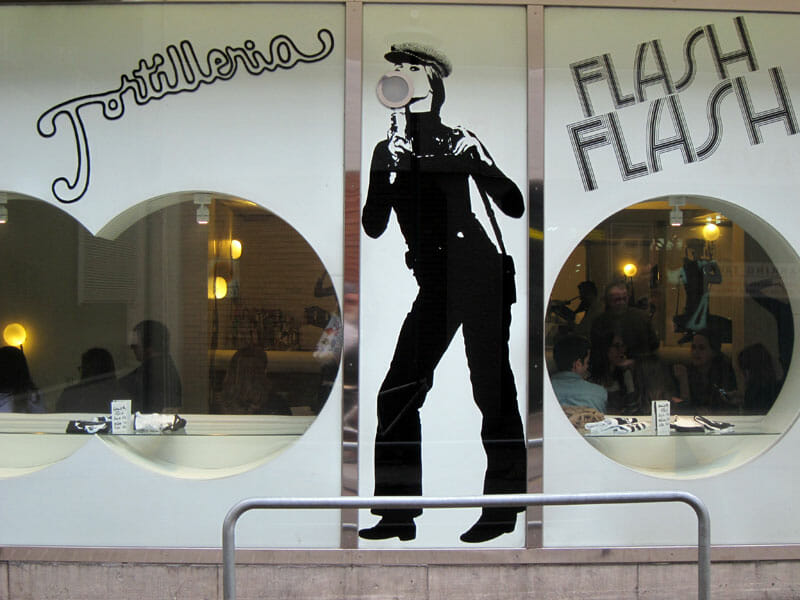 This classic Spanish dish is available virtually everywhere that serves food in Barcelona, and it is rare that you will come across one that falls flat. But there are exceptional versions to be found. One of my favorite venues is Taktika Berri, a family-run Basque bar and restaurant in the Eixample Izquierda that makes an especially good tortilla de bacalao (tortilla with cod).

For excellent tortillas in a truly unique atmosphere, I’m partial to Flash Flash, the city’s most famous tortillería. Opened in 1970 by fashion photographer Leopoldo Pomés and his wife, the restaurant (located in the upper Eixample) serves an astounding 70 varieties of tortilla, including ingredients such as morcilla (blood sausage), artichokes, black truffles and potato chips. (If in doubt, order the Catalan classic tortilla de samfaina, with a filling similar to ratatouille.) Stepping into Flash Flash – with its spare black-and-white color scheme and enormous vintage photos of Pomés’s model wife covering the walls – is like being time-warped back to the swinging sixties and serves as a reminder that in Spain, the tortilla is really something of a star. – Johanna Bailey