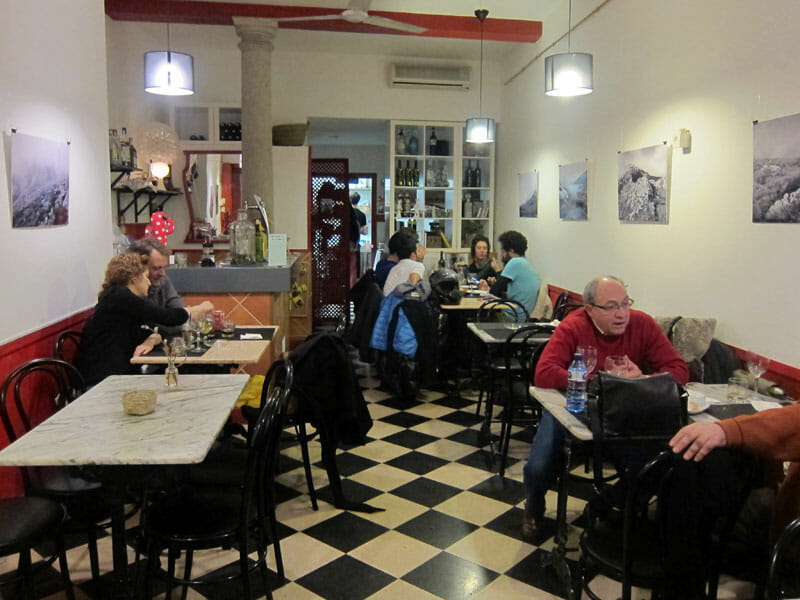 When Xisca Ferragut left Mallorca (the largest of the Balearic Islands, located in the Mediterranean Sea off the eastern coast of Spain) and moved to Barcelona, she had no intention of opening a restaurant. Having lost her job back in Mallorca, she had decided to study sign language and become an interpreter. Then her boyfriend, Dionis Ballester, showed up and as the two struggled to find work, they noticed something: there were literally NO Mallorcan restaurants in Barcelona.

Between Xisca’s entrepreneurial streak and Dionis’s love of cooking, over idle dinner conversations at their favorite Barcelona pizzeria they began to dream of opening a Mallorcan restaurant. When, shortly after, they saw that the pizzeria was for rent, they did just that, and thus Na Mindona (whose name comes from Xisca’s family’s nickname) was born.

“Mallorcan cuisine is very different from mainland cuisine!” exclaimed Xisca in response to our unknowing query on the matter. “We use a lot of ingredients in our cooking that are hard to find in Barcelona.” To back this up, Dionis kept popping out of the tiny kitchen in the back of Na Mindona with various crumpled baggies of spices not commonly used in Spanish cooking, such as allspice; handfuls of fresh herbs; and tales of hard-to-find ingredients including purple carrots and fresh marjoram. Consequently, whenever the pair gets visitors from the islands, they come bearing suitcases full of Mallorcan herbs, spices, sausages, cheeses and other ingredients Dionis and Xisca deem necessary for their Na Mindona creations.

Appropriately, Na Mindona is located on a narrow back street in El Raval, a neighborhood long the center of Barcelona’s immigrant population that is scattered with halal butchers, sari shops, Indian grocers and North African sweets shops. The area also has a history of drugs and crime and, despite major cleanup efforts in recent years, it still retains a bit of a seedy atmosphere, especially after dark, when most of the shops’ graffiti-covered metal shutters have been pulled down for the night. With its whimsical sign featuring splashes of color and sign-language symbols, Na Mindona stands out like a beacon. 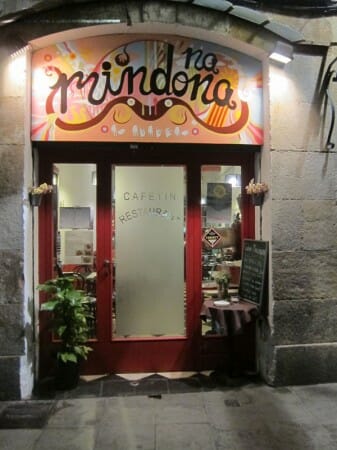 On the night we went, the tiny restaurant was filled with people and delicious aromas. The handwritten menu consists of a few plats del dia (daily specials) and several affordably priced dishes that can be ordered as either small tapas or larger raciones. Naturally, we had to try Mallorca’s famed sobrassada amb mel, or sobrassada (a soft, paprika-flavored Mallorcan sausage) with honey. The combo is the ultimate marriage between savory and sweet; the sobrassada was so finely chopped that it seemed to melt with the honey right into our tongues. We also tried the frit, a peasant dish consisting of a delicious mess of fried lamb, liver, onions and potatoes. Though we were tempted by the caragols (snails) stewed with mint, fennel and marjoram, in the end we went for one of the plats del dia, the tombet, a dish of finely sliced fried potatoes layered with eggplant and peppers and then slathered with tomato sauce and grilled until bubbling hot. The result, which reminded us of a sort of lasagna-ized ratatouille, was delicious.

Dessert is an affair in itself, and we recommend saving room for it. The ensaïmada, a spiral-shaped pastry made using pork lard and topped with a generous dusting of powdered sugar, is Mallorca’s most famous sweet. At Na Mindona, Xisca and Dionis take the ensaïmada a decadent step further by combining it with eggs and cream and baking it into a gooey bread pudding. We also ordered a serving of the almond ice cream and a slice of greixonera de brossat, a cheesecake made with Mallorcan brossat (a fresh cheese similar to ricotta, also known as mató in Catalan), lemon, cinnamon and honey. The sorbet-like “ice cream” – which in fact contained no milk or cream – provided the perfect complement to the rich, creamy cheesecake, which was less sweet than American versions but just as pleasing.

On Xisca’s recommendation, we took our coffee with a splash of sweet Mallorcan Amazona rum. Too sated for anything else, we would have to try the other after-dinner digestivos – including licor de hierbas, an anise-flavored liquor made with extracts of herbs such as rosemary, fennel and lemon verbena, and ice-cold Palo de Mallorca, a dark, dense liquor made from cinchona bark, gentian root and caramelized sugar – on our next visit.

By now it had become clear to us that Xisca was right: Mallorcan cuisine is a unique mix of ingredients and flavors. We found ourselves wanting to see the island for ourselves, to maybe get our hands on some of those purple carrots. In the meantime, at least we have Na Mindona to take us to Mallorca. 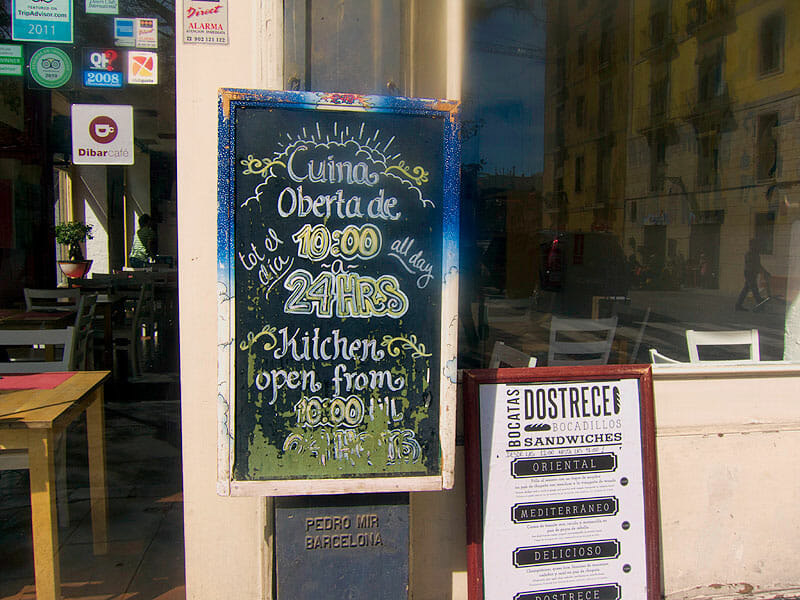 Barcelona | By Johanna Bailey
By Johanna Bailey
BarcelonaDear Culinary Backstreets, I hear that Spaniards take their dinner very late. Are there any good restaurants in Barcelona that start serving dinner before 9 p.m.? Indeed, Spaniards are notorious for eating late. Even when dining at home, the typical Spanish family doesn’t eat their dinner until around 9 or 10 p.m. – or sometimes… 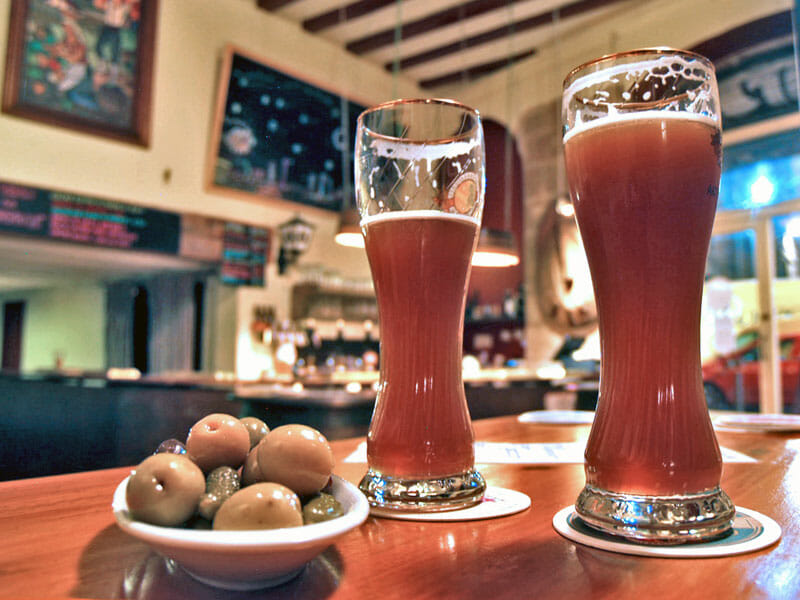 Barcelona | By Paula Mourenza
By Paula Mourenza
BarcelonaEditor’s note: We regret to report that La Cerveteca has closed. Once a mostly beer-free country, Spain – traditionally a land of wine drinkers – has recently started to develop a taste for the sudsy beverage, and Catalonians seem to have been the main pioneers behind this growing trend. The number of local craft breweries…