We’ve written a great deal about all the traditional Catalan, Basque and Spanish food around town, but what about the modern, globally influenced cooking that’s taken hold in the food capitals of the world – of which Barcelona is certainly one? La Pepita is a prime specimen, with its passionate, creative young owners and food that, while anchored in the tapas tradition, reinterprets classic dishes through the cross-pollination of other cultures’ ingredients and ideas.

Sofía Boixet and Sergio Andreu started La Pepita in 2010 with not very much money but with plenty of help from friends and family. They had recently returned from Paris, where Sergio was working for Fogón, a well-regarded Michelin-starred Spanish restaurant. At La Pepita, Sofía takes care of the front of the house, while Sergio fine-tunes the menu with the creativity of an industrial designer and the know-how of a chef with a distinguished pedigree, taking as inspiration the latest innovations in the culinary sphere. 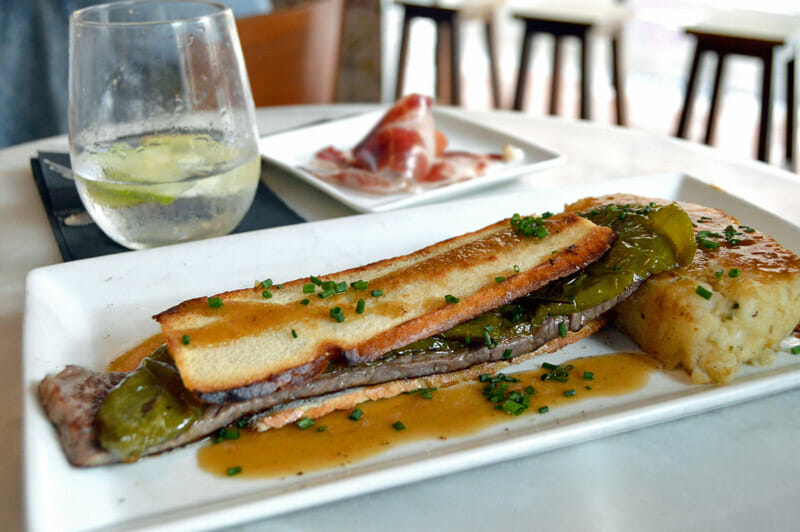 La Pepita herself is a record of their lives. The subway tile lining the walls of the long venue is covered, fittingly, with graffiti scrawled by clients and friends – a kind of nod to the Paris métro. The traditional azure-painted tile of southern Spain brings Andalusian charm to the space behind the counter, where hams and strings of garlic and peppers hang. The food sees the same mix of old and new, globetrotting and local.

From the night menu, for instance, we tasted a lusciously creamy foie mi-cuit crowned with white chocolate scented with green tea and topped with a leaf of shiso (a fragrant Asian herb related to mint). We were also totally seduced by the highly unusual tapa of Cantabrian anchovies with dulce de leche (the Argentinian confection made with caramelized milk): a slender piece of bread cradles an anchovy thickly daubed with the rich, oozing caramel, which files the edges off the salty fish.

Another big hit at the place is the gilt-head sea bream, marinated in olive oil with citrus and herbs, served with tender spinach, sliced fresh strawberries and the earthy crunch of pine nuts, all dressed with basil-infused olive oil, red pepper sauce and a few drops of a balsamic vinegar reduction. There’s a lot going on, but in the best way: it’s as if different colored lights turn on and off inside your mouth as the contrasting flavors interact. We think it’s brilliant. 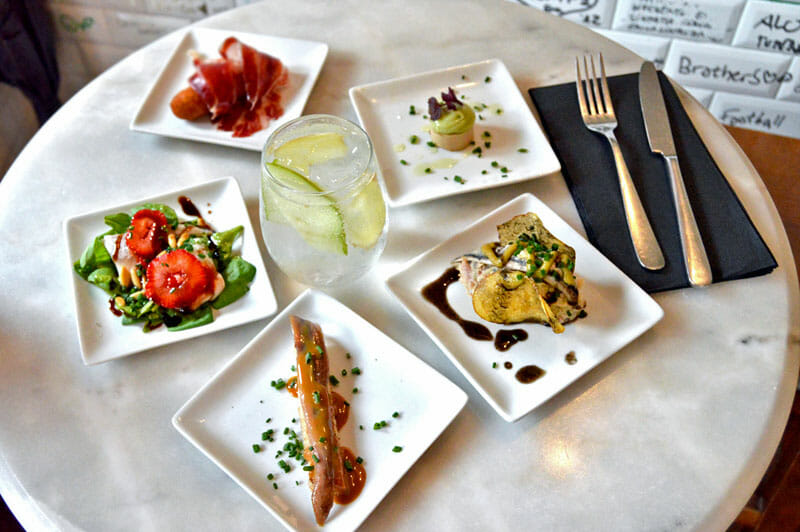 And what of the namesake of the restaurant? La Pepita is the “female” version of the Pepito, a baguette filled with veal steak that is a classic Spanish dish. Their version, Sofía explains to us, is lighter and more elegant, with two very thin slices of bread holding perfectly cooked steak and covered with traditional veal jus. And at La Pepita, this sandwich is just the jumping-off point, with numerous variations: Pepita Napolitana with mozzarella and dried tomatoes, hamburger Pepita, tuna Pepita, salmon Pepita, vegetarian Pepita, Pepita with foie and fried eggs or, to really gild the lily, the Pepita Gin, which comes with a top-notch gin and tonic on the side.

Like much else at this enticing spot, these sandwiches take the local and make them deliciously global. And we can’t wait to taste where La Pepita goes next. 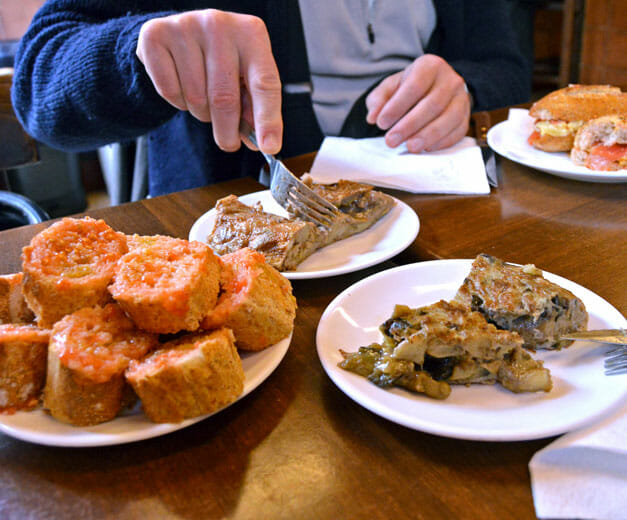 Can Ros: Put a Fork in It

Barcelona | By Paula Mourenza
By Paula Mourenza
BarcelonaEditor's note: Our penultimate installment for Breakfast Week here at CB comes from Barcelona, where the traditional Catalan breakfast is not for the faint of heart – or appetite. Fried pig’s ears fortified with garlic and parsley, veal cheek and tongue laced with vinaigrette, hefty veal and pork meatballs, creamy artichoke or eggplant omelets or a…