Editor’s note: This post is the second installment of “Best Bites of 2013,” a roundup of our top culinary experiences over the last year. Stay tuned for “Best Bites” from all of the cities Culinary Backstreets covers.

Forn Baluard
We started the year off heating our hands near the wood-fired oven at Forn Baluard, one of Barcelona’s top bakeries. It hasn’t been around long, but it has decades of experience in its DNA, as it’s headed up by Anna Bellsolà, a fourth-generation baker. People from all over make the trip to Barceloneta, the old port neighborhood, just for Baluard’s breads, which are handmade from natural flours and yeast and whole grains, without additives and using a lengthy fermentation ranging from 15 to 18 hours. The result: loaves with a heady aroma, intense flavor and appealing textures. And besides bread, Baluard also makes perfect croissants. 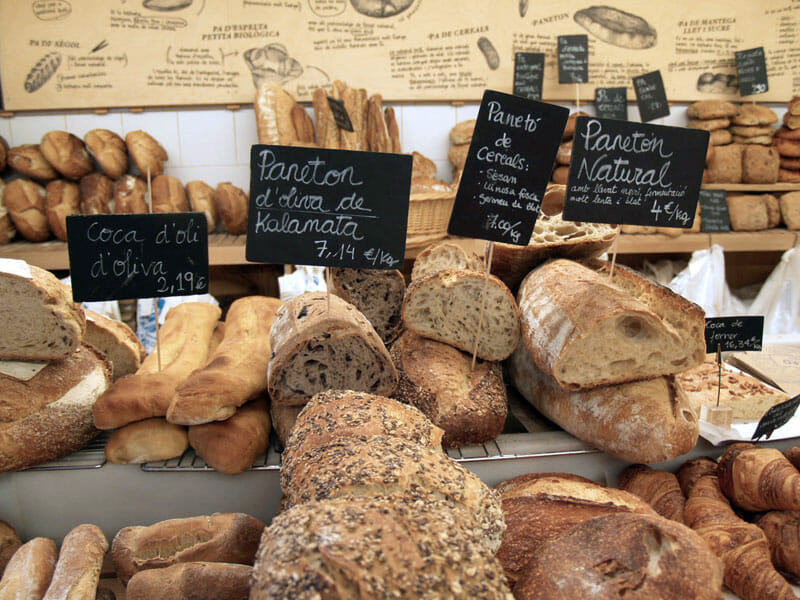 Forn Fortino
This 80-year-old family-run bakery in Gràcia has one of the few wood-fired ovens in the city, and in addition, all the breads are baked on stone. Fortino specializes in traditional and healthy loaves made without additives but that keep for a long time. The impressively wide-ranging variety includes breads intended for slicing, made with organic flours or different artisanal methods and with all kinds of grains, herbs and flavorful ingredients: besides spelt, rye, oats, wheat with poppy seeds and a touch of anise, there are also soy and ginger, coriander, olives with grapes and beer, and Fortino’s famous orange bread. The bakery also makes healthy – and delicious – cookies using whole grains, herbs, nuts, fruits and spices.

La Biblioteca Gourmande
This year we found inspiration and pleasure time and again at La Biblioteca Gourmande, a bistro that specializes in seasonal Catalan dishes. Chef-owner Guillem Oliva treats each of his organic ingredients with care and thoughtfulness to identify the best ways to cook them and to express their true essence. Our favorites include the salads that are punched up with aromatic herbs, the dishes featuring Wagyu beef, such as “Tartar Bibioteca,” the roasted onion with mató cheese, honey and pine nuts and the wonderful lamb.

El Tast de Joan Noi
Also known as John Boy, this eatery consists of just a small bar with a grill next to the fish stall of the same name at the Mercat de la Llibertat in Gràcia. It’s one of our favorite neighborhood joints for a bite of great seafood and an excellent way to cap off our food shopping. The chef, Paco González, has 18 years of experience cooking fish in places such as the renowned restaurant Botafumeiro. He works his magic on simple dishes, like the grilled sardines, making them sublime. We also highly recommend the grilled tuna with walnut vinaigrette. 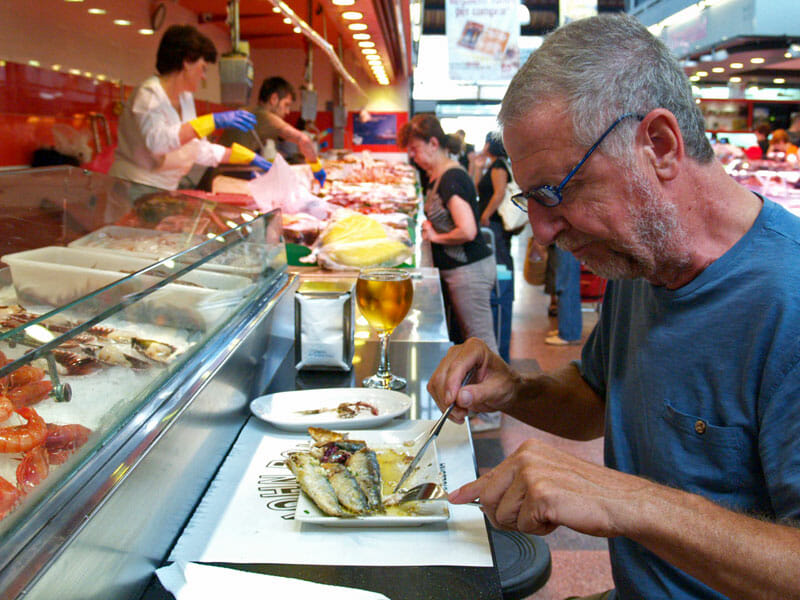 Bodega Bonavista
Summer in Barcelona is hot and wet. The streets are crowded with too many people (tourists on holiday and locals working), and the stress similarly fills our sweaty heads until we can get away from it all on our own vacations. When we’re stuck in the city, however, we can find relief in a refreshing glass of white wine at Bodega Bonavista. This summer, we tasted many lovely wines made in the D.O. Rueda, in Castilla León, from the verdejo grape, and which transported us far away with their aromas of pineapple, mango and passion fruit. One of our favorites was Shaya, made from a small quantity of exceptional juice from old vines. Fermented for a short time in wooden barrels, the wine has remarkable structure, a long finish and a fragrance that hints at minerality, herbs and tropical fruit. Christopher, one of Bonavista’s owners, recommended that we pair it with cecina, and we found that a sip of the wine cut through the fat of the smoked veal and, even better, resonated with the dish’s assertive, vibrant flavors – a perfect match.

La Pepita
Sofia Boixet and Sergio Andreu serve traditional tapas at their charming eatery: anchovies, ham croquettes, Russian salad and pepitos – make that pepitas, the couple’s take on the typical beef sandwich with green peppers that is lighter and more delicate than the original. They give all the old classics a bit of a unique twist, in fact. We still dream about the strawberry salad with marinated gilt-head sea bream, the “very important croquette,” made with jamón ibérico, and the incredible Cantabrian anchovies with Argentinean dulce de leche on toast.

Can Lluís: Menú Montalbán
Perhaps the most special meal of the year for us took place at Can Lluís on October 19, just one day after the tenth anniversary of Manuel Vázquez Montalbán’s passing. The beloved Barcelonan journalist, novelist and gastronome was the author of 9,000 articles, a tireless promoter of traditional Catalan gastronomy and the creator of Pepe Carvalho, a private detective who was embroiled in all kinds of political intrigue in Montalbán’s books. He introduced many of us to special places in Barcelona where one could have a remarkable meal. The iconic Can Lluís, which opened in 1929 in Raval (when it was the “Chinese” neighborhood of theaters and cabarets), was one of Montalban’s regular haunts. We got to try his favorite dishes: olleta d’Alcoy, a strong stew of baby squid with cardoons (or beans, in our case), a medieval recipe from Valencia; and roasted cabrito (kid goat) – tender, succulent and a great partner for a glass of good red wine (Dido, from La Universal, D.O. Montsant). 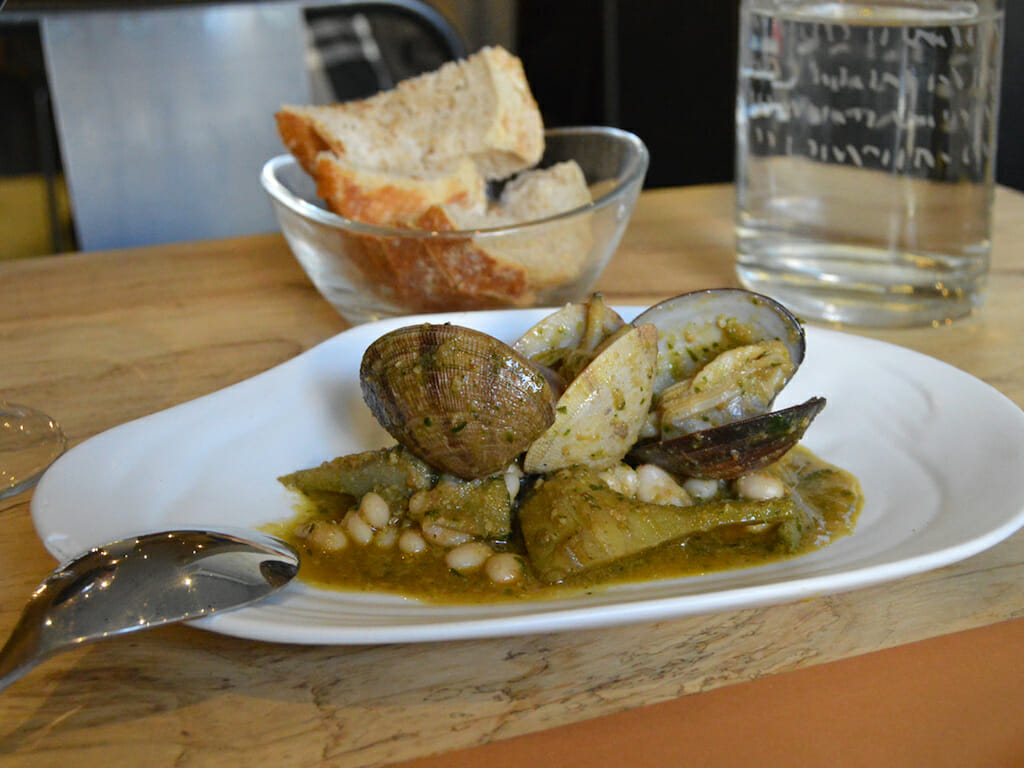