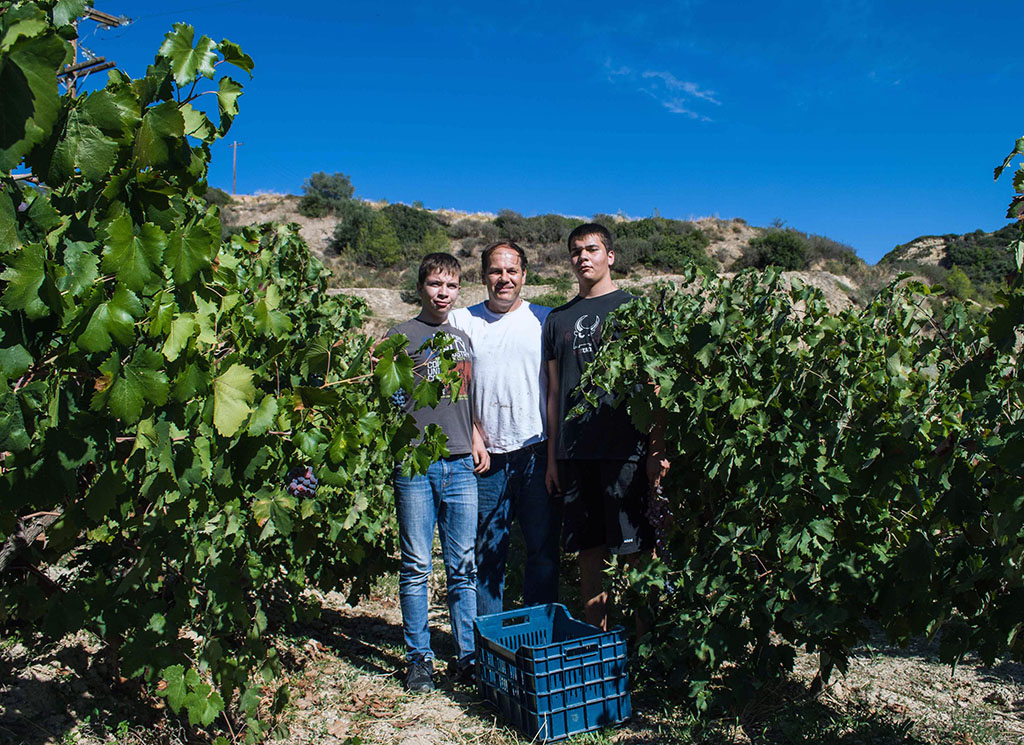 The Greek wine grape harvest is almost over. The dry and hot weather conditions throughout the year helped the grapes ripen earlier than usual, around ten days ahead of last year – a meaningful number when it comes to the delicate business of selecting what to pick for the harvest.

After the previous year, a disastrous vintage for many, producers in Greece’s major wine regions finally have something to be excited about.

The harvest that has us excited, though, took place just an hour’s drive from Athens, in a lesser-known wine region near Corinth. Here you can find the tiny vineyard of John Papargyriou, one of Greece’s most celebrated rising winemakers, with his wines selling out fast both at home and abroad. 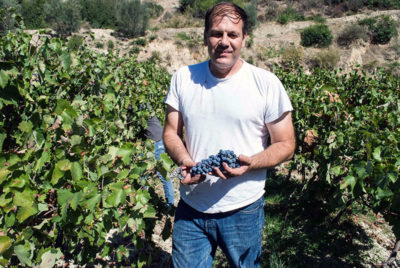 Papargyriou’s father, agriculturist Aristides Papargyriou and his wife Alexandra, bought the vineyard’s land, located in Corinth’s Lalioti valley, in 1978 and planted the area’s first commercial vines. The main varietals planted then were Assyrtiko, Sauvignon Blanc, Athiri, Cabernet Sauvignon and Agiorgitiko while later on Papargyriou discovered Moschoudi, a relative of the fragrant Muscadet, that became the winery’s flagship white varietal.

Following in the footsteps of his father, John Papargyriou studied agriculture at the University of Athens and then continued his studies at the Grape Breeding Institute in Geisenheim, Germany.

In 1996 John returned and took over the winery with the single-minded goal of making it one of Greece’s most celebrated. Over the years he expanded the vineyard, which now covers an area of 16 hectares and planted new varietals like the Portuguese Touriga Nacional, Italy’s Nebiolo, Syrah and the domestic Mavrodafni. Papargyriou started getting noticed in 2010, with his wines earning accolades – and medals – in international competitions. Today Papargyriou has achieved his original dream; he is considered one of the most “sophisticated” producers in the wine circles of Greece.

Not even the experienced John Papargyriou expected this complexity and finesse from his kids’ wine.

Back in the middle of October 2012, a few weeks after the winery’s harvest was concluded, John was very happy with the results. It was then that he realized he had forgotten to harvest one tiny plot in his vineyard, an area of a little less than an acre, just outside his home. The backyard was planted with old vines of Agiorgitiko and Touriga Nacional. He was certain it was already too late and decided to let the grapes rot.

This is where our story begins. His two youngest sons, Dimitris and Alexandros, 10- and 13-years-old at the time, announced one afternoon that they would harvest the small vineyard to make their own wine. John and his wife Eleni were skeptical in the beginning but decided to go along as long as it didn’t affect school.

In one weekend the determined children harvested all the vines. The berries were overripe with just some hints of botrytis – a fungus that affects grapes – and had already started shrinking. They 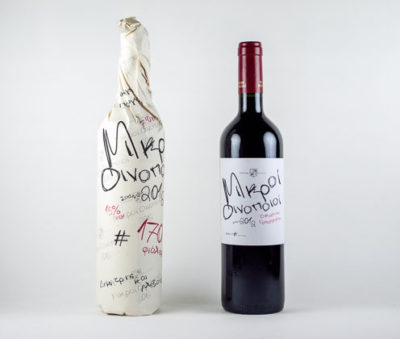 used the winery’s old winepress (called strofilia) to press the grapes by hand and went through all the winemaking procedures with their father’s help. The two kids were in charge, making all the decisions along the way. After a long extraction, the precious juice was then put in a single small oak barrel and was left to age for 12 months. It was bottled in just 170 bottles, wrapped in paper and numbered by hand. Deciding a name was not very difficult. This is how the legend of “Young Winemakers 2012 – Papargyriou Family” started.

The late harvest contributed to a pronounced degree of alcohol, which reached 15 percent. The color was an impressive ruby with purple hues in the glass. The nose was captivating and evolved as the wine remained in the glass. Notes of cherry, strawberry, sour cherry, fig and plum were followed by violet and sweet spicy aromas of cinnamon, cardamom and vanilla. Black pepper, licorice, coffee, chocolate and caramel notes completed the impressive aromatic bouquet. The mouth was rich, balanced, full of intensity and character. The juicy tannins and the accompanying acidity refreshed the palate while the warm toned alcohol added character and sweetness that emphasizes the fruit. Cherry, strawberry and sour cherry stood out while milk chocolate and spicy black pepper were pronounced in the very long aftertaste.

Not even the experienced John and Eleni Papargyriou expected this complexity and finesse from their kids’ wine.

In 2013 the recipe was the same, although the vintage gave 290 bottles. In 2014 an extra French oak barrel was added and with the help of their cousins, Dimitris and Nassia, they bottled 820 bottles, all numbered by hand. The 2015 vintage gave just 240 bottles, which will be released in the beginning of November.

This year they held their late harvest on October 9. The two boys, now 14- and 17-years-old, seem to know very well what they are doing. Since they’re not allowed to harvest during the school week, they chose a weekend a few weeks after the normal harvest ends just like they did the first time. Waking up rather late, they started harvesting at 9:00 am. The last berries were collected around 1:30 pm.

The grapes gathered amounted to 450 kilograms, just enough for around 250 bottles at the end. The next step included selecting only the best quality grapes and then crushing and pressing them at the winery’s hand-powered wine press before putting them in a single French oak barrel for fermentation and aging. We will have to wait for 12 months before it is ready to reveal its beauty. Based on past experience, everything indicates it will be worth the wait.

On Monday the kids went back to school. Life continues as normal. Expectations are high, though. Considering that their oldest brother Aristides is already studying oenology, the winery’s future seems to be in good hands. 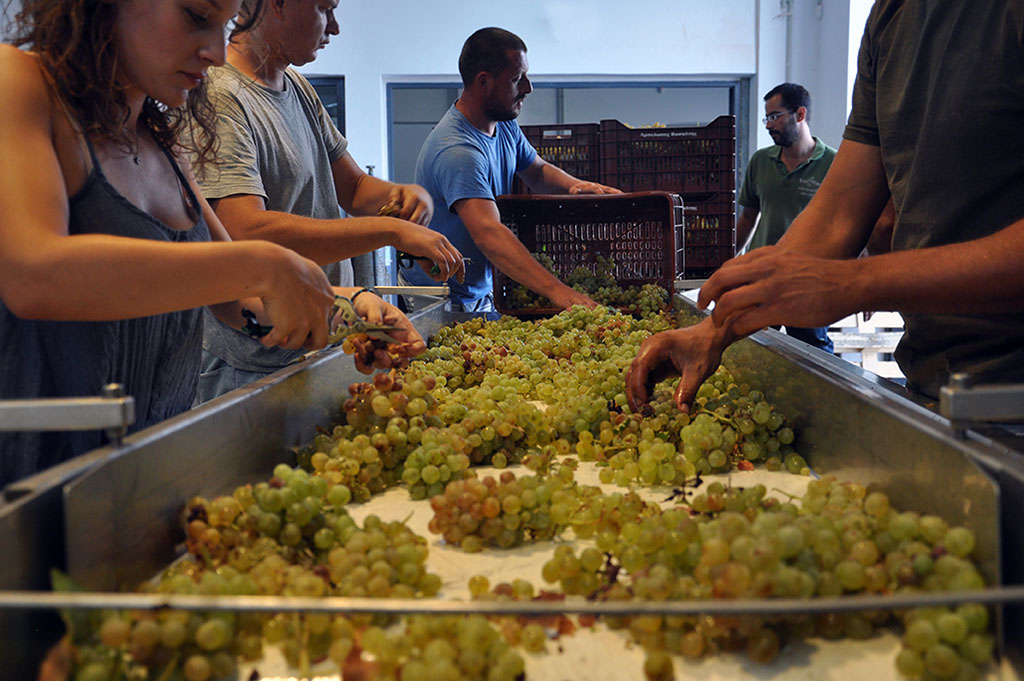 Athens | By Angelos Damoulianos
By Angelos Damoulianos
Athens -- There is an ancient saying in Greek, Theros, Trygos, Polemos, meaning “wheat harvest, wine harvest and war”: All three are situations that need immediate attention and cannot be postponed until later. Hopefully there will be no war, but having completed the wheat harvest, we are nearing the finish line of the wine harvest. All indications… 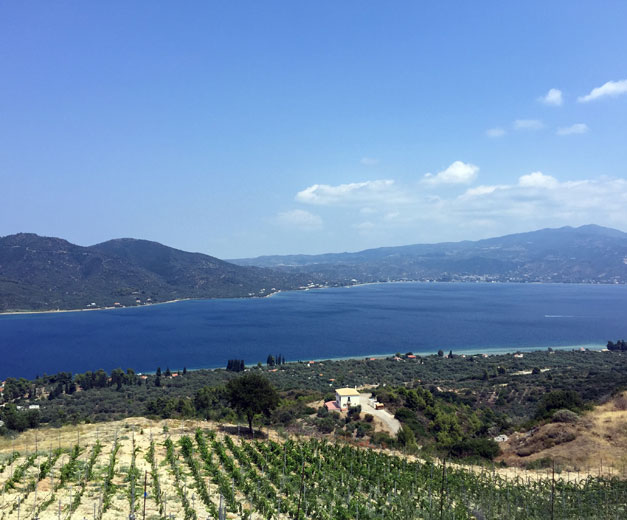 Athens | By Angelos Damoulianos
By Angelos Damoulianos
Athens -- There’s been a revolution taking place in Greece over the last couple of decades, and it doesn’t have much to do with the political and economic turbulence troubling the country – it’s all about wine. Wine in Greece, of course, has ancient origins: The first traces of it were discovered on the island of Crete… 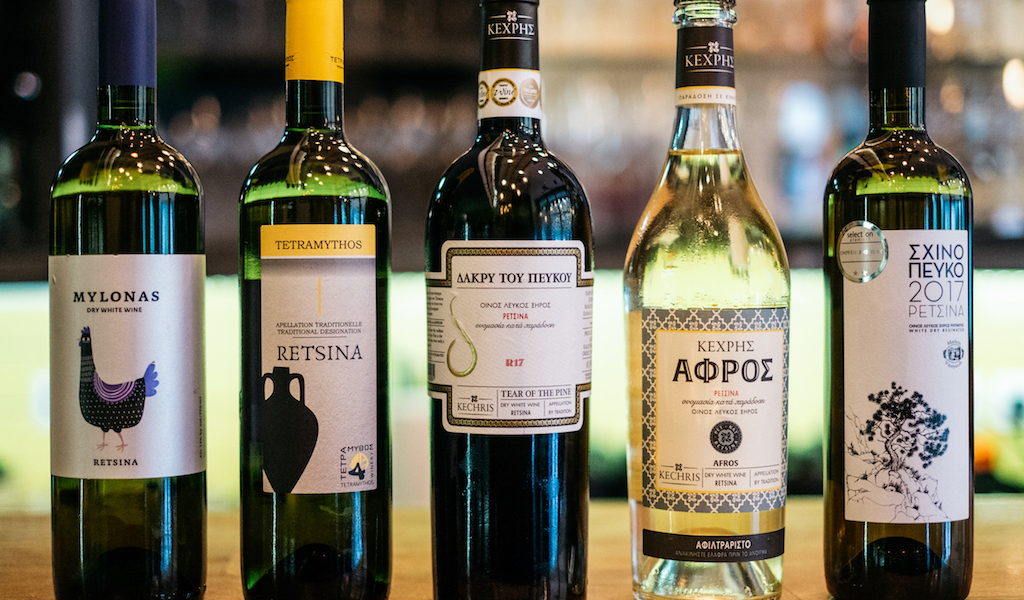 Athens | By Carolina Doriti
By Carolina Doriti
Athens -- Retsina has a bad rap. Many locals and foreigners associate this Greek classic with cheap “house wine” served at tavernas – you know, the stuff that is bright yellow in color, has an intensely resinous flavor and practically guarantees a headache the next morning. But we think retsina is just misunderstood. Increased demand…