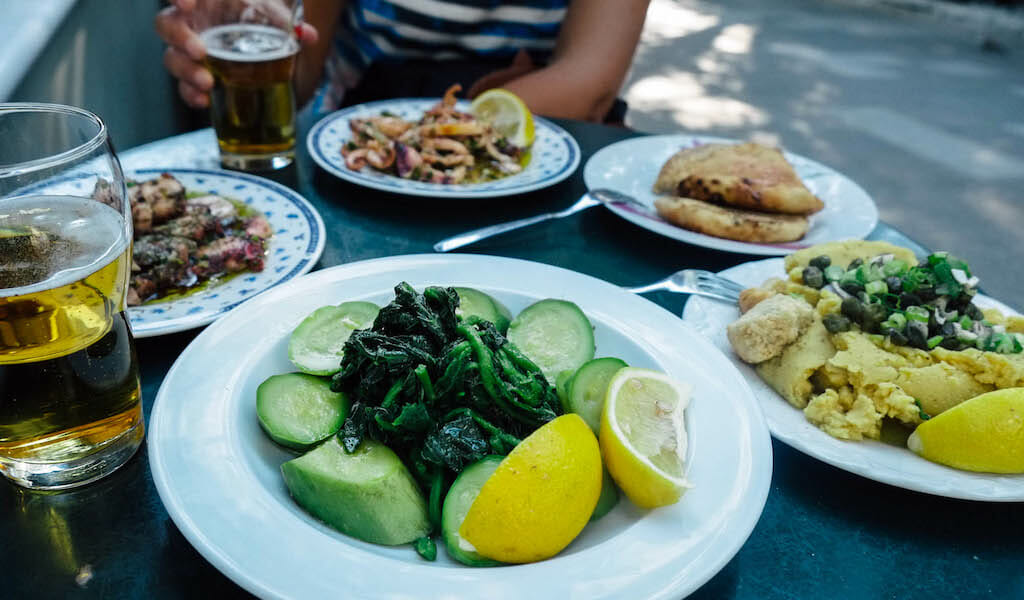 The blackboard hanging outside Dexameni’s cramped kitchen reads, “Kindergarten-Bar-Nursing Home,” the title jokingly bestowed upon the café by the eminent novelist and poet Alexandros Papadiamantis. He was among the literati who made Dexameni their regular hangout shortly after it opened in the early 1900s – so regular that the place ended up serving as a home-away-from-home for all stages of life. By 2009, however, Dexameni had lost its traditional, old-fashioned character, the prices had gone up and the municipality of Athens had begun asking for exorbitant rent, so it closed for a spell. Since reopening in 2012 under the management of two area bar owners, it has been very busy, with locals even queuing up for tables on warm summer nights (reservations are not accepted).

The café – built on a steep road that was once part of the Athenian countryside – and the neighborhood get their name (“cistern” in Greek) from the water reservoirs that were built here during Hadrian’s reign (A.D. 117-138), near the outskirts of beautiful Mount Lycabettus, in what is now wonderfully posh Kolonaki, downtown’s chicest area. The name stuck, not just for the area as a whole but also for its square (complete with an open-air cinema also called Dexameni), where children like to play football, ride their bikes and make noise. 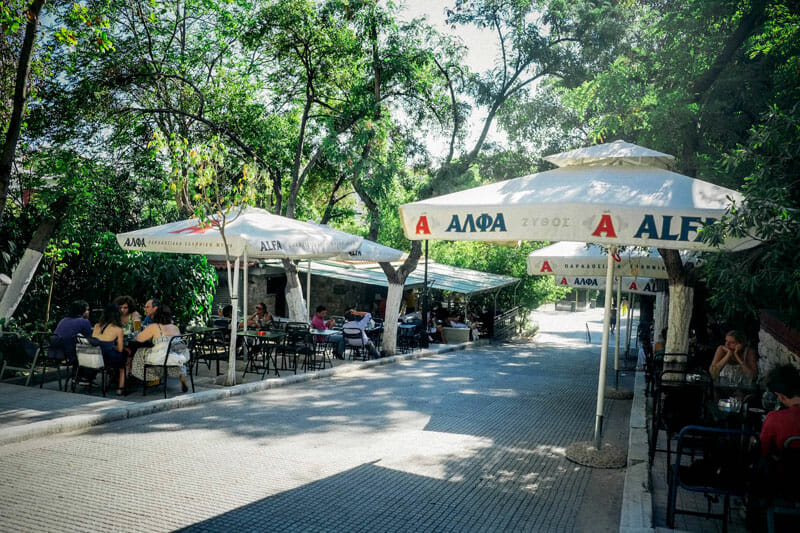 Dexameni is a largely open-air venue; it consists of a small stone building that houses the kitchen and bathrooms and that’s about it. The tables and chairs are scattered around outside on two wide, steep sidewalks, separated by a pedestrianized street. Half of the fun of eating here is the people-watching, which is a favorite pastime among patrons, especially in the summertime. Dexameni has always been that rare Athenian venue – a place for everyone at all times – and the new proprietors have made a point of keeping it that way. There are old men reading their paper in the mornings (a Greek coffee costs a mere €1.50), ladies who lunch after 1 p.m., students and businessmen dressed in suits who come for coffee and beer, and an endless number of children playing football, bicycling or playing hide-and-seek behind strangers while their parents eat with their friends. At night there isn’t a single age group not represented here. Kids play till late while their parents drink and dine, twenty-somethings flirt in big groups while nibbling on their meze plates, and older couples quietly look on.

The menu, which consists of tapas-like plates of meze dishes, is varied and offers exceptionally good value for the money. Dexameni does really simple, well-prepared meze plates that fall into two categories. There are the typical Greek mezes and taverna dishes, all made with tender loving care: boiled seasonal herbs with lemon, fried smelt, a fava bean dip topped with capers and fresh green onions. The second category consists of more playful twists on classic mezes, such as a grilled halloumi cheese with fig marmalade (usually including two or three whole sugared figs on top) and balsamic vinegar. This dish is impossible to stop eating and goes particularly well with ouzo or the light house white wine. 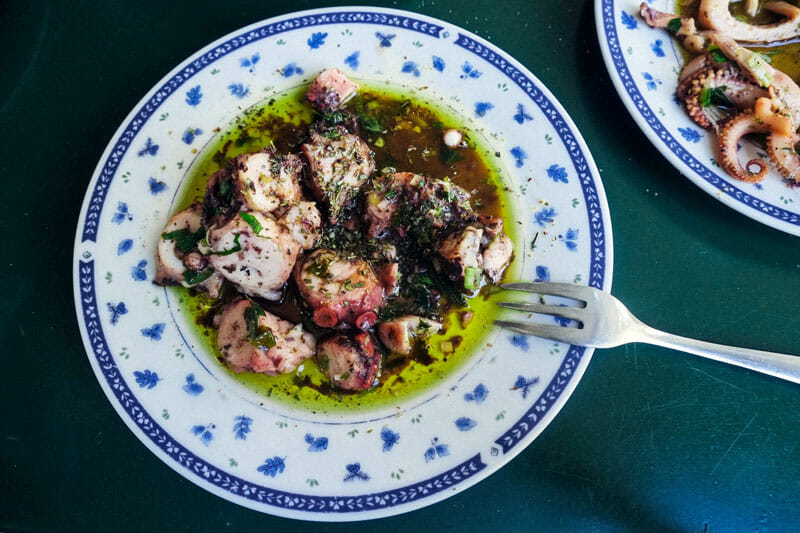 We are also fond of the plate of grilled beef patties with basil and almonds – a surprisingly light dish considering its meaty contents. Meanwhile, the cold salad of brown lentils with sun-dried tomatoes and manouri cheese (a white, semi-soft light cheese made from sheep’s milk that is a Protected Designation of Origin product) has a surprisingly summery taste and is always a good choice on a warm night. For diners looking for something more filling, the café does also offer more hearty options, such as a dish of eggs and fries served with grated cheese.

While offering a few innovations, the new Dexameni has at the same time managed to reclaim its piece of Athenian history. This long-treasured café continues to be one of the best places to eat and drink cheaply in downtown Athens. Papadiamantis would feel right at home.

This review was originally published on August 14, 2013. 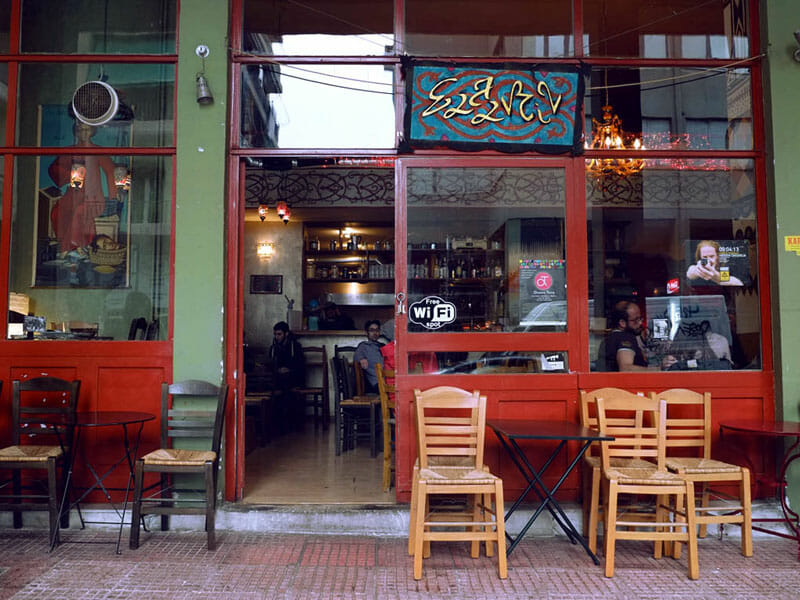 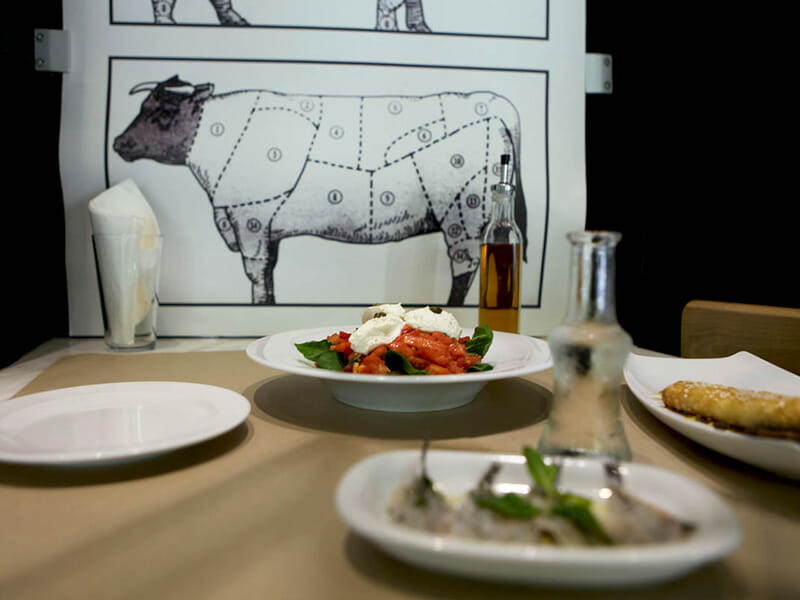